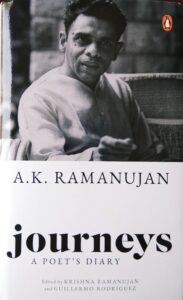 Attipate Krishnaswami Ramanujan (1929-93) was a poet, scholar, a philologist, folklorist, translator, and playwright- all rolled into one. His was a many-faceted personality. Ramanujan wrote in both English and Kannada;but his scholarship extended even  to Tamil, Telugu, and Sanskrit.

He wrote extensively and in a number of genres. But poetry was his forte. His poems are largely known for their enigma and ingenuity. Ramanujan’s every single composition had degree sophistication and each of them was resplendent with artistic sensibility. Two essential points of Ramanujan’s works are apparent: they were classical as well as modern; and he argued strongly in favor of local, non-standard dialects.

Ramanujan was born in Mysore, received his BA with honors in English Language and Literature from Mysore University in 1949, and did his Masters there. He was a lecturer in English at S.N. College, Quilon , Thiagarajar College, Madurai , Lingaraj College, Belgaum , and M.S. University, Baroda.

In 1959, Ramanujan went to the United States on a Fulbright fellowship, enrolled at Indiana University, where he was awarded a PhD in linguistics. He joined the faculty of the University of Chicago in 1962 as assistant professor, and was appointed professor in 1968. Ramanujan taught as a visiting professor at Harvard University, University of California at Berkeley, University of Wisconsin, Madison, and University of Michigan. At the time of his death, he was the William H. Colvin Professor in the Department of South Asian Languages and Civilizations, the Department of Linguistics, and the Committee on Social Thought. All this   had a profound influence on the poet.

Ramanujan was deeply influenced by a whole generation of poets, translators and scholars, in India and elsewhere. Evidently, there was a synthesis of the rich tenets of his ‘native culture and the detached outlook of the western thoughts.’ He was known for his superb sense of language and rhythm and was renowned for his ability to achieve restrained shifts in tenor.

He was a modernist to the core .Having grown up in British India, taught English literature in various colleges in south India before immigrating to the US when he was in his early 30s, he could hardly be other than modern.AKR  was the most influential modernist in Indian literature. 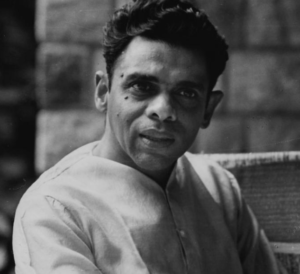 “AK Ramanujan – Journeys/A Poet’s Diary” is a new book on this scholar extraordinaire. With a foreword by his pupil Girish Karnad , the book opens a veritable window to the author’s innermost thoughts and the creative process he had undergone. Unpublished writings of Ramanujan which were preserved and catalogued at the University of Chicago have now been brought together in this magnificent volume. “Journeys” has been edited by Ramanujan’s son Krishna Ramanujan and Guillermo Rodriguez, who himself has authored a book on the poet-scholar.

As the blurb says, it was Rodriguez – founding director of Casa de la India, a pioneering cultural center in Spain – who ‘chanced upon Indian poetry in the translations of AK Ramanujan during a visit to India in the early 1990s which awakened his interest in the life and works of the poet-scholar.’

Apart from the  literary treasures like the translations of ancient Tamil and medieval Kannada poetry, as well as of UR Anantha Murthy’s novel ‘Samskara’, Ramanujan’s  private writings – journals, diaries, notes  and plentiful  personal photographs remained largely undisclosed. They are now public in this book.

‘Journeys’ contains Ramanujan’s accounts from the numerous travels he undertook; his contemplation on writing and the reverie where the seeds of his later published works were planted. Divided into five chapters and covering the period from 1949 till his death in 1993, the 350-page book has two introductions: one by Krishna and the other by Rodriguez. With a Postscript and Notes, this book is remarkable for its approach and the creative elements it encompasses.

After Ramanujan’s premature death, his journals, diaries, manuscripts, papers and other documents were handed over by his family to the Special Collections Research Center at the Regenstein Library of the University of Chicago in June 1994. Those exceptional documents are now part of this book. The hardback is a cosmic representation of the poet’s oeuvre. It has also some rare photographs of the poet culled out from his personal album. One among them is with Molly Daniels, wedding Day in Chicago, Illinois, June 1962.

‘Journeys – A Poet’s Diary’ is a composite and brilliant work on Ramanujan. It presents a decent portrait of a rare persona.

In the chapter ‘Travel Diary, 2 to 27 July 1959, Bombay to New York’. Ramanujan writes fascinatingly about Paris and the church of Notre Dame which was recently in the news: “The Gardens and the buses and the streets are full of silent crowds. The church of Notre Dame – with a tall spire with a weathercock on it, and two oblong towers to balance it on the side, swarms like any south Indian temple with figures of saints and animals – scores of water pipes in the shapes of lion heads.”

The book has anecdotes of the early years of his literary journey. It covers those moments of passage – both India and abroad – with microscopic detail. ‘Journeys’ has countless poems by the rhymester – the background, the milieu and the elucidation are precious.

The diary of 20th June 1993 –the very last entry of the bard’s life – is equally poignant: ‘Feeling of weakness, as if I hadn’t eaten. Eating helps, but the weakness returns. Not sleeping well, not taking any painkillers, the pain in the leg all right every other minute…. Yaman (lord of death), called caman or balance (folk etymology), because he punishes wrongdoers, those who mistreat women or under-payers to tale-tellers.’ 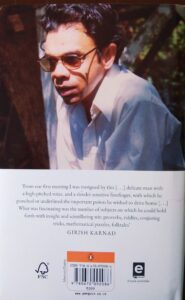 About Ramanujan’s creative medium, S.C. Harrex  observed: ‘A.K. Ramanujan used language with a surgeon-like precision, realizing that the secret of life is more likely to be found in the smallest rather than the most comic particles of existence.’

‘Journeys – A Poet’s Diary’ is a composite and brilliant work on Ramanujan. It presents a decent portrait of a rare persona.

(The reviewer is a senior journalist and Consulting Editor, OdishaPlus ) 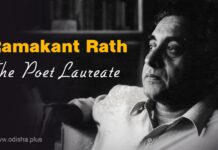 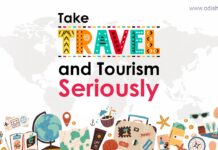