Hockey legends like Dilip Tirkey and Subhadra Pradhan or present generation stars like Deepsan Tirkey and Bipin Kerketta were born in Saunamara village in Balisankara block of Sundargarh district. The village is otherwise known as the ‘Hockey Village.’

These great players not only registered their strong presence in the Indian national squad, but earned names for themselves in world hockey for their extraordinary talent. Among them, Dilip and Subhadra once wore the cap of the Indian Men’s and Women’s teams, respectively. Moreover, Dilip Tirkey is leading Hockey India as President at present.

Another famous hockey star moulded from the soil of Saunamara is Amit Rohidas. During his long career, Dilip Tirkey was credited with playing 412 international matches for India, which is a record. However, the achievements of Amit Rohidas in the initial years of his career is something never accomplished by Dilip, i.e. winning a medal at the Olympics.

Amit: The Olympic Medal Wining Star
India won bronze in hockey at the 2021 Tokyo Olympics, thus ending a 41-year medal drought for the country, the last being the gold at the Moscow Olympics in 1980. The bronze medal winning Indian team, led by Manpreet Singh, had two Odia players hailing from Sundargarh district – Birendra Lakra and Amit Rohidas, who were privileged to wear the medal around their neck.

Apart from the duo, the rare honour of winning a medal in the Olympic arena has not been shared by any other player from Odisha. In the group matches at the Tokyo Olympics, the Indian Men’s Hockey team had edged New Zealand, Spain, Argentina and Japan. The Indian team trounced Great Britain in the quarter finals to enter the semis where they lost to Belgium. In the match for the Bronze, the Men in Blue thrashed Germany by 5-4 in a play-off.

Many believe that the historic success at the Olympics after 41 years signaled the revival of hockey in India. And among the architects of the revival was Amit Rohidas who not only cemented the defense line of the team, but was also instrumental in securing victory by successfully blocking many rival penalty corners from making way into the goal post.

Success at Other International Tournaments
Not just Olympics, Amit played a key role for the Indian team in securing medals and victories in a number of international tournaments. Those include Bronze at the World Hockey League held at the Kalinga stadium in Bhubaneswar in 2017, Silver medal in the Champions Trophy Hockey at Breda, Netherlands and the Bronze in the FIH Pro League in 2021-22.  Wearing so many medals at top-level international tournaments was certainly a unique experience for Amit.

Moreover, emerging as champions at the Asia Cup in Bangladesh in 2017 was no less an achievement than the series of success at competitions organized by the Federation of International Hockey. The Indian team had edged Malaysia 6-2 at the Asia Cup. Amit’s footprints were seen all through the tournament in nullifying rival attacks and scoring crucial goals for the team.

Amit Rohidas had also won a silver medal at the previously held Asia Cup tournament at Ipoh, Malaysia in 2013, silver at the Sultan Azlan Shah cup at the same venue in 2019, and silver at the Commonwealth Games at Birmingham in 2022.

Early Sports Life
Amit was born on May 10, 1993 to Gulapi and Gopal Rohidas. He is the youngest child of the Rohidas couple. His passion for the sport since early childhood took him to the sports hostel at Panposh where he received training. Though his childhood was spent in abject poverty, he overcame all obstacles in life by his sheer grit and determination and climbed the ladders of success.

He drew every ones’ attention after he led the Odisha junior team to success at the National School Games and the Nehru Cup tournament. Thereafter in 2011, he started playing at senior level and showed his brilliance at the National Games, and while representing Odisha at the National Hockey Championship.

Amit captained the Indian team for the Junior Asia Cup tournament at Malaysia in 2012. Next year, 2013, he got a berth in the senior team. Since 2017, Amit has been a regular player in the Indian Men’s Hockey Team at all competitions. 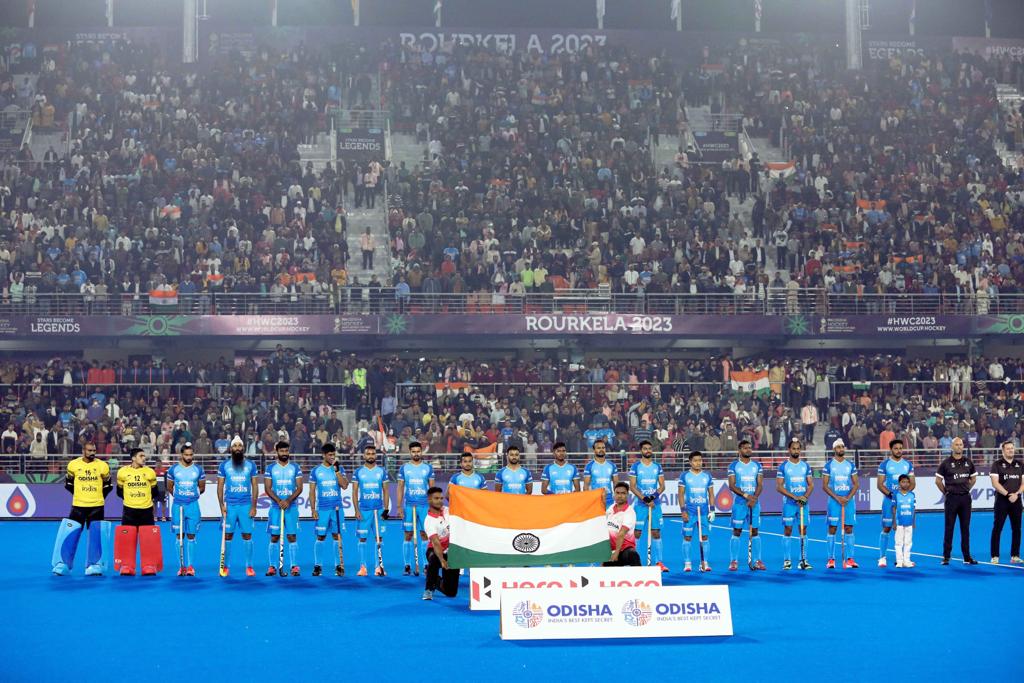 A Star of the Present and the Future
Undoubtedly, Amit Rohidas, a recipient of the Arjuna Award and Biju Patnaik Sports Award, is one of the brightest stars of Indian hockey at present. He is also viewed as a future star of this sport in the country. Amit, who impressed one and all for his extraordinary talents, has also led the Indian team as Captain on many occasions.

He is the vice-captain of the Indian squad for 15th edition of the FIH Odisha Hockey Men’s World Cup, 2023 which is being played at Bhubaneswar and Rourkela at present.

India had to abandon its podium dreams after losing in the quarter finals of the 2018 Hockey World Cup despite displaying splendid performance. In that backdrop, it has become all the more a challenge for the team to perform better this time if at all it aims at winning a medal. And, Amit will have to maintain more caution in holding his fort in the defensive area.