A proud Son of Odisha, Padma Shri Dr. Dilip Tirkey, who is aptly called ‘The Wall of Indian Hockey’, is among the few players who have left a mark in world hockey while bringing home bountiful glory. 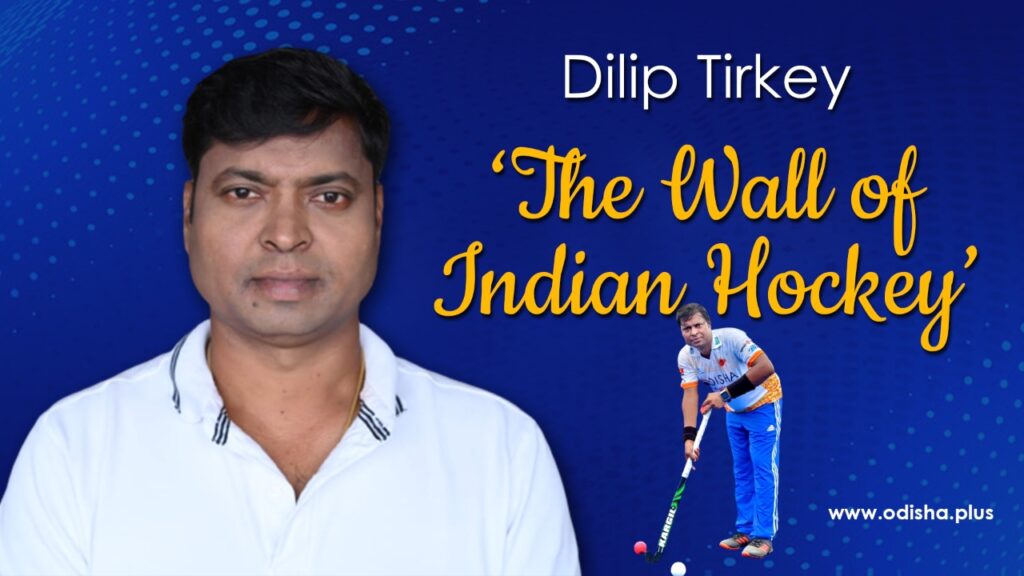 Hockey is our National Game. Odisha, especially Sundargarh district, comes first at the mention of hockey in India on account of the state’s invaluable contributions towards the game.

This is because hockey in deeply intertwined with the lives of people in tribal dominated Sundargarh district known for its towering hills, lofty peaks, steep ravines, dense forests and breathtaking landscape.

From the tribal heartland, around 50 young men and women have, so far, donned the cap of the National team and brought laurels to the country. From among the galaxy of high quality players the district has produced, Dillip Tirkey stands out as the brightest star, having earned the maximum fame and honour.

Born to Vincent and Regina Tirkey on November 25, 1977 in little known Saunramara village of Balisankara block in Sundargaeh district, Dilip is a gifted natural talent. His passion for the game and hard work helped him reach the pinnacle of success. It was his father Vincent, a state-level hockey player, who first put a ‘stick’ in his hand during his childhood days. Thus began his initiation with the game. The rest is history, as they say.

At an early age, Dilip was selected for the sports hostel during a talent hunt programme in 1989. Thus heralded Dilip’s hockey journey: from Saunramura village to the Sports Authority of India (SAI) hostel in Sundargarh, Nehru Cup hockey tournament in New Delhi and a berth in the National Junior Team. All these happened in quick succession. Dilip found a place in the Indian Hockey junior team for the first time in 1994.

After playing for the junior team for about a year, Dilip got a break in the senior men’s squad for the ‘Indira Gandhi Gold Cup’ at New Delhi in 1995. For his brilliant performance in the tournament while playing in defensive position as a ‘Defender’, Dilip sealed his position as a regular player in the Indian squad right from the beginning of his career.

Dilip’s sporting career took a new turn in 1998 when he was picked up in the Indian squad for the 1996 Olympics at Atlanta in the USA. Significantly, he was just 18 years and 8 months old when he made his Olympics debut. Moreover, he became the first sports person from Odisha to take part in the biggest sports extravaganza of the world.

Subsequently, Dilip led the Indian Men’s Hockey Team as Captain in the 2000 Sydney and 2004 Athens Olympics. He has also played three consecutive Hockey World Cups; Utrecht in Netherlands (1998), Kuala Lumpur in Malaysia (2002) and Monchengladbach in Germany (2006), apart from many international tournaments and matches.

Dilip Tirkey is not only the first from Odisha to participate in the Olympics, but the stylish ‘Wall of Indian Hockey’ was also the first Odia captain of the hockey senior national team. Besides, Dilip is the only Adivasi player in the country to have led the Indian hockey teams at three Olympics, an equal number of World Cups and ASIADs.

The Gold Medal in 1998 ASIAD, Gold in 2003 and 2007 Asia Cup Hockey tournament and Gold medal at the Afro-Asian games in Hyderabad in 2003 are the highlights of Dilip’s sporting career. Besides, he wore the cap of the Indian team which bagged silver medal in the 2002 Busan Asian Games.

A source of Inspiration for Many

Before announcing retirement from the world of sports as a player on May 2, 2010, Dilip represented India in 412 matches, a record number of international matches for any player in the world at that point of time. Though in subsequent period, Tuen di Nooijr of the Netherlands and Barry Middleton bettered the record, it remains a record for any Indian player till date.

Dillip has been bestowed with many awards and honours for his extraordinary contribution to the world of sports. In 1996, he was conferred the Eklavya Puraskar by IMFA. The Odisha government honoured him with the Biju Patnaik Sports Award in 2004. In 2002, the Wall of Indian Hockey was conferred one of the highest sports awards in the country, Arjuna Award, followed by one of the highest civilian awards, Padma Shri’ in 2004. For his outstanding contribution to sports, Dilip received the Odisha Living Legend award in 2011.

After his flourishing innings in the sports arena, Dilip received some degree of success in politics too. He was a Member of Parliament (Rajya Sabha) from 2012 to 2018. During his stint in the Upper House, hockey made great strides in Odisha. The growth story culminated in the hosting of the Men’s World Cup in 2018 and again in 2023.

Nevertheless, Dilip ushered in a new chapter in the history of hockey in India when he became the first player to be nominated as the president of Hockey India (of Indian Hockey Federation). Along with the top national assignment, Dilip is also shouldering the responsibility of the Odisha Hockey Promotion Council and Hockey Association of Odisha in the capacity of the President of both hockey bodies.