After a disastrous entrepreneurial debut in the early 1990s, Samarendra Mishra didn’t lose his heart and, along with his younger brother Soumendra, went on to build a business empire in the next two decades which now stretches across seas.

Back home in India, their dream venture, Ovo Farm Private Limited, remains unrivalled for more than a decade and going stronger with every passing day. With a daily output of one million eggs, Ovo Farm is the biggest producer of eggs in Eastern India and one of the major players in India’s colossal egg industry which is the third largest in the world.

Nevertheless, it takes certain types of persons like the Mishra brothers to put everything at stake to dream big despite having no formal training or family initiation into business. Nothing came to them on, the proverbial, ‘silver platter’.

Growing up in Balangir, a small town in the remote tribal heartland of Odisha, their early life story would find echo in many middle-class households in the eastern Indian state where access to services and facilities remains a challenge even till date.

“We learnt the hard way. Nothing came to us easy,” said Soumenra with a chuckle while going down the memory lane.

“We all four brothers did our primary education from a neighbourhood school and later completed schooling from a government high school in Balangir,” he said. 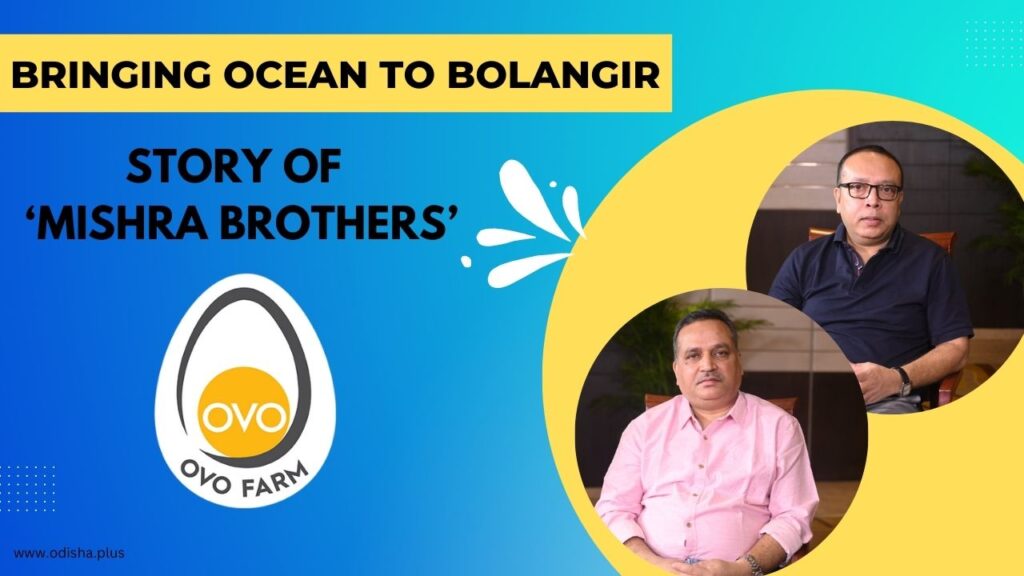 Samarendra said everything went on smoothly till his father decided to quit his legal profession and took a dive into politics. “My father was the most successful lawyer in town, and, thus, there was a steady flow of money for the upkeep of the household. After took a sabbatical from his profession, that flow stopped,” he said. It was at that point Samarendra decided to shoulder the family’s responsibility as his elder brother had just joined the bar (as a lawyer).

With a Bachelor of Arts degree in his bag, Samarendra headed for Bhubaneswar and joined MBA courses at an institute in the state capital to find a career which could help him support his family. “Soon I realised it wasn’t my cup of tea,” he said of his decision to quit studies.

In the next few months Samarendra wondered around industrial areas in and around Bhubaneswar to learn the ropes of business and find something suitable to follow. But nothing came on the way.

Back home in Balangir, Soumendra moved to Delhi after completing BCom and ended up doing a Sales Management programme at the NIS which later helped him bag a marketing assignment for Colgate Palmolive in western UP. He also briefly sold credit cards for a multi-national bank. “Both the jobs taught me immensely and gave me deep insight into business which came handy in managing bigger things ahead,” said Soumendra.

Meanwhile, Samarendra came back to his hometown (in 1995) and decided to try his luck in animal husbandry business for which he had an inclination since childhood. “I wanted to do something on my own to support myself and my family.”

However, it wasn’t easy as the required finances were few and far between. “My only support was my mother. She gave me Rs 1 lakh from her savings which was my first seed capital,” Samarendra remembered saying that he used the money to buy goats for rearing. “That business was a disaster,” he said.

The experience in the first venture made Samarendra look out for some stable and durable alternative and Poultry Farming came on the way. But this time, he decided to do proper homework before foraying into the new territory.

To reinforce his domain knowledge, he held deliberations with consultants in Bhubaneswar and Balangir before setting up his first firm in his home town with 300 birds. “I started getting 200 eggs per day to make it break-even,’ he said.

The results gave Samarendra the much needed confidence and he decided to scale up the business and make it commercially viable. He spent the next few months in making field trips to large poultry farms in Godavari district of Andhra Pradesh, considered to be the hub of poultry farming in the country. The experience made him wiser as he soon felt that setting up big farms required huge investment which he could ill afford. “I decided to go slowly but surely by learning from the operation of small firms,” he said.

After many co-lateral seeking nationalized banks slammed their doors on Samarendra, a co-operative bank finally agreed to sanction a loan of Rs 12 lakh with higher interest rates.

“It was then I launched my first organized commercial farm for the first time,” he said.

In the meantime, he persuaded Soumendra who was on a holiday to his home town, to join hands. “After some quick thinking, I decided to take the plunge,” said Soumendra. “That is how Ovo Farm was born.” 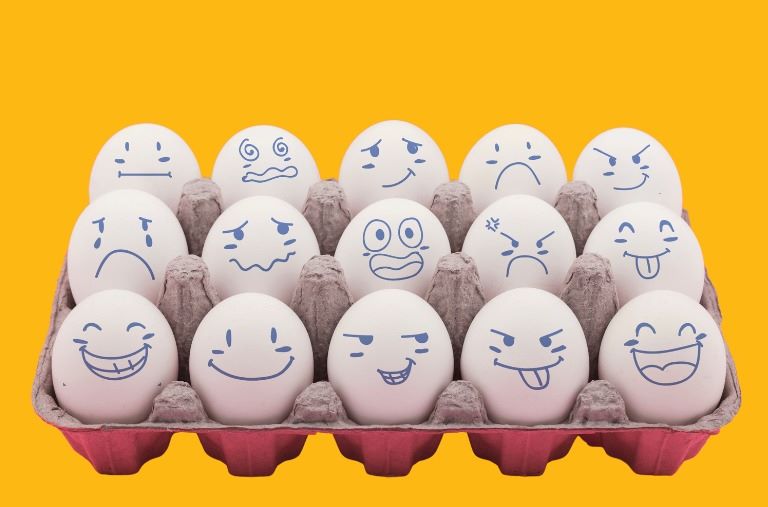 In subsequent times, while Samarendra was busy in streamlining the day-to-day operations of the new venture, Soumerdra, using his marketing skills, took over the marketing and diversification aspect.

“After a while, it came to us that we have to learn new things in order to break the threshold to build a world class farm, on par with those in Europe or America,” said Soumendra. And he needed more qualification and exposure to understand the nuances of cutting edge technology needed for such business.

With able support from his elder brother, Soumendra joined MBA courses at Bradford in England where he incidentally met his life partner, Linh who is from Vietnam.

“While in UK, I went to Turkey to see the operation of automated climate controlled poultry farms. In fact, we sealed a deal with one of them,” he remembered.

Accordingly, the required machineries were shipped to Balangir from Turkey. However, problem arose in the installation which the brothers never thought of. “The equipments were of no use in the absence of skilled persons to install and run them. We needed to build an entire eco-system in order to make things going,” said Samarendra.

Thereafter, technicians were flown in who trained the staff in installing the set up. However, days after installation, an operational error resulted in a catastrophic accident which caused the death of over 35,000 birds, thus throwing a new challenge in the ambitious expansion bid.

“Many suggested me to go back to the traditional way. But I took it on my stride and treated it as an experience,” said Samarendra.

Undeterred, the brothers sent some of the staff to Turkey for further training and bounced back with new vigour. “I can say with pride that we went on to build a team which is on par with anywhere in the world,” said Soumendra.

From there, the business went through a total transformation. And there was no looking back. 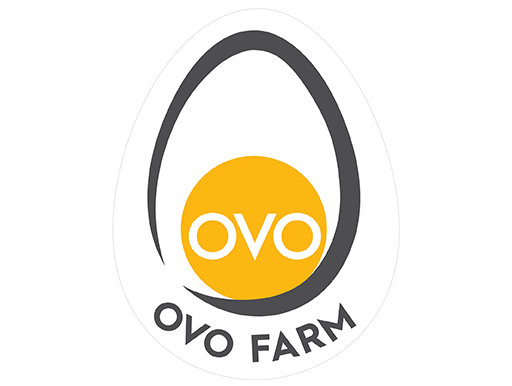 In the next few years, Ovo Farm not only became the most sophisticated egg processing unit in India, but emerged as the largest in the whole of Eastern India. “We have fully integrated (poultry) operation. We have our own feed plant for antibiotics residue free eggs. We have fully automatic climate control homes programmed by computers with minimum human intervention to avoid any contamination. We monitor the entire operation over our home-grown app,” said Soumendra adding that the farm has over half a million birds at present.

When the daily production breached the one million mark, the brothers started looking beyond the domestic market, and got the first overseas order from Muscat, Oman. “It was like bringing an ocean to Balangir,” he said with a smile. However, getting the foreign customer and exporting food item wasn’t an easy job. “One needs to build an entire ecosystem for that,” said Soumendra.

“We did our homework before stepping into the on-line buying-selling platforms and kept the required government certifications, and a variety of other compliances, ready,” said Samarendra.

With a stable overseas supply which has helped the company assert its position globally, the brothers are keen on breaking into another frontier by entering into markets in South-East and Far East Asia, notably Singapore and Japan, in the next five years. More than that, they are focusing on adopting block-chain technology to foray into B2C markets from the existing B2B. “We want to reach out to our customers directly,” said Soumerndra.

As has been seen often in the past, family-run enterprises run into feuds and misunderstanding among the partners as it grows. However, the Mishras have carefully handled things to rule out such possibilities. “Our works are not defined and codified. We work as a team. We don’t face any difference of opinion because no one takes decision independently. We discuss everything in details before arriving at a consensus,” said Samarendra.

“And if someone is not agreeing to something, others won’t pursue it,” Soumendra added quickly.

Otherwise, broadly the company responsibilities are divided among Samarendra, Soumendra and his wife for seamless operation. “While he (Samarendra) is the farmer (looking after the farm), I look after business. My wife runs the system,” Soumendra added.

The growth story of Ovo Farm runs alongside its philanthropy in the area. Soumerndra said at present, the company has adopted 50 poor families in Balangir and supporting them in every possible way. “It’s our duty to give it back to the place which has given us everything. We are planning to support more families in future,” he added. 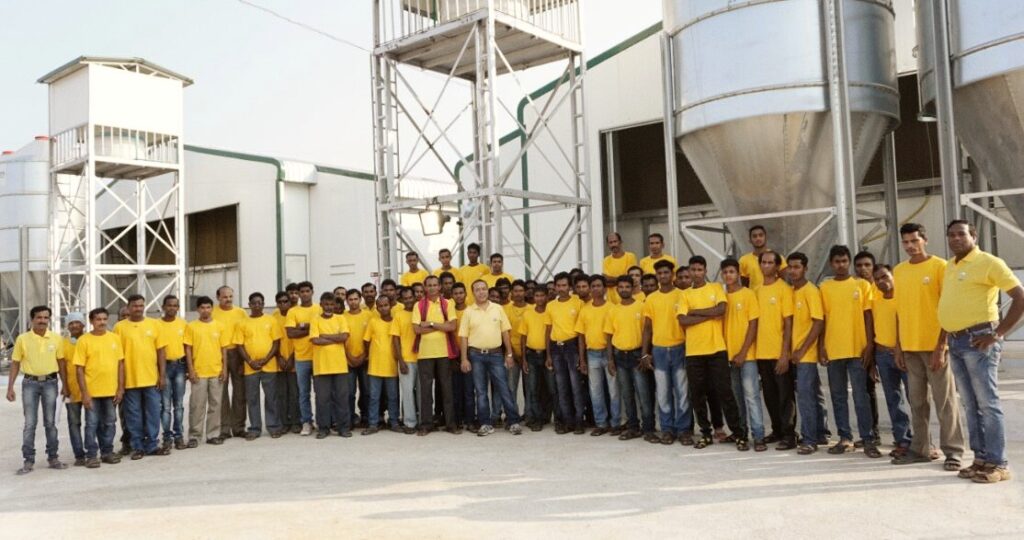 And the Mishra brothers wise words for future entrepreneurs wanting to venture into Agriculture, Animal Husbandry and allied sectors in Odisha?

“The first golden ruled is to be honest to your customers. Have confidence in your product and never compromise with quality. Customer confidence on the product will take you a long way. Secondly, while starting, don’t get noticed by the leader. First strengthen your roots. Time will come when they will notice you. By that time you’ll be able to take the challenges that eventually come to you,” said Samarendra.

Soumendra added, “Never get contended and look at the bigger picture. Then only you can scale up. Things have changed and the world is getting smaller. The tools are available. If you have the vision, you can reach there.”

The Mishra brothers have not only created a benchmark for themselves in the state and the country, but they have also set an example of entrepreneurship by defying many barriers, geography being the toughest of them all.