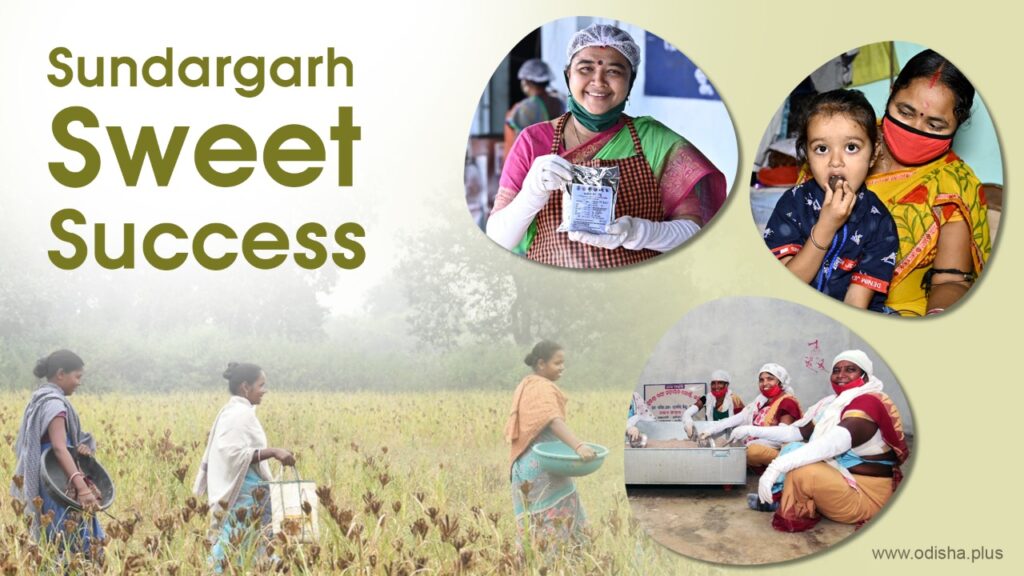 The Aayog, in its recent report titled ‘Take Home Ration – Good Practices Across the States/UTs’, has raised a toast to the initiative of including Ragi Laddu in Supplementary Nutrition Programme (SNP) for pre-school children under ICDS in Sundargarh.

Hailing it as a unique model in the country for its three-pronged gains of boosting the production of Ragi & other millet varieties, providing an assured price to the farmers and giving additional income to women SHGs, Niti Aayog has presented it among the best practices in the country under diversification of Take Home Ration (THR) products.

In his reaction to Niti Aayog’s report, the District Collector Sundargarh, Dr Parag Harshad Gavali said, “By supplementing nutrition through millets, we are building a strong foundation for the growth of children. This innovation has also helped in boosting income of farmers and women Self Help Groups (SHGs) in the district.”

Ragi Laddu to supplement nutrition of pre-school children was launched as a pilot programme in Sundargarh district on Aug 15, 2020. In a span of 12-months, this had become a universalized scheme covering all 21 ICDS project locations in 17 blocks and 4 ULBS.

This special initiative has been benefiting over 63 thousand children in the age group of 3-6 years in the district. At the same time, a total of 39 SHGs have been involved in the project of preparing the Ragi Laddu mix.

Moreover, against the initial provisioning of 2 laddus per children per week, the district has enhanced it to 4 laddus per child per week. The scheme ran without a hitch during COVID pandemic. Ragi Laddu Mix was then being delivered, through the Anganwadi Centres (AWCs), directly to beneficiaries at their home.

It is for addressing these twin objectives of malnutrition and livelihood generation that the Niti Aayog termed it a unique good practice in the country.

The Odisha Millets Mission Programme in the district is galloping at a good pace. With District Mineral Foundation’s (DMF) support, a five-year plan was chalked out that aimed at bringing over 3,000 hectares of farmland under millets cultivation in the district. But the area under millet coverage is all set to double to over 6000 hectares at the end of the five year plan (FY 2022-23).

The data documents the millet strides in the district. Despite no addition of blocks in 2019-20, the millet cultivation coverage has shown a rise of over 55 percent. Similarly, between 2020-21 and 2022-23, 8 more blocks have been brought under the millets mission programme, and the corresponding rise in area under cultivation zoomed by over 150 percent.

While for increasing acreage under millets, direct incentives are given to farmers, along with MSP and Govt Mandis has ensured swift procurement.

In a period of 2-years after its launch (2018), 2kg millet was supplied to beneficiaries via PDS. And between 2020-22, millet shakti kiosks started mushrooming in the district.

As of date, 21 Millet Shakti kiosks are functioning in the district, while one Millet Shakti Café is operational at Rourkela. Besides, 2 millet-on-wheels vans are at work in popularizing millets based cookies, bakes and snack varieties.