I was nervous. Out of the corner of my eye I looked at him. He wore a simple white pant and shirt. He was old, yet his face was glowing. There wasn’t any air of superiority about him. I was thinking, ‘Look at this person. He is a chairman, a well-respected man in our country and he is waiting for the sake of an ordinary employee.’ 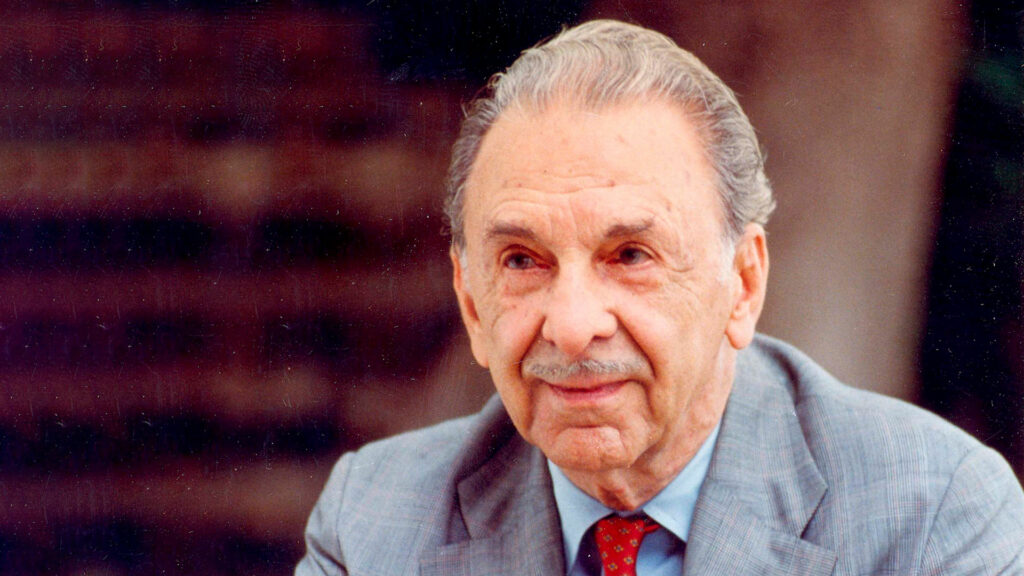 It was probably the April of 1974. Bangalore was getting warm and gulmohars were blooming at the IISc campus. I was the only girl in my postgraduate department and was staying at the ladies’ hostel. Other girls were pursuing research in different departments of Science.

I was looking forward to going abroad to complete a doctorate in computer science. I had been offered scholarships from Universities in the US. I had not thought of taking up a job in India.

One day, while on the way to my hostel from our lecture-hall complex, I saw an advertisement on the notice board. It was a standard job-requirement notice from the famous automobile company Telco (now Tata Motors)… It stated that the company required young, bright engineers, hardworking and with an excellent academic background, etc.

At the bottom was a small line: ‘Lady Candidates need not apply.’

I read it and was very upset. For the first time in my life, I was up against gender discrimination.

Though I was not keen on taking up the job, I saw it as a challenge. I had done extremely well in academics, better than most of my male peers…

Little did I know then that in real life academic excellence is not enough to be successful?

After reading the notice I went fuming to my room. I decided to inform the topmost person in Telco’s management about the injustice the company was perpetrating. I got a postcard and started to write, but there was a problem: I did not know who headed Telco

I thought it must be one of the Tatas. I knew JRD Tata was the head of the Tata Group; I had seen his pictures in newspapers (actually, Sumant Moolgaokar was the company’s chairman then) I took the card, addressed it to JRD and started writing. To this day I remember clearly what I wrote.

‘The great Tatas have always been pioneers. They are the people who started the basic infrastructure industries in India, such as iron and steel, chemicals, textiles and locomotives they have cared for higher education in India since 1900 and they were responsible for the establishment of the Indian Institute of Science. Fortunately, I study there. But I am surprised how a company such as Telco is discriminating on the basis of gender.’

I posted the letter and forgot about it. Less than 10 days later, I received a telegram stating that I had to appear for an interview at Telco’s Pune facility at the company’s expense. I was taken aback by the telegram. My hostel mate told me I should use the opportunity to go to Pune free of cost and buy them the famous Pune saris for cheap! I collected Rs30 each from everyone who wanted a sari when I look back, I feel like laughing at the reasons for my going, but back then they seemed good enough to make the trip.

It was my first visit to Pune and I immediately fell in love with the city.

To this day it remains dear to me. I feel as much at home in Pune as I do in Hubli, my hometown. The place changed my life in so many ways. As directed, I went to Telco’s Pimpri office for the interview.

There were six people on the panel and I realized then that this was serious business. 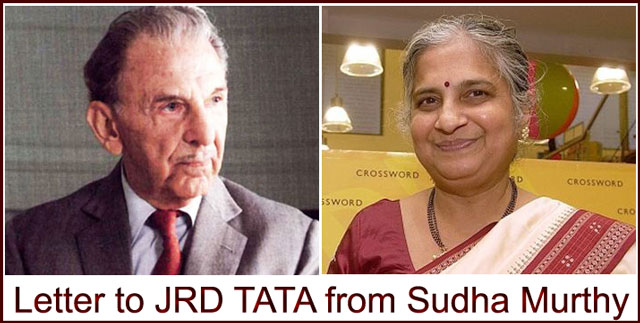 ‘This is the girl who wrote to JRD,’ I heard somebody whisper as soon as I entered the room. By then I knew for sure that I would not get the job. The realization abolished all fear from my mind, so I was rather cool while the interview was being conducted.

Even before the interview started, I reckoned the panel was biased, so I told them, rather impolitely, ‘I hope this is only a technical interview.’

They were taken aback by my rudeness, and even today I am ashamed about my attitude. The panel asked me technical questions and I answered all of them.

Then an elderly gentleman with an affectionate voice told me, ‘Do you know why we said lady candidates need not apply? The reason is that we have never employed any ladies on the shop floor. This is not a co-ed college; this is a factory. When it comes to academics, you are a first ranker throughout. We appreciate that, but people like you should work in research laboratories.

I was a young girl from small-town Hubli. My world had been a limited place.

I did not know the ways of large corporate houses and their difficulties, so I answered, ‘But you must start somewhere, otherwise no woman will ever be able to work in your factories.’

Finally, after a long interview, I was told I had been successful. So this was what the future had in store for me. Never had I thought I would take up a job in Pune. I met a shy young man from Karnataka there, we became good friends and we got married.

It was only after joining Telco that I realized who JRD was: the uncrowned king of Indian industry. Now I was scared, but I did not get to meet him till I was transferred to Bombay. One day I had to show some reports to Mr Moolgaokar, our chairman, who we all knew as SM. I was in his office on the first floor of Bombay House (the Tata headquarters) when, suddenly JRD walked in. That was the first time I saw ‘appro JRD’. Appro means ‘our’ in Gujarati. This was the affectionate term by which people at Bombay House called him.

I was feeling very nervous, remembering my postcard episode. SM introduced me nicely, ‘Jeh (that’s what his close associates called him), this young woman is an engineer and that too a postgraduate.

She is the first woman to work on the Telco shop floor.’ JRD looked at me. I was praying he would not ask me any questions about my interview (or the postcard that preceded it).

Thankfully, he didn’t. Instead, he remarked. ‘It is nice that girls are getting into engineering in our country. By the way, what is your name?’

‘When I joined Telco I was Sudha Kulkarni, Sir,’ I replied. ‘Now I am Sudha Murthy.’ He smiled and kindly smile and started a discussion with SM. As for me, I almost ran out of the room.

After that I used to see JRD on and off. He was the Tata Group chairman and I was merely an engineer. There was nothing that we had in common. I was in awe of him.

One day I was waiting for Murthy, my husband, to pick me up after office hours. To my surprise I saw JRD standing next to me. I did not know how to react. Yet again I started worrying about that postcard. Looking back, I realize JRD had forgotten about it. It must have been a small incident for him, but not so for me.

‘Young lady, why are you here?’ he asked. ‘Office time is over.’ I said, ‘Sir, I’m waiting for my husband to come and pick me up.’ JRD said, ‘It is getting dark and there’s no one in the corridor.

I’ll wait with you till your husband comes.’

I was quite used to waiting for Murthy, but having JRD waiting alongside made me extremely uncomfortable.

I was nervous. Out of the corner of my eye I looked at him. He wore a simple white pant and shirt. He was old, yet his face was glowing. There wasn’t any air of superiority about him. I was thinking, ‘Look at this person. He is a chairman, a well-respected man in our country and he is waiting for the sake of an ordinary employee.’

Then I saw Murthy and I rushed out. JRD called and said, ‘Young lady, tell your husband never to make his wife wait again.’ In 1982 I had to resign from my job at Telco. I was reluctant to go, but I really did not have a choice. I was coming down the steps of Bombay House after wrapping up my final settlement when I saw JRD coming up. He was absorbed in thought. I wanted to say goodbye to him, so I stopped. He saw me and paused.

Gently, he said, ‘So what are you doing, Mrs. Kulkarni?’ (That was the way he always addressed me..) ‘Sir, I am leaving Telco.’

‘Where are you going?’ he asked. ‘Pune, Sir. My husband is starting a company called Infosys and I’m shifting to Pune.’

‘Oh! And what will you do when you are successful.’

‘Sir, I don’t know whether we will be successful.’ ‘Never start with diffidence,’ he advised me ‘Always start with confidence. When you are successful you must give back to society. Society gives us so much; we must reciprocate. Wish you all the best.’

Then JRD continued walking up the stairs. I stood there for what seemed like a millennium. That was the last time I saw him alive.

Many years later I met Ratan Tata in the same Bombay House, occupying the chair JRD once did. I told him of my many sweet memories of working with Telco. Later, he wrote to me, ‘It was nice hearing about Jeh from you.
The sad part is that he’s not alive to see you today.’ 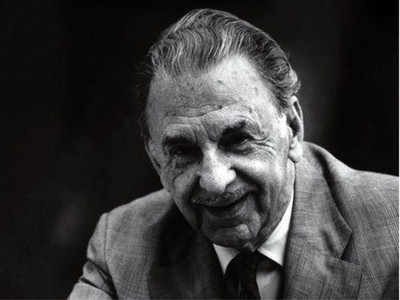 I consider JRD a great man because, despite being an extremely busy person, he valued one postcard written by a young girl seeking justice. He must have received thousands of letters everyday. He could have thrown mine away, but he didn’t do that. He respected the intentions of that unknown girl, who had neither influence nor money, and gave her an opportunity in his company. He did not merely give her a job; he changed her life and mindset forever.

Close to 50 per cent of the students in today’s engineering colleges are girls. And there are women on the shop floor in many industry segments. I see these changes and I think of JRD. If at all time stops and asks me what I want from life, I would say I wish JRD were alive today to see how the company we started has grown. He would have enjoyed it wholeheartedly.

My love and respect for the House of Tata remains undiminished by the passage of time. I always looked up to JRD. I saw him as a role model for his simplicity, his generosity, his kindness and the care he took of his employees. Those blue eyes always reminded me of the sky; they had the same vastness and magnificence.

(Sudha Murthy is a widely published writer and chairperson of the Infosys Foundation involved in a number of social development initiatives. The article was sourced from ‘Lasting Legacies’ (Tata Review- Special Commemorative Issue 2004). ‘Lasting Legacies’ was brought out by the house of Tatas on July 29, 2004 to commemorate the 100th birth anniversary of JRD Tata.)

OdishaPlus helps you make sense of the news. We provide context, analysis and multiple perspectives on politics, b