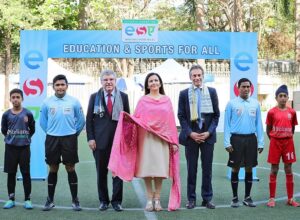 International Olympic Committee (IOC) member Nita Ambani has described the decision to award India the right to host the IOC Session in Mumbai in 2023 as “a significant development for India’s Olympic aspirations and a matter of great pride and joy”.

The decision confirms India will be hosting this prestigious meeting for the first time since 1983, in what is set to be the start of a new era of engagement between India’s youthful population and the Olympic Movement. Nita Ambani also reaffirmed her long standing commitment towards enabling the country hosts the Youth Olympic Games and the Olympic Games in the future.

An IOC session is comprising 101 voting members and 45 honorary members. It discusses and decides on the key activities of the global Olympics movement including adoption or amendment of the Olympic Charter, election of IOC members and office bearers and election of the host city of Olympics.

“Sport has always been a beacon of hope and inspiration for millions around the world. We are one of the youngest countries today and I’m excited for the youth of India to embrace and experience first-hand the magic of the Olympics. It is our dream to strengthen this partnership further and host the Olympic Games in India in the years to come!” said Nita Ambani.

Speaking at the successful conclusion of the bidding process, IOA President Dr Narinder Batra said, “I thank Nita Ambani for her vision and leadership and also thank all my IOC Member colleagues for their support, I cannot wait to see you here in Mumbai next year. This is the start of a new era for India sport – an era that features the long-term goal of hosting the Olympic Games in India. We are ambitious and recognise our objectives are bold. But India is on an exciting journey and we want the Olympic Movement to play a central part in building a brighter future for our next generation. Delivering a truly memorable Session in Mumbai in 2023, with a strong emphasis on youth potential, sustainability, and innovation, will be one of the first steps to showcase India’s new sporting capacity.”

The Session, to be held in the summer of 2023, will be hosted at Jio World Convention Centre in the heart of Mumbai City at the Bandra Kurla Complex.