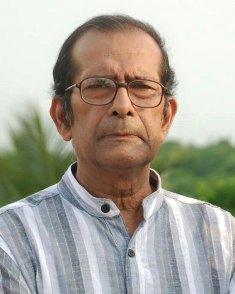 A portrait of eminent writer and academic Prof Ganeswar Mishra was unveiled at Shree Ram Chandra Bhawan in Cuttack on Sunday, making it the latest addition to a galaxy of litterateurs and legends of Odisha whose pictures don the walls of the historic building.

In his address, Nayak dwelled upon the concept of ‘placelessness’ gaining precedence over ‘rootedness’ in modern life. “Mishra’s writings were opposed to ‘placelessness’ and he always wrote about people and places with whom he related intimately,” he pointed out. “Mishra was a Professor of English Literature but devoted to writing in Odia.

He belonged to a rare breed of bilingual intellectuals who travelled, pursued research and taught in different parts of the world, but were committed to their land, their language and their people. He used to advocate that instead of chasing the world, we should strive and create our own distinct identity and space so that the world would come to us,” he added.

Biswaranjan said he had the ability to express himself and resolve complex issues in the simplest fashion. “He wrote about his own native place Puri and about people and subjects which were around him because he believed that writing from one’s own experience and surroundings was most important,” he noted.

Mishra, who died in August 2015 at the age of 73, wrote and edited around 100 books, including six novels, six short story collections and five travelogues. He served as Professor of English at Utkal University, president of Odisha Sahitya Academy (2005-2007) and founder-editor of leading Odia daily Prameya.