Good governance demands respect for human rights, rule of law, strengthening of democracy, promoting transparency and capacity in public administration. The responsiveness of the state and its institutions to the needs and aspirations of the people, and inclusive citizenship are imperative to good governance. Democracy depends upon the equality of all human beings, their right to participate in social and political transformation and the right to development, to live in dignity. 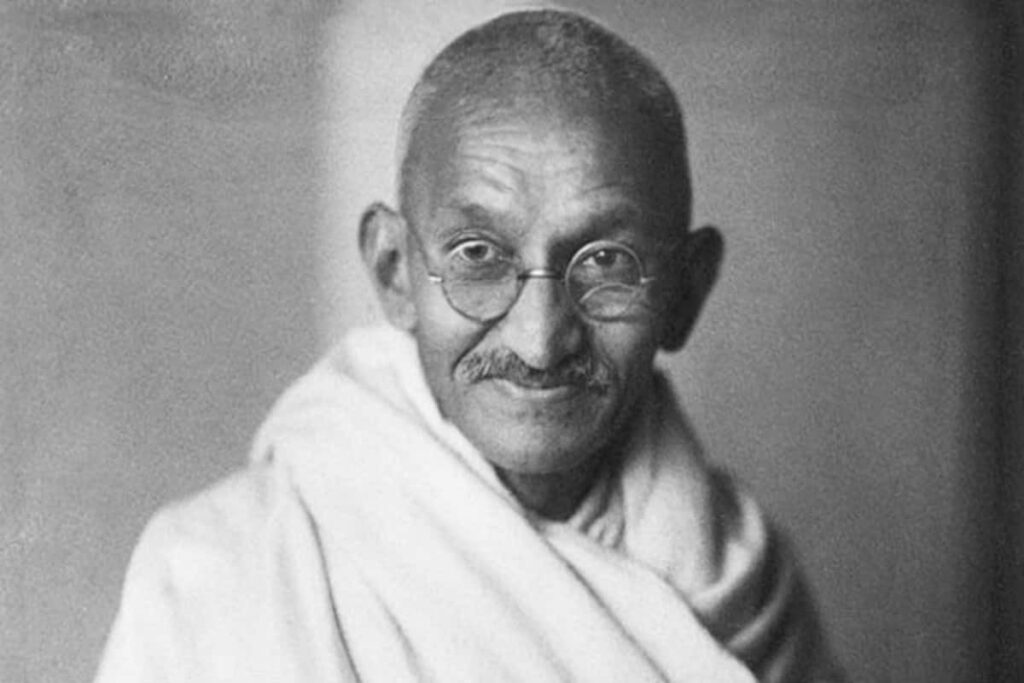 Panchayat Raj is a system and process of good governance. Villages have always been the basic units of administration in India since ancient times. The Gram Sabha can become the cornerstone of the whole Panchayat Raj institutional set-up, thereby the Indian democratic system. So in this paper focus is on Gandhian concept of Panchayat Raj. This is useful to development of India. So in 21st century this concept becomes powerful in India.

Gandhi’s concept of democratic decentralization bears the stamp of his passionate belief in non-violence, truth and individual freedom. He calls it Panchayati Raj or village Swaraj. He wants to see each village a little republic, self-sufficient in its vital wants, organically and non-hierarchically linked with the larger spatial bodies and enjoying the maximum freedom of deciding the affairs of the locality. Gandhi wanted political power to be distributed among the villages in India. Gandhi preferred the term ‘Swaraj’ to describe what he called true democracy. This democracy is based upon freedom. Individual freedom in Gandhi’s view, could be maintained only in autonomous, self-reliant communities that offer opportunities to the people for fullest participation.

The vehicle that was most ideal to initiate both political and economic democracy at the grassroots level was the Panchayat Raj system. Mahatma Gandhi’s tours all across the country reinforced his convictions that India would benefit if the villages were governed by Village Panchayats based on the principal of “simple living and high thinking”. These were village republics which were self-contained and self-reliant and having all that people want.

These were the institutions where minimum standard of living could be accorded to all human beings. An individual had maximum freedom and opportunity to develop his personality to the greatest extent. In these republics there would be a diminution of the state and the roots of democracy deepened. According to him centralization cannot be sustained as a system without adequate force. 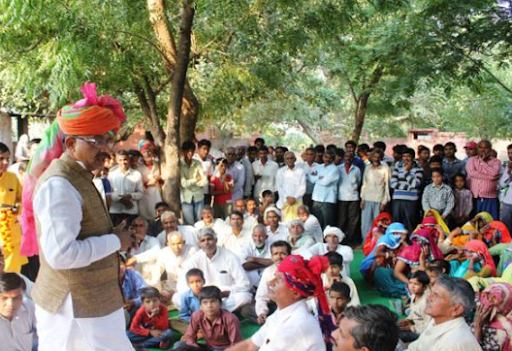 The affairs are to be managed by Panchayats consisting of five persons elected annually. Gandhi aimed at the individual the centre of the local administration. People are expected to take personal interest and turn up in large numbers at the meeting to deliberate problems of common interest such as village industries, agricultural production, obligation and planning.

Gandhi made it very dear that concentration of either economic or political power would violate all the essential principles of participatory democracy. To check centralization, Gandhi suggested the institution of village republics both as institutions of parallel polities and as units of economic autonomy. Village is the lowest unit of a decentralized system. Politically a village has to be small enough to permit everyone to participate directly in the decision-making process. It is the basic institution of participatory democracy. The technical skills of the villages will be fully developed, there will be no dearth of men with high degree of skill and artistic talent. There will be village poets, village artists, village architects, linguists and research workers. 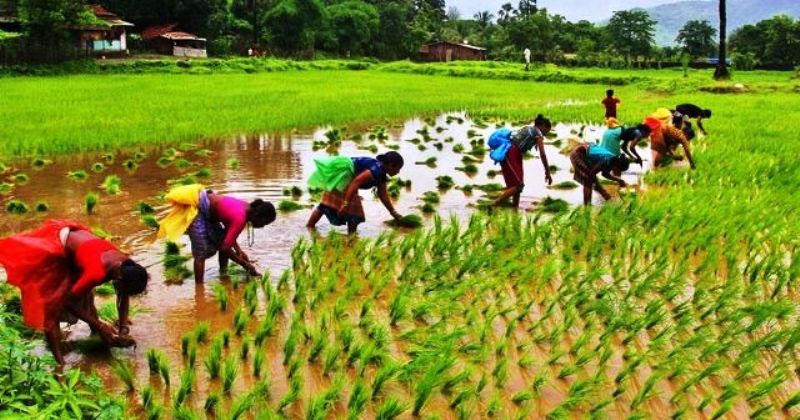 Gandhian decentralization means the creation of parallel politics in which people’s power is institutionalized to counter the centralizing and alienating forces of the modem state. According to Mahatma Gandhi, utilization of the local resources is quite fundamental to the development of the Panchayat Raj system. The Panchayats with the Gram Sabhas should be so organized as to identify the resources locally available for development in the agricultural and industrial sectors. Gandhi wrote, “Democracy becomes an impossible thing until power is shared by all, but let not democracy degenerate into mobocracy”.

Each village a little republic, self-sufficient, enjoying maximum freedom for deciding the affairs of the locality.6 Gandhi also proposed a scheme of government under the Gandhian Constitution beginning from the primary unit the Village Panchayat to the level of the All-India Panchayat, with the powers being assigned to all levels of the government. These villages should not only be self-sufficient but also capable of defending themselves, even if need be, against the whole world.

In his Presidential Address at the Belgaum Congress, Gandhi said that the Panchayat was not only a right medium for securing cheap justice but also an instrument for avoiding reliance on government for the settlement of mutual justice. The Gandhian ideas of Gram Swaraj and Panchayat Raj system can become vehicles for ushering in the much needed social and political change by including all the stakeholders in the process of decision-making and public policy formulation. As Gandhi said, “Panchayat Raj represents true democracy realized. We would regard the humblest and the lowest Indian as being equally the ruler of India with the tallest in the land”.

Mahatma Gandhi advocated Panchayat Raj, a decentralized form of Government where each village is responsible for its own affairs, as the foundation of India’s political system. The term for such a vision was Gram Swaraj (“village self-governance”). The Balwant Rai Mehta Committee was appointed by the Government of India in January 1957 to examine the working of the Community Development Programme (1952) and the National Extension Service (1953) and to suggest measures for their better working. The recommendations of the committee were approved by NDC in January 1958 and this set the stage for the launching of Panchayat Raj Institutions throughout the country. 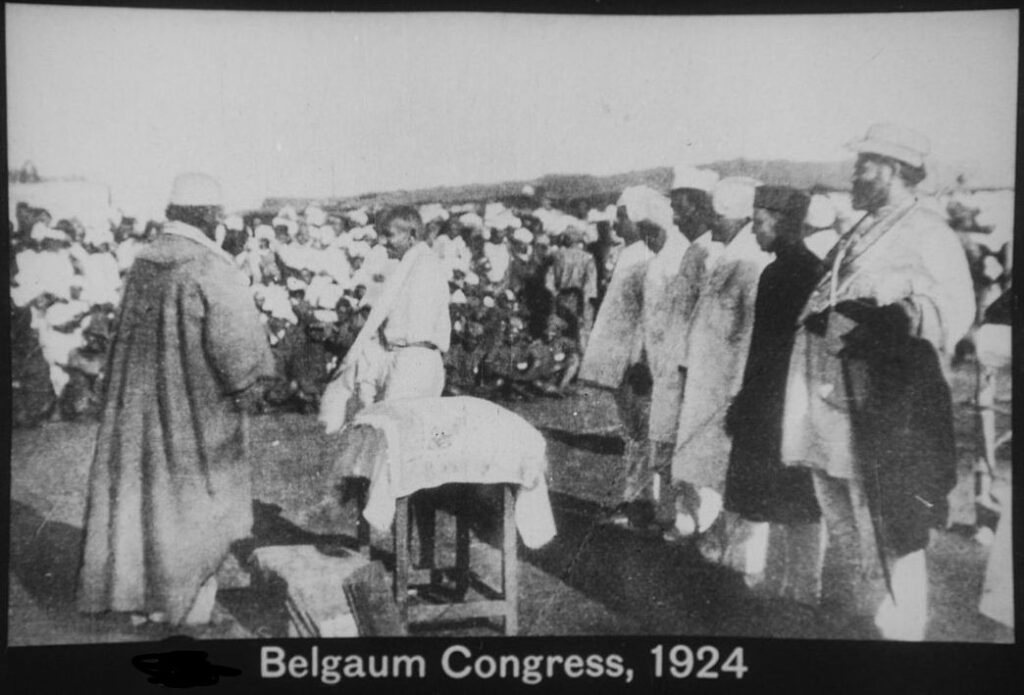 The committee recommended the establishment of the scheme of ‘democratic decentralization’ which finally came to be known as Panchayat Raj. (i) Establishment of a 3-tier Panchayat Raj system. This system was adopted by state governments during the 1950s and 60s, as laws were passed to establish panchayats in various states. It also found backing in the Indian Constitution, with the 73rd amendment in 1992 to accommodate the idea. The Amendment Act of 1992 contains provision for devolution of powers and responsibilities to the panchayats both for the preparation of economic development plans and social justice, as well as for implementation in relation to 29 subjects listed in the eleventh schedule of the constitution.

The Ministry of Panchayati Raj has issued specific guidelines to make Gram Sabha as a vibrant forum for promoting planned economic and social development of the villages in a transparent way. The guidelines are a part of the proceedings to observe the year 2009-10 as year of Gram Sabha and relates to the social audit for the effective implementation of Mahatma Gandhi NREGA.

According to the guidelines, the Gram Sabha as a Key to the self-governance and transparent and accountable functioning are a forum that ensures direct, participative democracy. It offers equal opportunity to all citizens including the poor, the women and the marginalized to discuss and criticize, approve or reject proposals of the Gram Panchayat and also assess its performance. Hence, the States may, by law, endow the Panchayats with such powers and authority as may be required to enable them to function as institutions of self-government under them, Article 243G read with the Eleventh Schedule stipulates that.

Such laws may also endow powers and responsibilities upon Panchayats for the preparation and implementation of plans for economic development and social justice including in relation to the 29 matters listed in the Eleventh Schedule. This did lead to the enactment of Gram Panchayat Acts by various States; these were no more than half-hearted attempts for the creation of rural local government institutions. But the failure of the Community Development Programme, which had been launched for bringing a silent revolution in rural society by awakening the dormant forces of progress, led to the appointment of Balwantrai Mehta Study Team.

But the studies of several distinguished scholars on the working of the Panchayat Raj in different States and the Status Report of the Ministry of Panchayat Raj (1996) lead us to the inference that the Gandhian ideal of Gram Swaraj remains an unfinished agenda even after six decades of the implementation of the Panchayat Raj on the recommendation of the Balwantrai Mehta Study Team on October 2, 1959. 73rd Amendment was implemented by various States in 1994. Therefore, concerted, systematic and sustained endeavours are needed on the part of those for whom Gram Swaraj remains a cherished dream for the empowerment of people and for making national development of India a participatory democracy.

(Writer is a New Delhi based Economist. Views are Personal.)