Gangster Vikas Dubey ‘Kanpur wala’ was killed in an encounter on Friday, 10 July 2020 after a police vehicle carrying him from Ujjain to Kanpur met with an accident and he tried to escape from the spot in Bhauti area, a senior police official said. After the accident, Dubey snatched the pistol of a Special Task Force personnel and tried to flee but was surrounded by the police team and he was injured in an exchange of fire. He was rushed to the hospital where he was declared dead.

Vikas Dubey, who was carrying a reward of Rs five lakh on information leading to his arrest, was apprehended from Ujjain in Madhya Pradesh on Thursday. Vikas Dubey from Bikru village in Kanpur had a long history of both criminal  and political activity. He and members of his family had been heading Bikru panchayat for the last 25 years. He was said to have joined and left several parties, to suit his political clout. Now almost all political parties are trying to disown him. 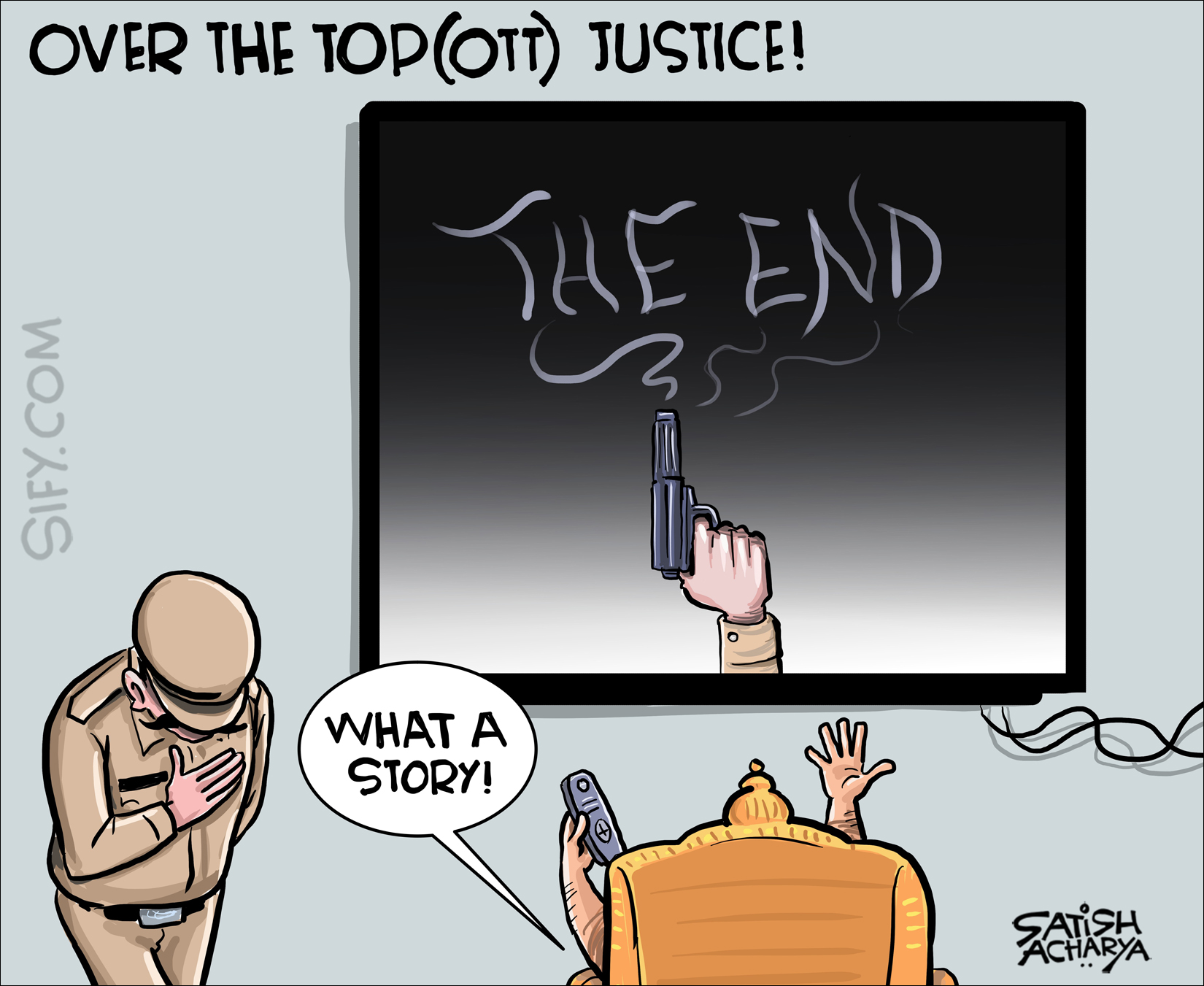 In modern print media, a cartoon is a piece of art, usually humorous in intent. This usage dates from 1843 when Punch magazine applied the term to satirical drawings in its pages, particularly sketches by John Leech. Cartoon as an art usually acts as a visual metaphor to illustrate a point of view on current social and/or political topics. Among the elements of cartoon are narrative and satire. Narrative makes the cartoon comprehensible to the reader. It provides the necessary context and perspective, without which the reader might miss the punch and thereby the fun. Satire is humour plus ridicule.

Without humour, satire degenerates into invective. Humour, thus is an integral part of satire. Irreverence is another important element of cartoon.  Cartoons by nature have to be irreverent. It cuts through the social hierarchy and brings down the high and mighty. That ‘levelling down’ creates a feeling of satisfaction and déjà vu among the readers/audience. This also is the primary reason of the ire of the high and mighty against the cartoon and the cartoonist. 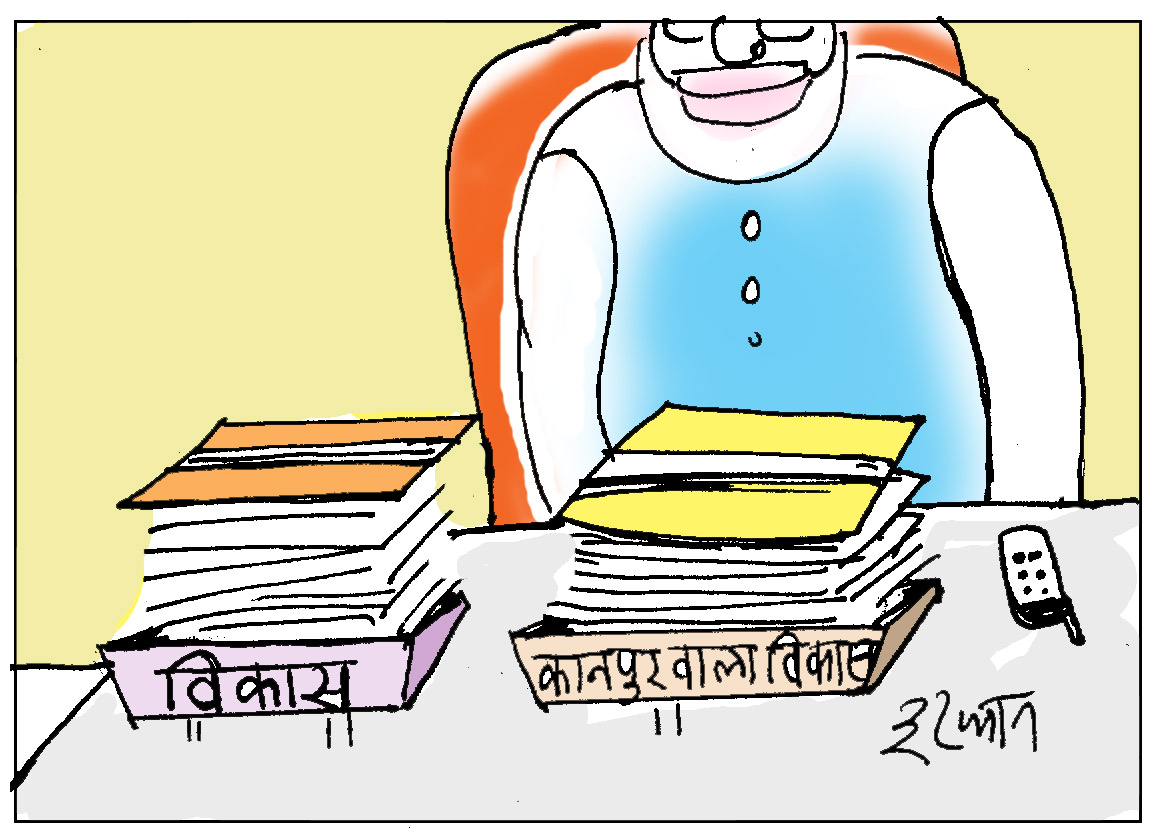 Here are some cartoons on Vikas Dubey incident by various cartoonists, published in various publications and web-sites. Note how the cartoonists are hinting at and criticizing criminal-politician nexus. Some cartoons play with the word ‘Vikas’, which means development in Hindi and several other Indian languages.

Some cartoons point out the ‘film-like’ way Vikas was killed and raised the question: was he ‘silenced’ to cover up ‘dirty secrets’? Note the sarcasm in some cartoons as the enraged cartoonists wonder: why people like Vikas Dubey was allowed to grow in the first place and then mowed down? 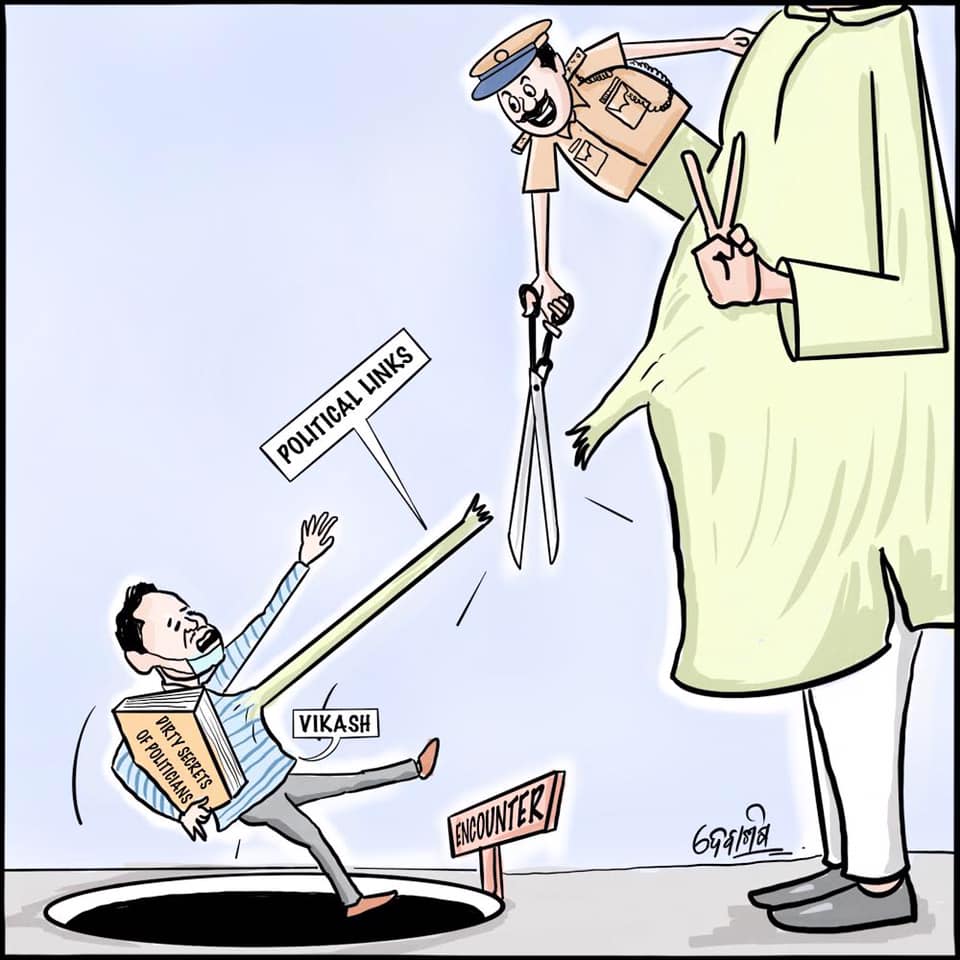 (Author is the Regional Director of IIMC, Dhenkanal. Views are Personal)