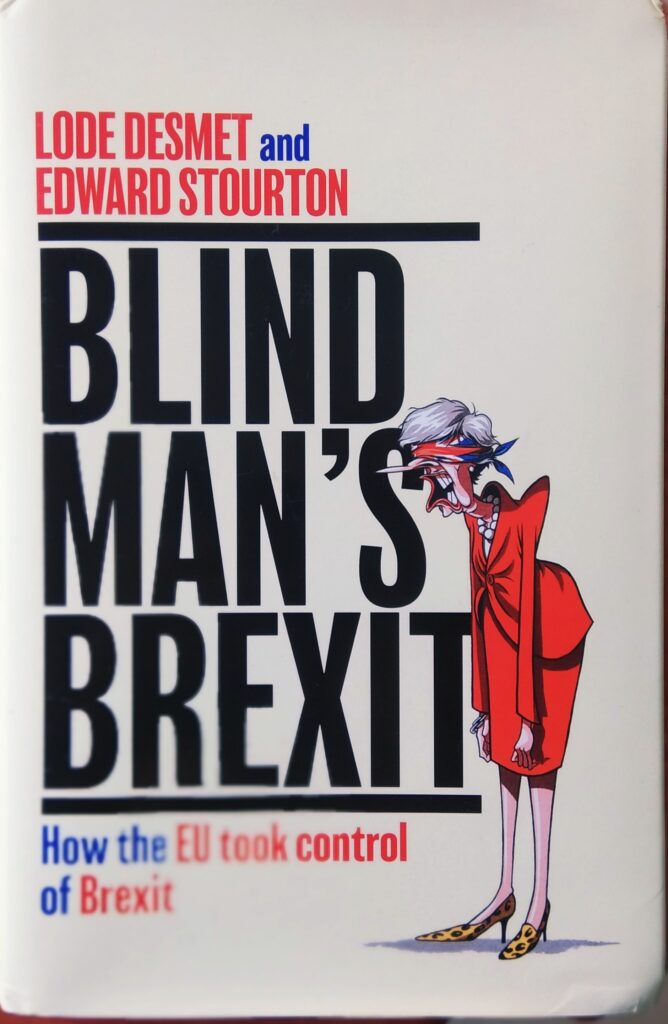 Three years down the lane, Britain is still battling over Brexit. British voters decided to exit, or Brexit, the European Union, ending a long marriage. Yet, the U.K. is still sleeping on the couch. The deadline to leave passed without resolution. If the divorce between Britain and the European Union started in June 2016, the finality doesn’t appear to be coming anytime soon. There is a certain British theatricality to Brexit — a mix of colorful characters, conflicts, threats, promises, but still, no clear exit strategy. That is what this book is all about.

A meticulously-researched book ‘Blind Man’s Brexit – How the EU Took Control of Brexit’ makes it clear that the blame for this would squarely lie on the bureaucracy and politicians for letting the negotiations slip out of Britain’s hands.

Written with distinguished political commentator Edward Stourton, who also provides a British perspective on events, Blind Man’s Brexit goes beyond the documentary to reveal a staggering and unprecedented failure of diplomacy on one side and contrasts the very clearly defined aims and goals of the EU side.

Many books have attempted to tell the story of what happened, but this one has completely unfiltered access to events as viewed by the EU, and shows exactly why, how and where the Brexit negotiations went so hugely wrong, resulting in the departure from the EU being delayed beyond 29 March 2019 as the UK was left in limbo and its political system in disarray. Documentary maker Lode Desmet and BBC broadcaster Edward Stourton provide perhaps the first in-depth fly-on-the-wall view of the fiasco.

The book candidly says that British diplomacy within the EU “has always thrived on these divisions, and during Britain’s four-and-a-half decades as a member state, its diplomats gained a grudging respect for their ability to put together coalitions that served Britain’s interests” and believed that this could be replicated during the Brexit talks.

‘But they fatally miscalculated the difference between being a malcontent member and a nation that is abandoning the club altogether… The common enemy of Brexit brought the EU together,” the book says. The 27 remaining States “agreed to a strategy and gave clear negotiating instructions to a skilled and experienced negotiator in the person of Michel Barnier. This time, it was the British who were undermined by political divisions at home,’ says the book.

The European team remained constantly curious about British political opinion. They sometimes misjudged the dynamics of the British position but paid “close and sophisticated heed to the way British politics was evolving. Their British counterparts, by contrast, were obsessively focused on and hamstrung by the domestic political debate.”

“Good diplomacy depends on empathy, an understanding of the forces driving your partners or opponents. Britain has been stubbornly tone-deaf of the mood music from the rest of Europe,” the authors maintain, adding: “The lessons here for Britain’s officials and politicians are painful, but they are also essential. Britain still has a long Brexit battle ahead.”

The book also details the “tactical mistakes” of Teresa May, who stepped into the Prime Minister’s shoes on the resignation of David Cameroon who called the referendum that saw a 52:48 vote on leaving the EU. “As soon as she triggered the Article 50 process, she handed a negotiating advantage to the European Union and she took this highly consequential step before securing a consensus about what the government wanted to achieve,” the book says.

Then, the new timetable of October 31 for Britain’s departure “was again driven by the EU’s requirements, not the United Kingdom’s,” it says. Boris Johnson initially tried to brazen it out, terming those questioning his ability to deal with Brexit as “doubters, doomsters, gloomsters” and insisting that in the 99 days from his assuming office on July 24, “we will have cracked it” (secured a deal), adding: “Never mind the backstop (a safety net that would prevent the re-introduction of a hard border between Ireland and Northern Ireland after Brexit), the buck stops here.”

Thereafter, the Supreme Court faulted Johnson for recommending to Queen Elizabeth that Parliament be suspended for five weeks to give him elbow room to hammer out a deal and now he himself talks of a last-ditch effort at securing a deal. What a turn-around it has been for Britain’s politicians and the bureaucracy in converting what could have been an amicable divorce into an extremely messy one!

Essential reading for anyone anxious to understand the background to the Brexit debate this book is a must. One gets to know what exactly was going on in the corridors of power in Brussels, and how the EU comprehensively outmaneuvered the UK government. The description conveys a nasty muddle, making clear what a terrible failure by almost every UK politician.