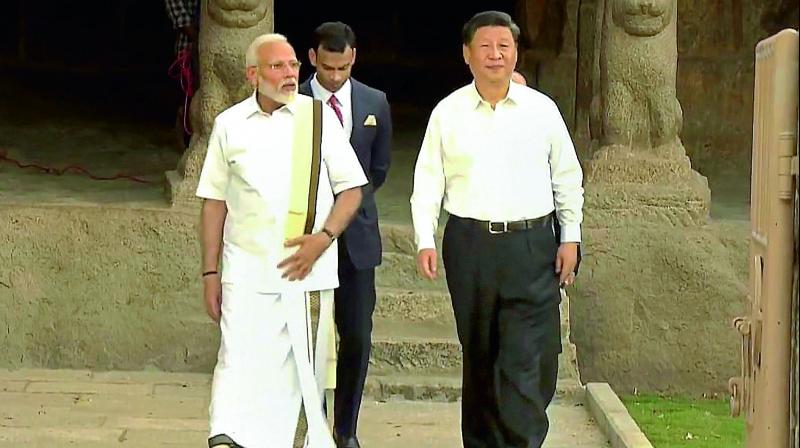 Keywords that were told after the two days long informal summit between Chinese Premier Xi Jinping and Indian PM Narendra Modi are the following: a new beginning for cooperation (Modi), manager their differences prudently (Modi), right decision to have such summits (Xi), deeper strategic communication and more effective practical cooperation ahead (Xi), work together in facing radicalization and terrorism (Foreign Secretary Vijay Gokhale), both to enhance trade volume and identify areas of investments (Gokhale), and new mechanism coming to discuss trade, investment and services ahead (Gokhale).

All in good spirit, though without any concrete firm decision. Lot of optics and rhetoric without great substance, though in the current scenario between India and China, such steps also are useful.

Optics were perfect. Mammalapuram heritage city. History of trade with ancient China is here. India PM in Tamil attire and Chinese Premier in Western attire are looking great too. Handshakes and smiles abound. Third direct meeting between the leaders after Sabarmati bank meet in Gujarat and Wuhan meet in China. Though both the leaders have ‘bumped’ into many recent occasions like Russia-China-India Forum, SCO meet, BRICS meet, G-20 meet et al, all among the ten meetings in last three years. Also these informal meets come after a series of foreign secretary level dialogues starting in 1988 and empowered special representatives’ meets from 2003.

So, all good. Still there was no great news. No major breakthrough was expected from an informal summit though, that too without an agenda and without either side confirming it even four days before the meet. However, it is important to make some concrete progress with every global engagement of this type. Let us explore what are the irritants between the two nations and where and what concrete progress they can do going ahead. 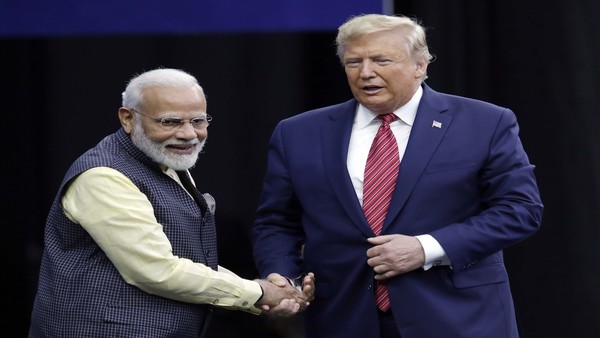 What are the irritants between India and China and where can some progress be made? Or will this one end with loads of optics and no concrete outcome on ground like the Howdy Modi meet of PM Modi and President Trump?

First, both have an asymmetric trade relations with a trade deficit of around USD 54 billion, and India has been raising this issue without any progress made till Wuhan informal meet. India is calling for a more level playing ground in export of its products and services without trade barriers, and asking for more investments by China in India, without much luck. Emerging US-China trade war makes India an attractive trading proposition for China, but merely imports of Chinese goods into Indian markets will only increase the trade deficit. China, with six times of India’s economy (USD 14 trillion against our USD 2.8 trillion), can afford to ignore us. But it is in India’s interest to steadily bring down the trade deficit from $54 billion a year to $10-12 billion a year in five years.

Second, India has an illusion of strategic parity with China which is highly misplaced. China is five times larger an economy and several times stronger and more organized an armed forces than India. It produces most of its arms and ammunition while India is the larger importer of global arms and ammunition. On the other hand, China hyphenates India and Pakistan in one go and undermines India’s economic, military, democratic, social, cultural, technological and educational superiority as a nation over Pakistan. This must end from both sides.

Third, taking the second point further, both nations must look at de-escalation of border skirmishes across the Himalayan range, especially in Arunachal Pradesh and Trans Karakoram range. They must create a high level mechanism and military confidence building measures for border management and avoid another Doklam type near-conflict situation. Doklam, though is in Bhutan which is an Indian protectorate, has today permanent structures built by the Chinese much to the chagrin of India.

Fourth, China and India celebrate 70th Anniversary of Diplomatic Relations, which were established by Maoist China in 1950 with Nehru’s India. And this can be a perfect opportunity for both the nations, which are also fastest growing economic-military-technological powers of the world and two very ancient and highly revered civilizations, to come closer. Track 2 people-to-people relations and cultural ties can take a leap this year through mutual visits, film fests, literature sharing, India Fest in China and Festival of China in India, academics-bureaucrats-entrepreneurs visiting each other, etc.

Fifth, the two rising Asian powers in a century often called the Asian century, must present some consensus and convergence of views and opinions before the world to be respected, say, on issues like Middle Eastern regional crisis, climate change and ecological degradation, preservation of ancient art and heritage, on tackling global terror, etc. China wanting to tie India to the sub-continent and India ignoring China in many world fora are not in the interests of either. 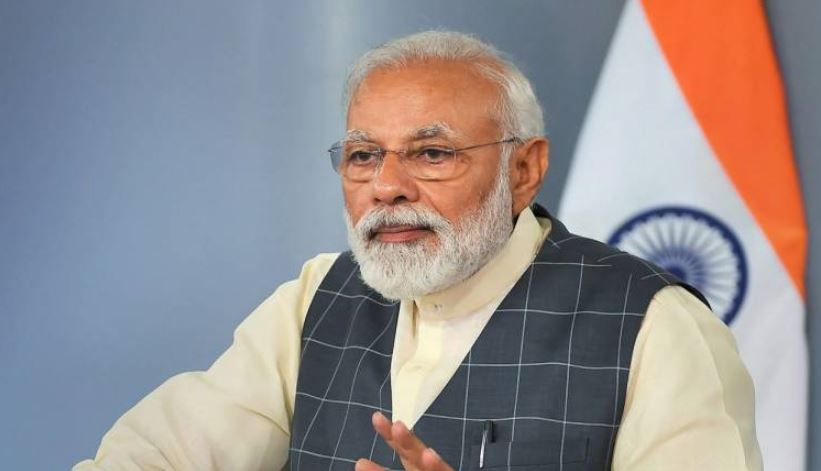 But where are we in reality?

Modi in 2014 polls campaign repeatedly talked about showing ‘Laal Aankhein’ (angry red eyes) to China if voted to power, but meekly withdrew in Doklam and does not mention Aksai Chin (though relook at Pakistan Occupied Kashmir is quite frequent these days). Modi has met Xi eleven times after coming to power, but there has not been one deal/agreement/treaty till date worth the name. Also, India’s caution on the China-front has led it to be careful in relations with the US and the West in the past. India in recent times has accepted Huawei’s 5G trials and rollout in India in spite of the allegations of the Chinese telecom major working on behalf of Chinese espionage.  India, as seen often, over-estimates its leverage with China in its triangular relations with US and China. 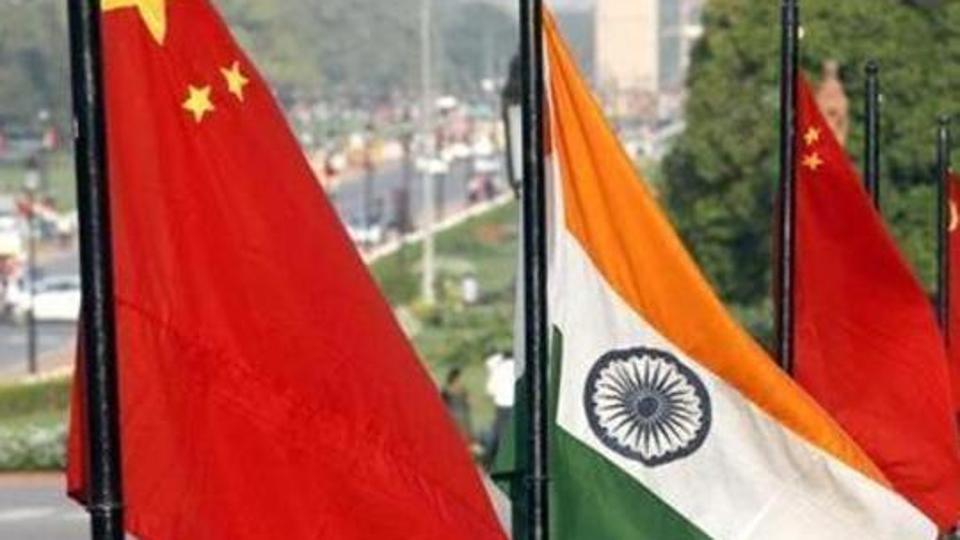 Xi is known to concentrate powers in his hands and has ensured himself virtually the top Chinese leadership till death. He is now keen in expansion of Chinese sphere of influence across South and Southeast Asia through Belt and Road initiative of creating high end infrastructure in the region expanding Chinese trade and military interests thus, which India opposes. He is facing a possible negative economic fallout of a looming trade war with US, and hence needs India more than ever before. As an emerging superpower next only to the US in economy, military and technology, China needs a friendly India for sure. But then all measures in the last six years by China vis-a-vis India, in spite of eleven meetings between the leaders, have been detrimental to the Indian interests, including China’s vocal support to Pakistan and attempt to take the latest Kashmir imbroglio to the UN Security Council. Xi asking for solution to the Kashmir problem in compliance with the UN resolution is not to India’s liking. Also, China has actively opposed India’s candidature as a permanent member of the UN Security Council and India’s entry into the Nuclear Suppliers’ Group.

Any major break-through with China is well neigh impossible. So, start small. Make the 70th Anniversary of Diplomatic Relations a major occasion for track 2 and cultural relations. Make small military confidence building measures on the borders. Allow Chinese investors come to India (many are interested and facing bureaucratic hurdles). Ensure their ease of business. Promote each other’s culture, heritage, art, philosophy, cuisine and cinema. Try increasing Indian exports to China. Explore if Chinese support can be taken in building high-end public infrastructure in India. Let trouble spots like Kashmir or South China Sea etc be out of discussions for the moment. Build consensus on common challenges before the world. Present a strong face of Asia in the global context.

Let the hype and hoopla of the form not over-shadow the substance of relationship between India and China in uncertain times.

The author is a columnist and political analyst on television and is currently the Pro Vice Chancellor of Kolkata based Adamas University, and the former Dean of Symbiosis and Amity Universities, Pearl Academy and Whistling Woods International. 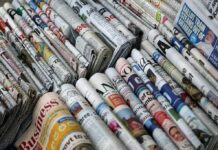