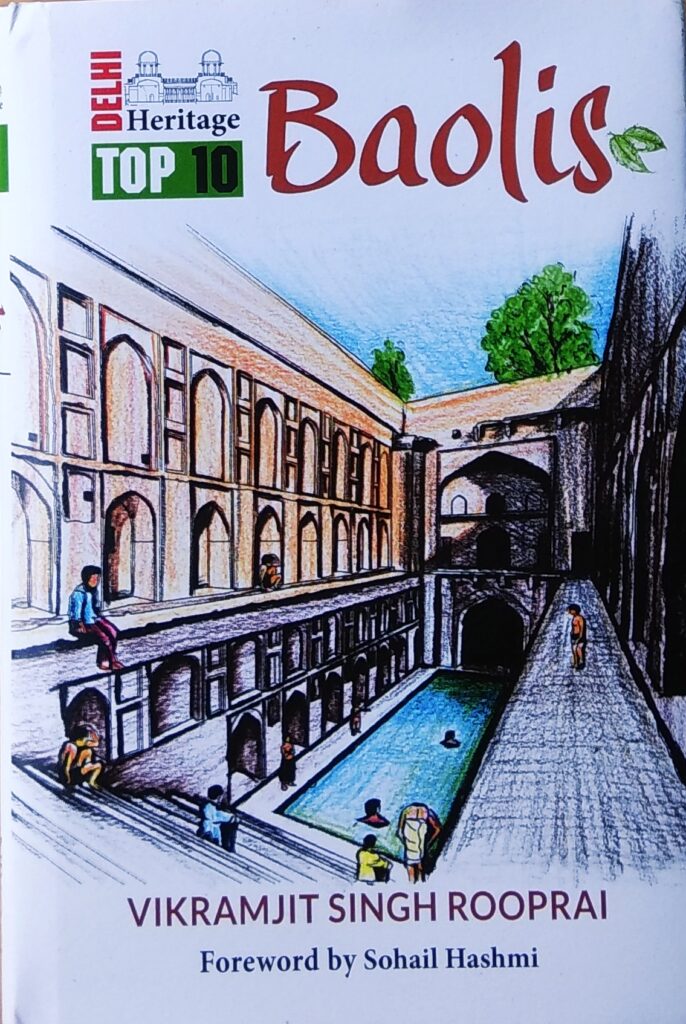 Celebrating Delhi’s architectural legacy is catching up lately and with a sort of vengeance! If apps are being launched for making old and forgotten stories about the city more accessible, books are being popped up on the cultural landmarks of the national capital. Swapna Liddle has done a couple of books recently. Here is one more by heritage activist and educator Vikramjit Singh Rooprai.

Known for his intensive research on Delhi’s heritage and having established  ‘The Heritage Photography Club’, Vikramjit is into a couple of other things too – promoting heritage through poetry, theatre, photography, games, lectures and setting up Heritage Labs in schools and colleges.

Under the series ‘Forgotten and Hidden Architectural Gems in the City’, Niyogi Book’s ‘Baolis’ is a magnificent addition to Delhi’s Top 10 heritage places. The first volume of the series is a must-read for travel enthusiasts and those with a paramount interest in architectural and historical structures.

Baolis or step wells built over the last one thousand years in Delhi are fascinating structures that were not only useful but also commendable for their finest engineering and design. Baolis are unique to India and mostly seen in states of Gujarat, Rajasthan, and Delhi.

Baolis – also called bavri’s, and vavs in different parts of India – were basically public spaces where the community could assemble, out of the sun in the hot summer  that blistered the western and northern tracts of India for nine months in the year. These monumental treasures were, sadly and willfully, allowed to egress from being what they were. When the British took the reins and ruled India, this excellent traditional water conservation system was thoughtlessly destroyed.

With a foreword by Prof Sohail Hashmi, the tiny hardback delves into the fascinating history of the step wells and their significance. The book contains short, interesting anecdotes to grab readers’ interest. What is interesting about the volume is it contains historic as well as modern photographs along with architectural drawings from ASI to enable the person who reads it to have a better understanding of the structures and the present condition of the baolis. The book is neat, revealing, and useful for visitors looking at exploring these hidden architectural treasures in the city of Delhi. Details of locations, distance, and commute have also been provided for each of the baolis.

It is believed that once Delhi had 100 baolies but presently there aren’t more than 10. The remaining baolis are either defunct or unrecognizable. Blissfully, the baolies of Delhi which once revolved around the life of Delhites in the bygone era have come to limelight with this book.

The book deals with the top ten baolis, with two special mentions at the end. Besides giving a vivid description of the functioning and revival of the baolis, it also focuses on the social importance of each structure. The work is an outcome of three-year-long research from various archives and contains historic as well as modern photographs along with architectural drawings.

This 175-page book with numerous factoids about the step-wells is elegant and at the same time educative.