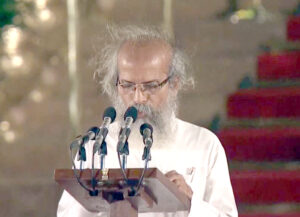 When he was invited to the oath taking ceremony at the forecourt of Rashtrapati Bhavan on Thursday, many in Odisha were elated . There were reasons for such jubilation. The man who had renounced the humdrum of daily life at an early age and was lured to the Ramakrishna Math at Belur has been  appointed as Minister of State in Narendra Modi’s government .

Pratap Chandra Sarangi the newly elected MP from Balasore was of course a foregone choice because he,like Prime Minister Narendra Modi, is a bachelor and has an impeccable political career. In fact, Pratap Sarangi has always been a Modi favorite; and whenever the PM visited Odisha he had some praise for this soul  who has dedicated all his life to social service. 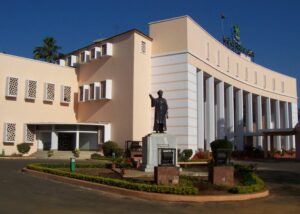 Sarangi has been leading an austere life and simplicity is his hallmark. He was elected to the Odisha Assembly twice from Nilagiri .In 2014, he fought the Lok Sabha elections but not with success. This year’s general election has catapulted him to Parliament and is now a minister of state.

Pratap Sarangi was born in Gopinathpur village  into a poor family.He did his graduation from Fakir Mohan College,Balasore.But he was attracted to an abstinent way of life since childhood. A great devotee of Ramakrishna Paramhans,Sarangi is believed to have decided to become a ‘santh’ ,but the Ashramites at Ramakrishna Mission sent him back to take care if his ailing mother. Once back in the village he took to social service. One of his big accomplishments had been the schools he built for tribal children in Balasore and Mayurbhanj districts.

Pratap Sarangi is one of those rare breed of BJP politicians who have upheld political values.

Pratap has been an example for those who believe in minimalism and straightforwardness. Even as he has been a front-line leader in the Odisha BJP and had been MLA twice,he hasn’t changed his lifestyle. To this day,the only material possession he has is a bicycle and a thatched house in his ancestral village.

Pratap Sarangi’s sartorial appearance has been a talking point in the social media after he was elected an MP. His way of life, the daily chores and his campaigning on an auto-rickshaw all have  been  points  of awe and surprise.

What is significant is that he defeated two powerful and rich candidates this time  who were  in the fray. Prime Minister Narendra Modi had campaigned for Pratap Sarangi and that was  his final leg  campaigning in Odisha. 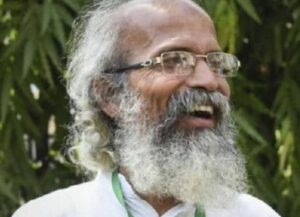 Often called the ‘saint of politics and ‘Odisha’s Modi’, Pratap was tipped to become the state president in 2008 of the Odisha BJP.But his bluntness and his perceptive manners didn’t appeal to the state leadership. An effective orator, he was however  made a vice-president of the party as a solace.

Pratap Sarangi is one of those rare breed of BJP politicians who have upheld political values.