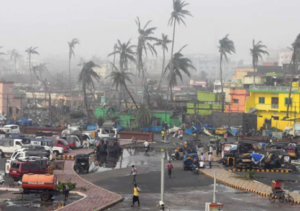 Cyclone ‘Fani’ has been extensively covered by the foreign media. Whether it is the forewarning or the aftermath of the tropical storm, some of the leading newspaper of the United States did stories detailing the onset of the hurricane and the widespread damage.

The Washington Post in its headline ‘Monster Cyclone Fani roars ashore eastern India ’ reported the calamity somewhat  this way: ‘cyclone Fani, equivalent to a Category 4 hurricane, plowed into eastern India Friday morning local time, unleashing destructive winds, storm surge flooding, and torrential rain. It was the strongest storm to strike the country since 2014.The storm, packing winds of over 130 mph, made landfall in Puri, a coastal city of 200,000 in the state of Odisha. Social media video showed violent winds blasting sheets of rain sideways and its streets littered in debris.’

The May 3rd story filed by Jason Samenow  – Washington Post’s weather editor and Capital Weather Gang’s chief meteorologist – wrote in his report,’ Many of the deadliest cyclones ever recorded have struck coasts along the Bay of Bengal in densely populated, low-lying zones vulnerable to storm surge that have flimsy infrastructure and — in many instances — suffer from a lack of early storm warnings and evacuation efforts.’

A New York Times story captioned ‘How Do You Save a Million People from a Cyclone –  Ask a Poor State in India’  wrote: ‘one of the biggest storms in years was bearing down on Odisha, one of India’s poorest states, where millions of people live cheek by jowl in a low-lying coastal area in mud-and-stick shacks. But government authorities, along India’s eastern flank, hardly stood still. To warn people of what was coming, they deployed everything they had: 2.6 million text messages, 43,000 volunteers, nearly 1,000 emergency workers, television commercials, coastal sirens, buses, police officers, and public address systems blaring the same message on a loop, in local language, in very clear terms – A cyclone is coming. Get to the shelters.’

The report by Hari Kumar, Jeffrey Gettleman and Sameer Yasir remarked, ‘the state of Odisha has around 46 million people, about the population of Spain, but many times poorer. The average income is less than $5 a day. The majority of people are farmers. Along the coast, many men work on wooden fishing boats. As Fani approached, the boats were ordered ashore.’

The BBC in its video report captioned ‘Cyclone Fani: Indians shelter from powerful storm said, ‘A powerful cyclone has slammed into India’s eastern coastline, bringing torrential rains and winds of up to 200 km/h (125mph).Cyclone Fani, one of the most severe storms to hit the region in recent years, made landfall at 08:00 local time (02:30 GMT) on Friday. More than one million people have been evacuated from the eastern state of Orissa, also called Odisha.Flooding has also been reported in several areas, and forecasters say a storm surge of 1.5m (5ft) could threaten low-lying homes. The cyclone made landfall in the tourist town of Puri, which is home to the 858-year-old Jagannath temple. It is expected to hit 15 districts in Orissa, one of India’s poorest states, before weakening on Saturday.’

The Times of London in its twitter handle said : Cyclone Fani has hit eastern India, with 124mph gusts bringing down trees and power lines along the Bay of Bengal coastline and “extensively” damaging the tourist town of Puri

‘Strong cyclone lashes east India, impacts Asian subcontinent’ went the headline story of Sun Myung Moon -founded ‘The Washington Times.’ It wrote, ‘Cyclone Fani tore through India’s eastern coast on Friday as a grade 5 storm, lashing beaches with rain and wind gusting up to 205 kilometers (127 miles) per hour and affecting weather as far away as Mount Everest. The India Meteorological Department said the “extremely severe” cyclone in the Bay of Bengal hit the coastal state of Odisha around 8 a.m., with weather impacted across the Asian subcontinent.’ 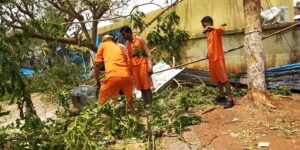 Emily Schmall of Associated Press – the New York headquartered news agency – reported: ‘By Friday afternoon, Fani had weakened to a “very severe” storm as it moved north-northeast toward the Indian state of West Bengal. In Bhubaneswar, a city in Odisha famous for an 11th-century Hindu temple, palm trees whipped back and forth like mops across skies made opaque by gusts of rain. The national highway to Puri, a popular tourist beach city with other significant Hindu antiquities, was littered with fallen trees and electricity poles, making it impassable.’

‘Cyclone Fani aftermath: Anger over lack of Government services’ says a videotape by Al Jazeera. Its reporter Scott Heidler reported   from Puri saying, ‘the cleanup after India’s biggest cyclone in 20 years is under way. Dozens of people were killed after Cyclone Fani battered Odisha state.There is mounting concern over what will happen next for the people left homeless. Local communities near Puri are frustrated with the lack of post-storm services.’