The long wait is finally over.

The 15th edition of the FIH ‘Odisha’ Hockey Men’s World Cup 2023 got off to a flying start at the Kalinga stadium in Bhubaneswar on Friday with Argentina and South Africa clashing in the opener of the 17-day long tournament organized for the second consecutive time by Odisha. 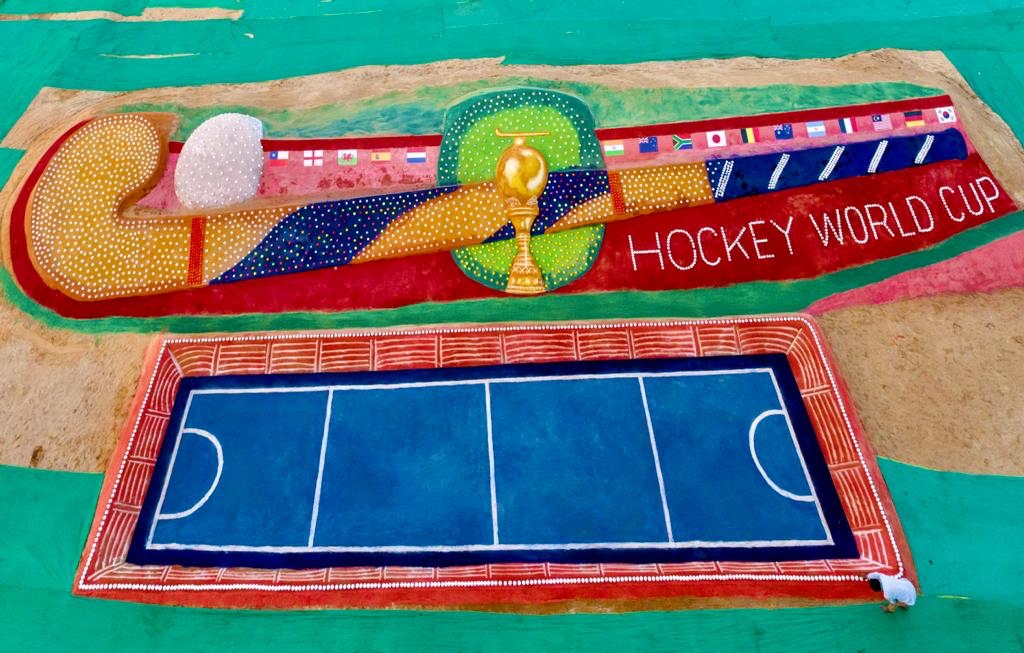 The beginning of the grand tournament signaled the end of the excitement that was built up over the last two years ever since the Odisha government announced to host the World Cup for a record second time in 2020. The spectacular opening ceremony at the Barabati stadium in Cuttack on Wednesday (Jan 11) that was witnessed by millions of hockey lovers left the world with glee and awe. 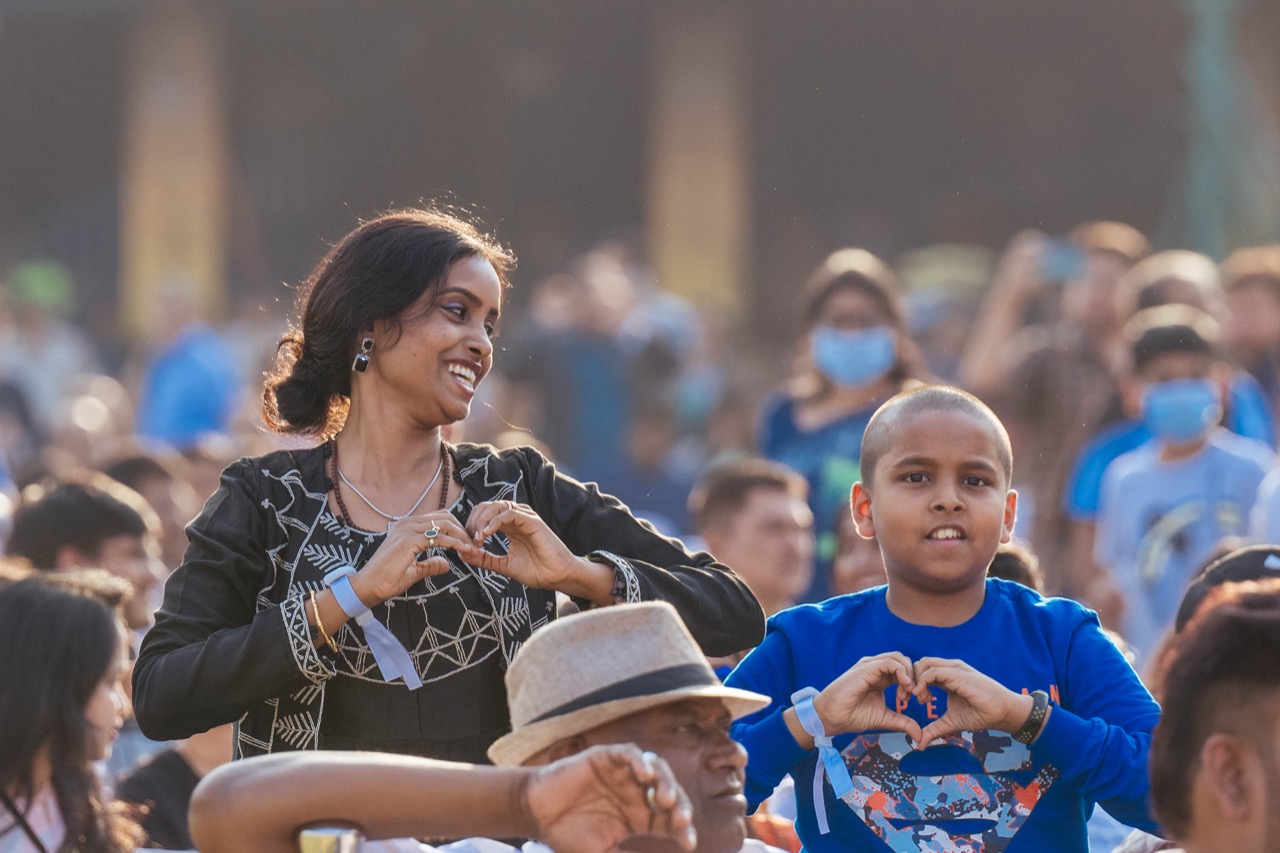 A total of 16 teams are taking part in this World Cup with the Indian team placed in Group D alongside Wales, Spain and England.

On Friday, excitement among people in the capital city of Bhubaneswar and co-host Rourkela was palpable, with the later hosting the tournament for the first time at the newly built 20,000 spectator capacity Birsa Munda Hockey Stadium (BMHS), the largest all-seater field hockey stadium in the world. Two league matches were held at the BMHS on the opening day, including India’s clash with Spain in Group D. 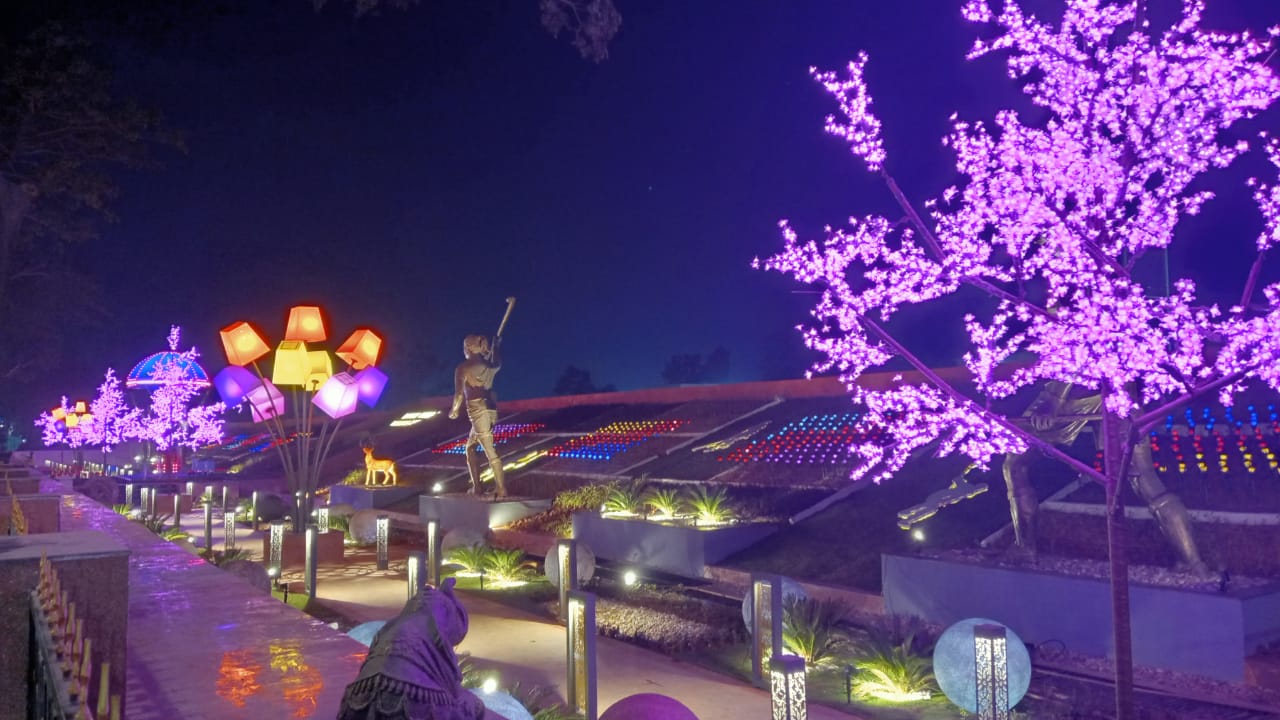 The two mega cities of Odisha: Rourkela and Bhubaneswar, have been painted blue for the World Cup with walls along all major routes adorning life size, and larger than life size, murals of players and various themes associated with the sport.

Buildings and trees lining the arterial roads have been decorated with colourful lights, lanterns and chandeliers, giving a festive look to the cities. Large hoardings, LED boards are displaying the World Cup message and theme song, while parks and public places have been brightly illuminated, bringing warmth to the winter chill. 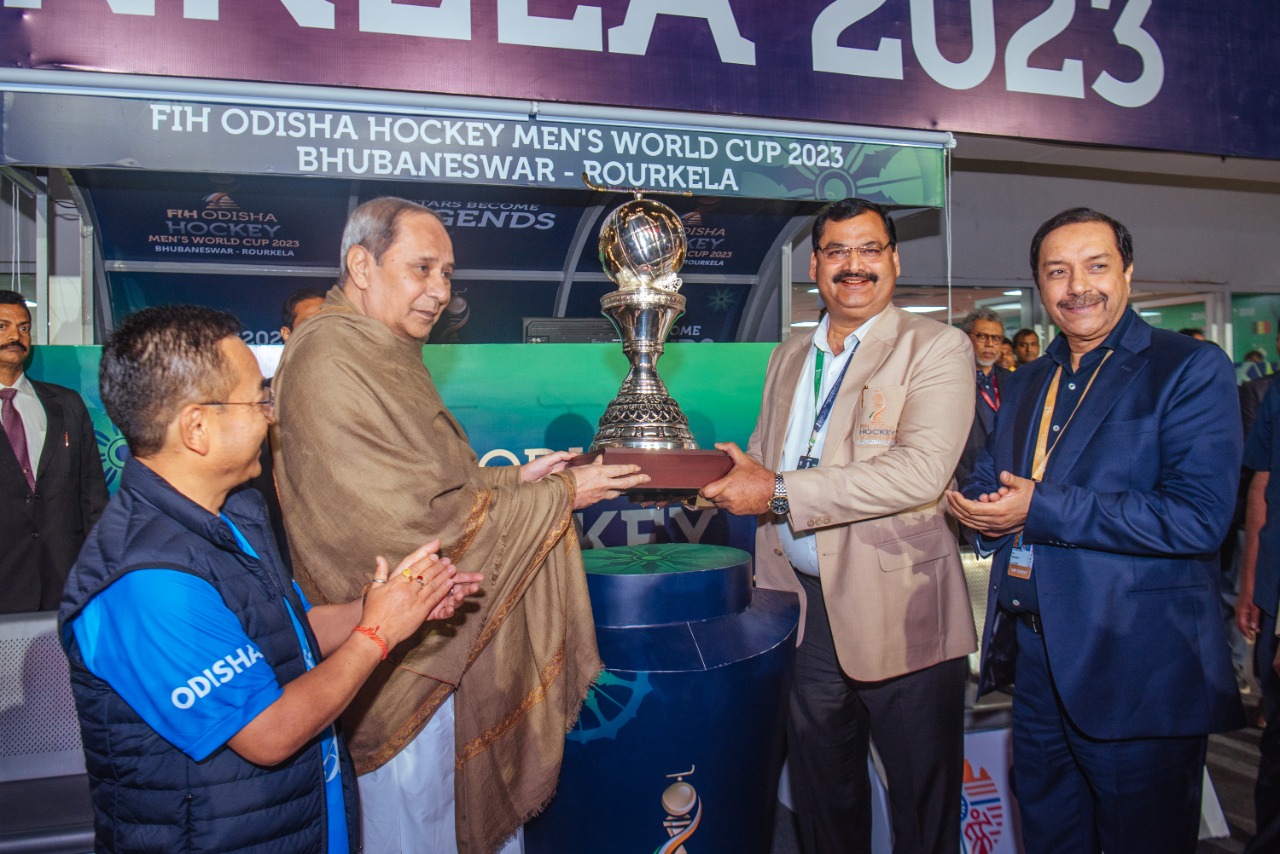 Long queue of spectators were noticed outside both the venues since the morning hours to grab tickets and catch their favourite players in action. Enthusiasm was particularly high among children and youngsters who were seen entering the stadium arena wearing jersey of their favourite teams and waving flags.

Flag sellers and face painting artistes were seen making brisk business as fans that included both youngsters and elderly men and women standing patiently to sheen their faces with colours of various flags before entering the stadium arena.

While the male fans mostly preferred cool tees, stylish bermuda shorts and bucket caps or jeans & tees, the female fans were seen in all sorts of attire…from saree, jeans & tees, salwar suits to some even flaunting fancy purses and heavy necklaces.

Batches of fans and supporters of different foreign teams preferred taking a detour of the tourist attractions in the ‘Temple City’ and ‘Steel City’ before assembling at the respective stadiums to watch the match. 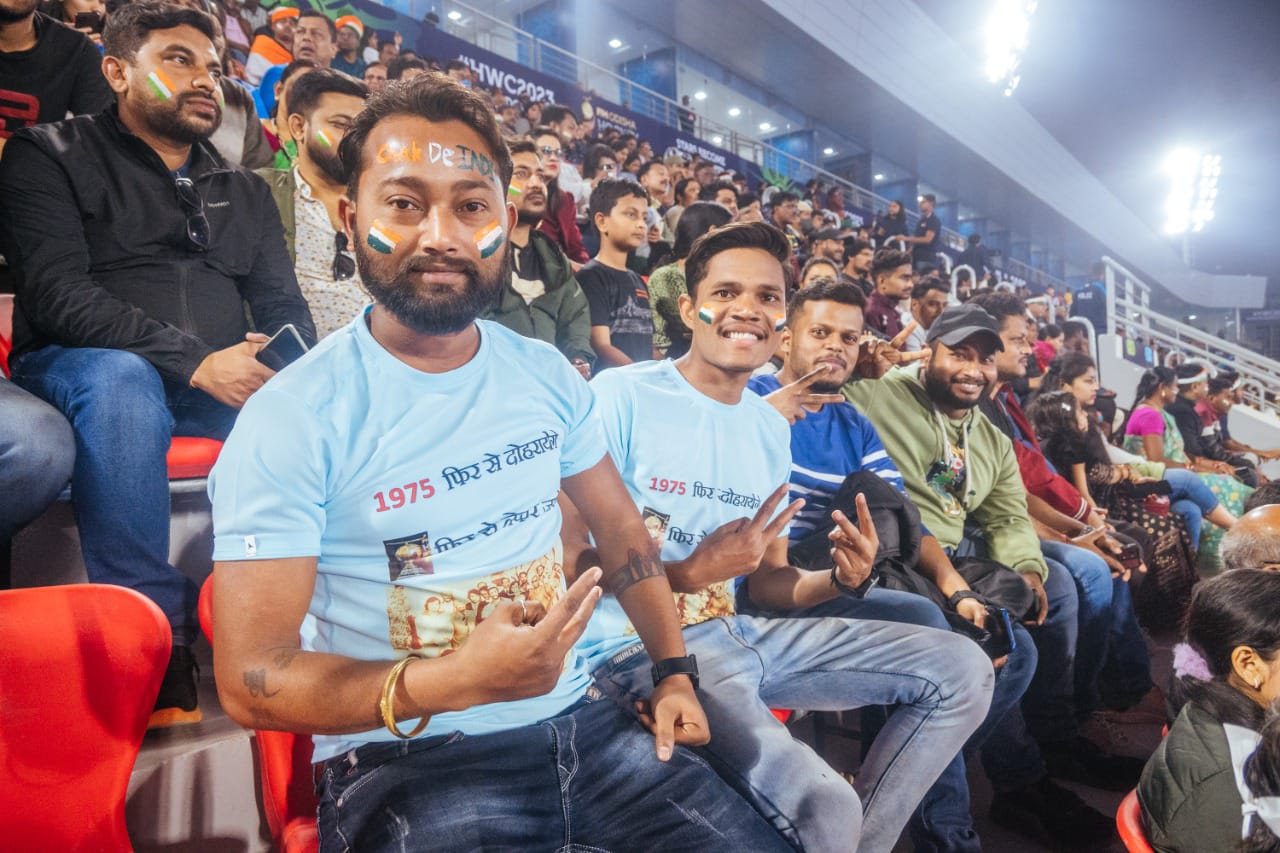 Meanwhile, the presence of the foreign fans has been received with warmth by the locals, some of whom were seen assuming the role of interpreters in guiding the visitors during their conversation with shopkeepers or security personnel outside the stadiums. This is on account of the fact that barring the English, Wales, South Africa and Australian teams (and their fans) most of the other teams and their fans barely know English.

The first day of the tournament saw some teams triumphing in the opening league matches, though there is still a long way to go to share the podium.

In the first match played at the Kalinga stadium, Argentina edged South Africa by a solitary goal, while mighty Australia demolished France by 8-0 in the second pool A match. 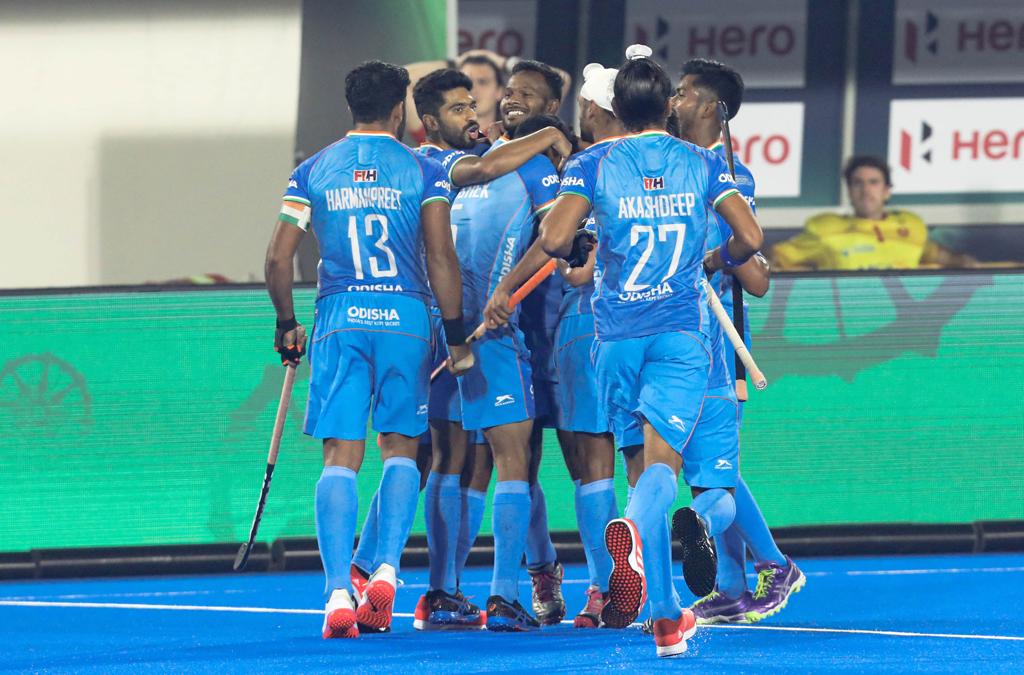 In the first Group D clash at the Birsa Munda Hockey Stadium in Rourkela, England thrashed Wales by 5-0. India playing their first rubber of the marquee tournament, outclassed Spain by 2-0, erupting the stadium into cheers and joy.