CM Patnaik invited the world to a brand-new arena, the Birsa Munda Hockey Stadium in Rourkela 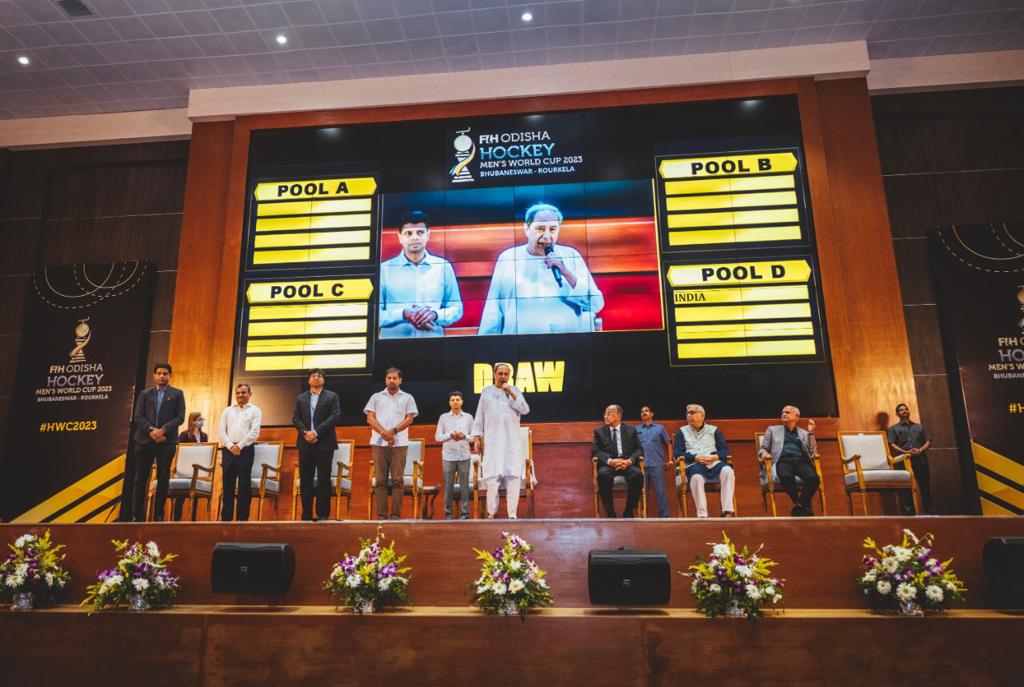 The draw ceremony for upcoming FIH Odisha Hockey Men’s World Cup 2023 was held today at the Convention Centre in Lok Seva Bhawan.  The draw ceremony was conducted in the presence of Odisha Chief Minister Naveen Patnaik.

The ceremony determined four Pools for the hockey carnival to be held in Bhubaneswar and Rourkela from Jan 13-29. Odisha is hosting the coveted trophy for the second time in a row – a record.

In the Pool A, World Number 1 Australia leads the group. It had won the bronze medal in the last World Cup in 2018. The world numero one team is up against 2016 Olympic Champions Argentina (World Rank 7), France (WR:11), who will be playing their fourth World Cup, and African Champions South Africa (WR:14).

In Pool B, reigning World Champions Belgium (WR:2) are the top seed and they were drawn to face 2002 and 2006 World Champions Germany (WR:4). Both European teams will face string Asian contingents, namely Korea (WR:12) and Japan (WR:17).

Pool C is led by Netherlands, who was the finalist in the 2018 World Cup. The Netherlands currently ranked number 3 in FIH rankings. They will squared up against the other Oceania representative New Zealand (WR:9), Malaysia (WR:10), playing their ninth World Cup, and newcomers Chile (WR:23), participating for the very first time in a FIH Hockey Men’s World Cup.

As already announced, India, Australia, Belgium and Netherlands were placed on the first row of their corresponding Pools based on the FIH World Rankings as per 1 June 2022.

Addressing the ceremony CM Naven Patnaik said, “We are always very proud to welcoming the best hockey teams and players of the world for such an outstanding event. This time, the appetite is even bigger since, on top of our magnificent Kalinga Stadium in Bhubaneswar – where so many wonderful sports stories have already been written – we are inviting the world to a brand-new arena, namely the Birsa Munda Hockey Stadium in Rourkela. This new stadium is a further testimony of our strong commitment towards hockey. Congratulations and best wishes to all teams!”

FIH Acting President Seif Ahmed said: “We can’t wait to see the best teams in the world in action in the new “jewel” of hockey, the Birsa Munda Hockey Stadium in Rourkela, which, alongside the iconic Kalinga Hockey Stadium in Bhubaneswar, will play host to the 2023 FIH Odisha Hockey Men’s World Cup. I wish to renew our sincerest thanks to Hockey India and to the State of Odisha for hosting the 15th edition of this World Cup. With their commitment, experience and passion, you can expect nothing else but an amazing event coming our way in 4 months time! I wish already the very best of luck to all participating teams and officials, and invite all fans to tune in early next year: an unforgettable hockey show is awaiting you!”

The pinnacle of the FIH men’s tournaments will be held from 13 to 29 January 2023 in Bhubaneswar and Rourkela, in the state of Odisha, India.