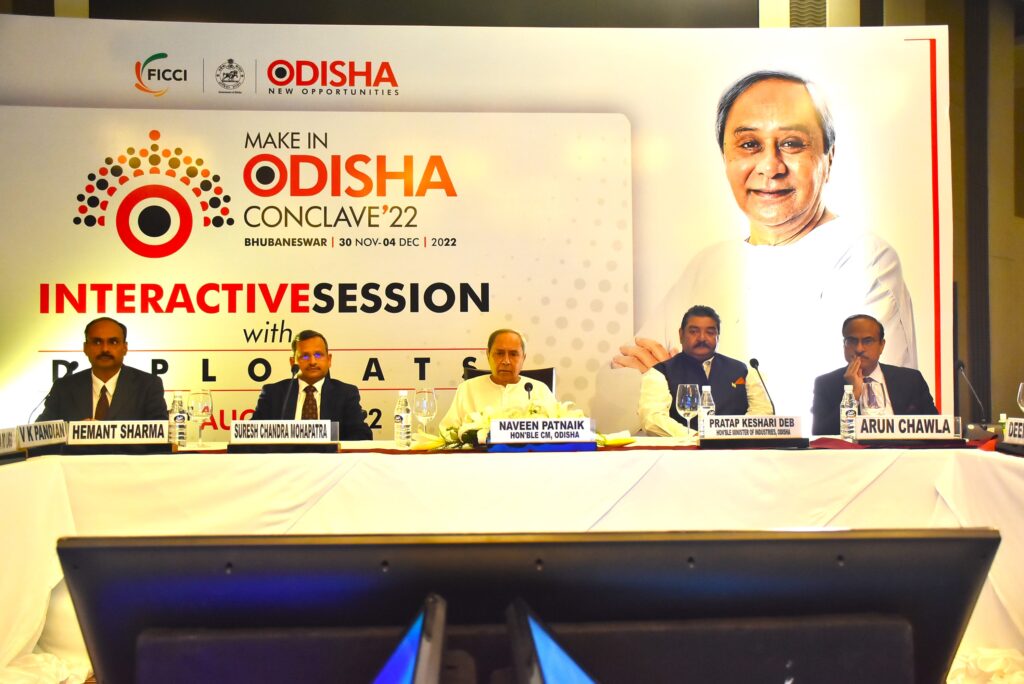 Ahead of Make in Odisha conclave later this year, CM Naveen Patnaik hailed Odisha has the prime investment destination in the country at a mega investor meet held here.

The CM said, “Odisha is one of the fastest growing economies in India and has consistently grown above the national average in the last decade and a half. We are fast emerging as a major industrial destination in eastern India because of our natural resource advantage and strategic location. Over the last 20 years, my government has focused on leveraging these natural advantages through progressive policy, efficient administration, and technological interventions.”

In the curtain raiser meet for the upcoming flagship investment conclave, also attended by ambassadors from 30 countries, the Chief Minister called on them to become a partner country of the Make in Odisha summit at Bhubaneswar to be held from Nov 30-Dec 4.

“I would request your excellencies to kindly consider being a Partner Country of Odisha during the conclave. As part of the MIO Conclave’22, we are setting up an International Pavilion at the venue. You may kindly consider setting up offices and stalls in the pavilion during the Conclave and conduct G2B and B2B meeting. We will provide all necessary facilitation,” said Naveen Patnaik. 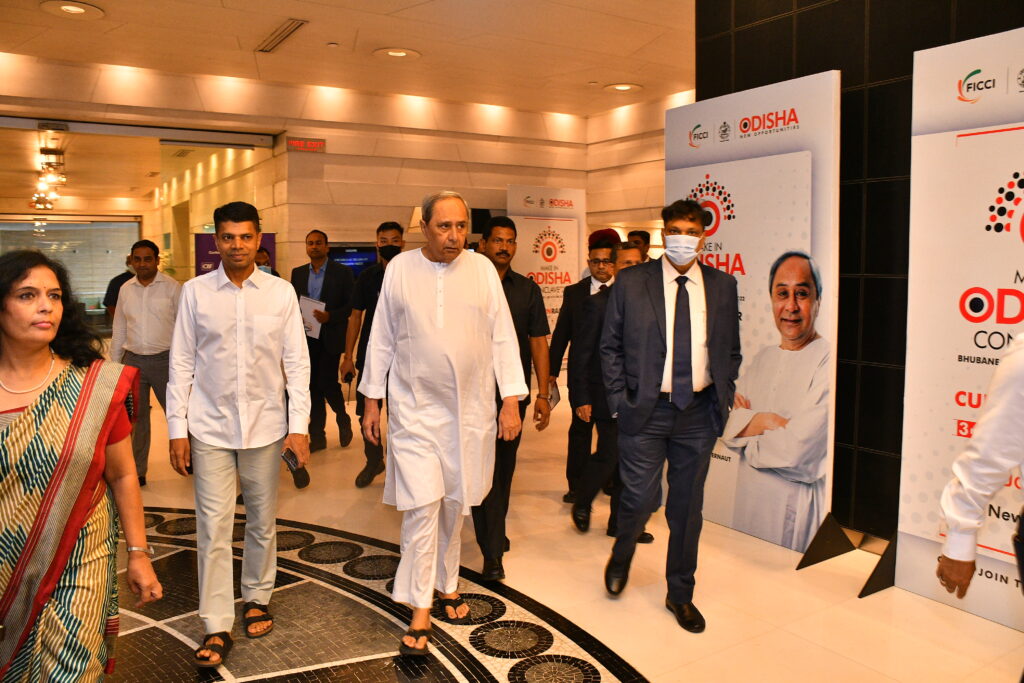 In order to promote Odisha as the country’s leading investment destination, the investor meet-cum-curtain raiser event was organised at the national capital by Odisha government in association with Federation of Indian Chambers of Commerce and Industry (FICCI)

In his address, Minister Pratap Deb said, “Odisha has always been known for its magnificent handloom industry, we are now firmly focusing on technical textile as well. We are setting up a technical textiles park in Bhadrak anchored again by IOCL’s 300 KTPA Polyester and Fiber plant. Similar to the chemicals/ petrochemicals and textiles sectors, we have also developed robust ecosystems for sectors like Food Processing, IT/ITeS, ESDM etc.”

He said, “Odisha’s industrial growth in the last two decades has been focused on developing highly skilled work force. With nearly 200 Engineering Colleges and 1000 ITIs, we are creating the most skilled workforce in the country. We have recently established a first of its kind, World Skill Centre (WSC), a premier advanced skill training institute. In order to fully realize the potential of the youth and entrepreneurs in the state, we have started Start-Up Odisha with the aim to encourage young people to work towards innovation, development and improvement of products, process, and services.” 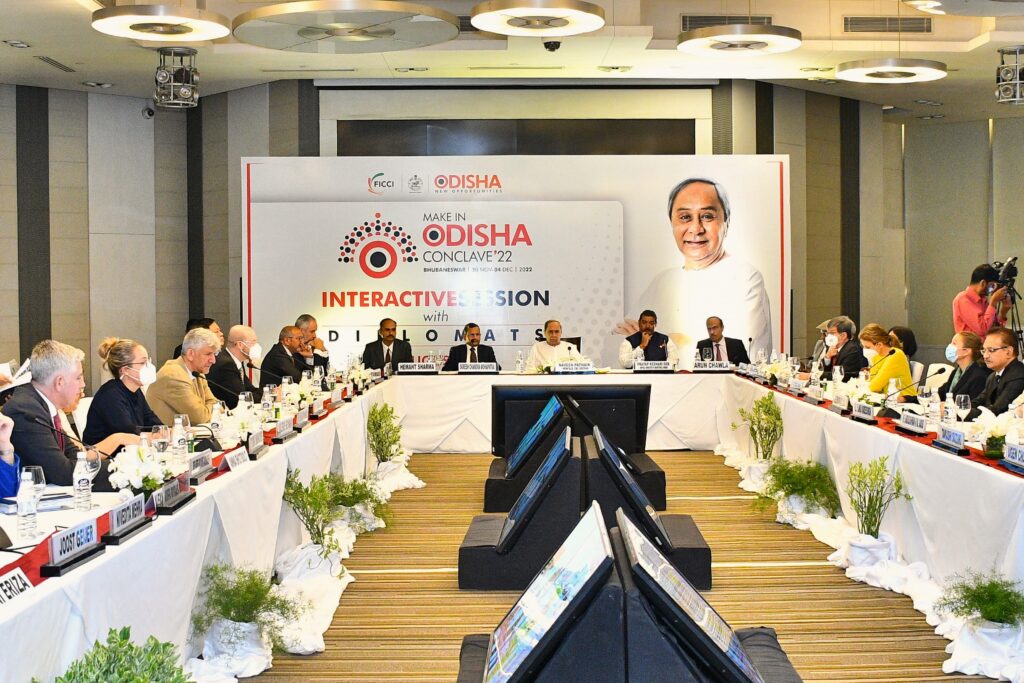 The Minister impressed upon the investors and dignitaries to be a partner in this transformational journey of Odisha and participate in the Make in Odisha Conclave-2022.

Addressing the meet, CS Suresh Mahapatra said Odisha has been one of the major breakout states in the country in terms of development, registering impressive GSDP growth rates year-after-year and industrializing at break-neck speed.

The CS further added that Odisha has been famous for trade and commerce, and today it is the largest producer of steel, stainless steel, and aluminium in India.

“We are emerging as a leader in sectors like chemicals and petrochemicals, textiles and apparel, IT and ITeS, Food Processing and others. We are also attracting investments in new age sectors like green hydrogen and green ammonia, data centers, EV and EV component manufacturing to name a few,” said Mahapatra.

The Chief Secretary said the Make in Odisha investment summit is not just to showcase the vast existing and emerging opportunities in Odisha, but also to build a platform for global leaders to discuss the future of business, trade and commerce, skilling and much more.

Industry Department Secretary Hemant Sharma, who also helms the industrial/investment promotion bodies like IDCO and IPICOL, highlighted on over two decades of stable governance in State, dominance in metal manufacturing and the commitment towards the future.

The curtain raiser investor meet was also attended by Md. Sadique Alam, Director of Industries, Arun Chawla Director General, FICCI, and other senior officials from the industries department, besides, over 500 delegates, representing various industries from across India.

The business conclave made a debut in Odisha in 2016, which saw a footfall of 18,500 and received over 120 investment intents valued at over Rs. 2 Lakh Crore.

The year 2018 witnessed the second edition of the conclave where the number of participants rose to 45,000 and 4 lakh cr investments.