“Some of the deepest convictions of our lives are gathered from data which, in their very nature, can influence no one but ourselves.” Speaking of how Swami Vivekananda was inspired by the apparition of Buddha wrote Sister Nivedita in ‘The Master as I Saw Him’-  probably the best of the biographies of Swami Vivekananda written so far.

For the majority of Indians born during the first six decades of the twentieth century, the name and legend of Swami Vivekananda were so near and dear that, like the writer of this article, most did not feel the urge to know much about him. An unexpected question, a momentary thought of a stranger unintentionally expressed aloud! “If such a great man like Vivekananda leaves life so early, what is to be expected from the ordinary man?” It was the interiors of that beautiful little book shop in the Ashoka Market near the railway station of Bhubaneswar, simply called The Book Shop. It was twenty years ago or more! Curious about the questioner I had gone round the tall self of books.

The man in his late sixties seemed to be a retired bureaucrat. In his hands was a book with Swamiji’s picture on the cover. At that moment it did not come to my mind that an ordinary man neither thinks of life nor about death, he just lives. Instead, the question got planted in my mind and for years after years continued to prod me to go deeper and deeper into the life of Swami Vivekananda.

In Sister Nivedita’s book, towards the end, there is a chapter with the title – ‘The Swami’s teaching About Death’. For her, when she first met the Swami, “…. any survival of personality, beyond the death of body… (was) either impossible or unthinkable.”

Then she quotes from a letter of Swamiji to a friend – “I had the premonition of your father giving up the old body ….The soul never comes nor goes. Where is the place to which it shall go, when all space is in the soul? When shall be the time for entering and departing when all time is in the soul…..All souls that ever have been, are or shall be, are all in the present tense, and – to use a material simile – are all standing at one geometrical point…”

Swami Vivekananda, the great soul, a man who victoriously attained the pinnacle of manhood. It is with a profound sense of awe that I study this human being who did not shun the most difficult questions about existence….”, writes Sankar at the beginning of his book.

A Writer was Born

Sankar, born to parents of a humble background was struck by the misfortune of losing his father to death when still a teenager. His sudden descent into abject poverty made him work as a typewriter cleaner, hawker, private tutor, etc. Finally, he became a clerk to the last British Barrister of Calcutta High Court Mr. N.I. Barwell continued with his college studies. But the sudden death of Barwell subjected him to the great grief and he was trying to find a means to honor the memories of Barwell.

First, he tried to name a street, and then install a statue. Failing in all he tried to write a book. And the result was ‘Kato Ajanare’( So Much Unknown,1959) which immediately became a best seller. Ritwik Ghatak completed the filming of it in 1962 but could never complete the post-production work. In the same unexpected way, the great best seller ‘Chowringhee’ had come to being. 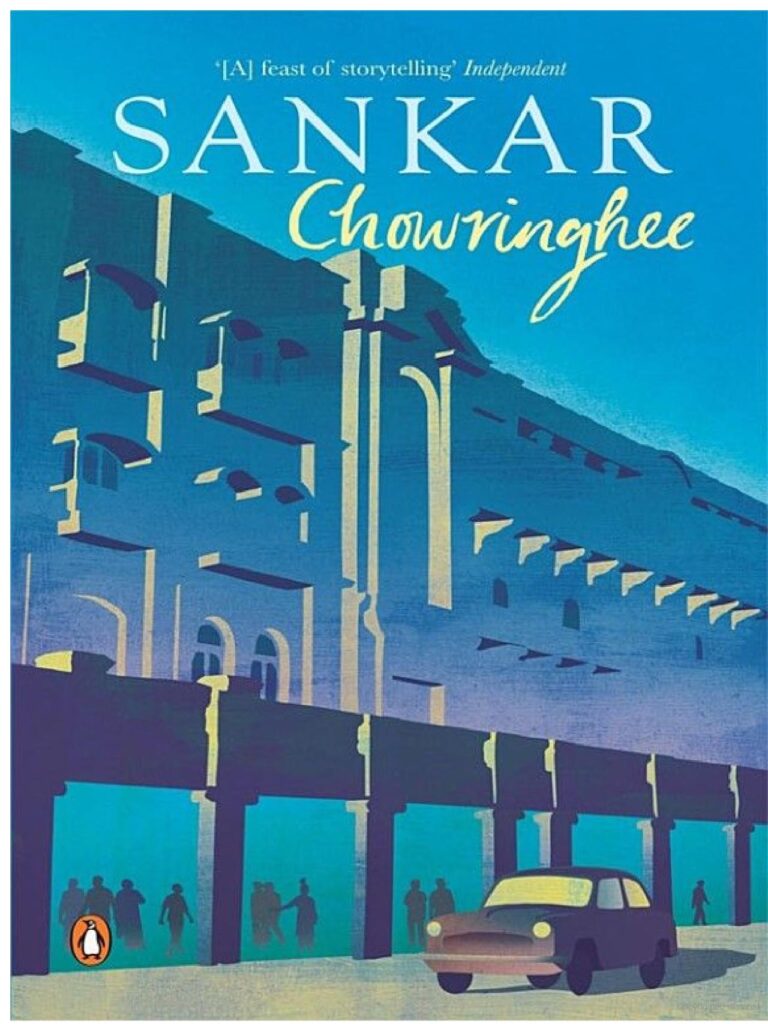 One rainy day Sankar was stranded at a water-logged crossing near the Grand Hotel. He began to think about and subsequently research the clients and workers of the Grand Hotel and thus the novel ‘Chowrinhgee’. The film version of 1968 was a great hit and is considered a cult movie. And, Satyajit Ray’s two ‘Calcutta Movies’ – ‘Simabaddha’ and ‘Janaarnya’, were based on Sankar’s stories.

Sankar, to his credit, has about fifty books- novels, collections of stories, biographies, travelogues, memoirs. In Bengal, his books are so greatly popular that once there was a story in circulation that bag-full books of Sankar are being offered in concession price by the book-sellers. Such popularity probably was the reason for the Kendra Sahitya Akademy to withhold the honor to him until 2021.

Sankar’s biography of Vivekananda in Bengali ‘Achena Ajana Vivekananda’ was published in 2003 when Sankar was already seventy years old and its unusual approach clearly says that it is the outcome of a deeply personal search. And it is quite apparent that whoever looks into the life of Swami Vivekananda is bound to delve deeper into the question of death in human life as the fact haunts us that Swamiji lived only thirty-nine Years, Five Months, and Twenty-four Days’ and this is the title of the fifth and the last chapter of Sankar’s book.

And on page one itself of the book, we read him quoting the startling words of Swami Vivekananda: ‘Sannyasa, in essence, means to love death. Not self-annihilation – but rather knowing that death is inevitable, offering oneself, in mind and body, completely to the good of others.’ ‘A Monk and His Mother’: This is the title of the first and the longest chapter of the book, reverently and extensively researched. And on the very first page, we read: ‘The opposing pulls of the desire for liberation and the obligation towards one’s mother is an issue which no one, not even the greatest monks, has been able to resolve with satisfaction.’

‘As learned and beautiful as Bhubaneswari was, it seemed her married life was one of endless grief. The untimely death of three infant children, the loss of her husband, the tragic deaths of three daughters in the prime of their lives, the fear of extinction of her family line, crushing poverty, and long and bitter legal battles with members of her extended family…. How could Swami Vivekananda not have worried about such a mother?’ His ‘hardships as a monk, how he fought against financial handles right up to his death, how he was forced to bow down his proud head to fulfill his filial duties- this complex saga….’ to realize it personally and present it to his readers with authenticity and with a loving truthfulness was the dream of Sankar since his youth.

“Alas, sickness, sorrow, and pain have been my companion….” reads a letter of Swamiji in Bengali. In this chapter – ‘Swamiji’s Health’ we read with surprise, awe and sorrow, what suffering this man had endured accomplishing his ideal, to fulfill his duty. The writer gives a list of thirty-three ‘diseases, medical conditions and other ailments that Swami Vivekananda suffered from during the course of life.’Although many of them were hereditary illnesses yet ‘it would not be wrong to say that most of Swami Vivekananda’s sufferings were brought about by his life as a wandering monk.’

‘Thirty-nine Years, Five Months and Twenty-four Days’: 3 During his second visit to America Swamiji‘s health was in bad shape. 15 January 1897 when he arrived in India “…as if the whole country is rising to honor me.” He wrote to Sara Bull, “I have not a moment to die as they say…..various methods of reception all over the country, I am almost dead…. I am so tired I do not know whether I would live even six months more…”

Yet by May 1897, he was out as usual in his lone pilgrimages and tours with groups of disciples. The most arduous of all was his journey to Amarnath. “On the way to Amarnath, I made a very steep ascent on the mountain….the determination came upon me that I must go by that (uncommon) path, and so I did. The labor of the strenuous ascent has told on my body.” He suffered a heart attack and the red patch in his right eye ultimately the loss of vision in that eye.

As remarked by many, returning from Amarnath he was a changed man. After a few days, he himself had told a disciple: “Since visiting Amarnath I feel as if Shiva is sitting on my head for twenty-four hours and would not come down. ”Sister Nivedita writes in her travel notes: ‘He always said that the grace of Amarnath had been granted to him there, not to die till he himself should give consent.’

Sankar did not refer to such aspects probably because he was concentrating on the ordinary aspects of the man, not the extraordinary experiences of the great monk. Nevertheless, he poignantly depicts the last day of Swamiji’s life- 4th July 1902, hour by hour, and the fact clearly is established that Swami Vivekananda was deeply aware that he was in the process of leaving his body.

In this regard, his third and last visit to America (20 June 1899 to 7 December 1900) was very important. On 18 April 1900 from Alameda, California he writes to an American disciple: “After all, Joe, I am only a boy who used to listen with rapt wonderment to the wonderful words of Ramakrishna under the banyan at Dakshineswara. That is my true nature, doing grand and so forth are all superimpositions. Now again I hear the voice, the same old voice thrilling my soul. Bonds are breaking, love dying, work becoming tasteless – the glamor is off life.

“Yes, I come, Nirvana is before me, I feel it at times, the same infinite ocean of peace, without a ripple, a breath. “Behind my work was ambition, behind my love was personality, behind my purity was fear, behind my guidance the thirst for power. Now they are vanishing and I drift. I come, Mother….. a spectator, no more an actor …..things are seen and felt like shadows.”

(The Author is a Poet, Spiritualist, and Development Professional)