We all live in a VUCA world, a word coined by the American economist. Vuca stands for volatility, uncertainty, complexity and ambiguity. In today’s world, with the complexity of modern life, one has to take appropriate responses to challenges, so that we overcome the same comfortably.

John Kotter the award winning author from Harvard Business School, along with co-author Holger Rathgeber, wrote the book ‘Our Iceberg is Melting’, which is all about changing and succeeding under any conditions.

It is a book that empowers and embodies a powerful message about change, that too under difficult circumstances. It became a masterpiece and took the western business world by storm.

The language of management experienced a different connotation and the book became an excellent handiwork of perseverance, evaluating the effect of change in man’s life. Very easy to read and easier to conceptualize, with its central concept, its central theme is change management.

Change is inevitable and a rule of nature. The living and the nonliving all change, and when they change, they experience a different world. change, itself remains a constant in life.

The author’s message in the book is loud and clear, we have to contemplate change, embrace change, accept change and manage the same, so as to remain victorious and be successful authors have used the metaphor of an iceberg and beautifully explains the concept of change and its acceptance as a reality.

This book is a bit different from What Alvin Toffler spoke about Future Shock or what  Martin Rees spoke of in his book On The Future. While this book speaks how to manage change, the above two authors spoke of the future.

There was a group of penguins living in Antarctica, the ice land, in a place named Cape Washington. They were living in an iceberg with a thick blanket of ice and the snow storms could not  do any damage to them. They were protected by it and a huge quantity of food was available all  around. They enjoyed their stay, lived together, shared and cared together and believed in the Aristotelian concept of social interdependence.

Fred was one such penguin, not a leader, but  curious and creative, who was watching everything carefully, analyzing the same, and was steeped in  contemplation. Fred confided to Alice, one of the junior leaders of the group, that the Iceberg is  melting and may fall apart .

Initially Alice could not believe the same, but Tred persuaded him to  swim and visit the spot. Both of them went and found canals of water like a small rivulet  leading into a deep cave of water inside, which indicated that the iceberg is melting .

Tred explained  that once winter arrived the water within the cave would expand due to freezing and put enough  pressure on the iceberg and then the iceberg would crack and melt. This was stunning for Alice who  after returning back tried to call a meeting of their leadership council and broke the news At first, nobody believed and Mr NoNo, a negative person, reacted vehemently.

The council group leader, Mr Louis, advised to comeback after some contemplation. In the meeting, some people liked Fred’s idea,Mr No No and a small group did not believe the statistics provided by Tred and despite the presentation by Tred did not believe or accept. There were two groups after the presentation, one concerned about the disaster they are going to face and the other group led by No No was objecting  to weather forecasts and were critical of Tred’s presentation.

Louis, the group leader, called for a general assembly. Tred brought with him a bottle full of water and capped it. He kept it on the mountain of the iceberg. Waited for the second day. Next day the  bottle cracked as the water within the bottle froze and expanded and as a result of which it exploded due to pressure. Now, everybody realized.

There was a professor in the group, who was contacted to discuss the findings as well as the weather reports. Mr NoNo said we can not leave the  iceberg as the cheeks are small and they need food and moreover while going to a separate iceberg, The big whales and seals may eat them But it was decided by louis, the group captain to leave the iceberg as they make a safe place before the onset of inclement winter One Seagull, flying over the iceberg rested on it. 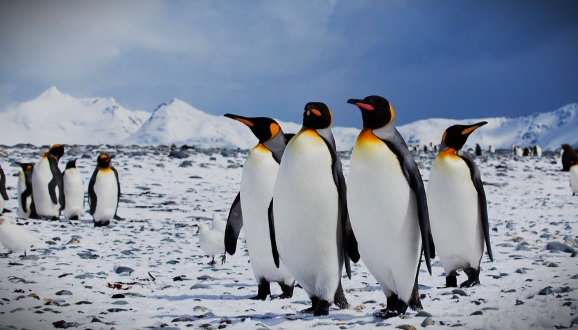 When some penguins asked them where he settled, he replied that he is nomadic, moves from place to place and enjoys varieties of food, places. Now, everybody became anxious to  search for a new iceberg and volunteer scouts were formed. They swam the ocean and found one iceberg, but it appeared food there was not adequate.

They again went and searched and this  time they discovered small iceberg and rested there and after some days a very big iceberg with  plenty of food around it and returned with them the optimism of a nomad, his adventure and the  prospect of a new life. The professor was allocated the job of weather forecasts, the scouts to  venture ahead, a small group of volunteers to support the cheeks if they felt tired while swimming and another group to carry the food on their way.

The division of labor was perfect and was based  on each one’s suitability, and well organized by the group leader. On the appointed day they left  their Iceberg, swam together, made it to the new Home, celebrated their success, had fun and a  purposeful life after avoiding an imminent disaster. In their adventure, they studied change, accepted it, embraced it, planned it, created an organization, based on professional competence and  a vision for the future.

The authors say “Tradition dies a hard death, culture changes with as much difficulty in Penguin colonies as in human colonies“. The lessons are that how the penguins created a sense of urgency, put a carefully selected group in search of guiding the change found a sensible vision of future, communicated that vision to others who would understand and  accept it, remove as many obstacle as possible, created some sort of success quickly, never let up until the new way of life was firmly established, and finally ensured that the changes would not be  welcome stubborn hard to die traditions.

This book is a wake up call for climate change and how to lead change in an organization. Very pleasant reading with beautiful illustrations.