One of the most controversial political assassinations in contemporary Indian history is that of Mahatma Gandhi. Several books have been written on this earth-shattering killing with varied interpretations, and every so often with overt ideological moorings.

‘Why They Killed Gandhi – Unmasking the Ideology and the Conspiracy’ by Ashok Kumar Pandey is a fresh and bold account of the assassination of the ‘Father of the Nation.’ Translated from original Hindi, this book lays bare the facts of the murder, and offers a zealous defense of the Mahatma and his politics. It delivers a trenchant polemic against the ideology of intolerance and perpetual ferocity that killed Gandhi. Delhi-based Pandey is an author and historian whose work focuses primarily on modern India. To that extent, this book has a different explanation.

Reads the blurb: ‘Three bullets were shot into the chest of Mahatma Gandhi by a certain Nathuram Godse on the evening of 30 January 1948. His true motivations, however, are today actively obscured, and his admirers sit in the Indian parliament as members of the ruling establishment.’

Writes Pandey in the Preface: ‘Gandhi’s life has never been a mystery. He bared open every aspect of his life, as seen in the ninety-two volumes of the collected works of Mahatma Gandhi and various other books/booklets written by him or people like Mahadev Desai and Pyarelal, who accompanied him as friends and personal assistants, and kept track of every activity of his.’

‘The details of his death, however, are for most people somewhat obscure. We do, of course, know that a certain Nathuram Godse fired three shots to take his life, but the conspiracy behind it largely remains hidden from greater public scrutiny.’

Divided into three sections and  comprehensible chapters on the whole sequence of events leading to Gandhi’s death, Pandey has taken the help of  court documents, the Kapur Commission Report, and other relevant papers to substantiate his thesis., He has also  tried to show the ideological conflict between the various political forces during India’s struggle for freedom.’

Argues the book: ‘The men who stood trial for the murder of Gandhi claimed that they were acting for a stronger, more united, India. Their 78-year-old peace-loving target, they felt, was the single biggest impediment to achieving that goal. They accused him of dishonesty and treachery; he was blamed for the Partition of India, for appeasing’ Muslims; and condemned for ‘fail[ing] in his duty’ to the people of this nation. To them, Gandhi had to die because ‘there was no legal machinery by which such an offender could be brought to book’. Do any of the accusations have any claim to truth whatsoever? If not, what, then, was the actual intention that these arguments made by Godse were attempting to hide?’ It further questions:  ‘Was V.D. Savarkar, among others, involved in the conspiracy?

‘The last days of Gandhi were ones of disquietude and loneliness. He repeatedly tried to lead an apolitical life. Attempting to provide equal facilities to the poor at a naturopathy center in Poona, or migrating to an unknown village, he was constantly trying to adopt social work as an alternative to politics. He resigned from the primary membership of the Congress in 1934, but after being in politics all his life, politics was not ready to leave him in this period of turmoil.’ 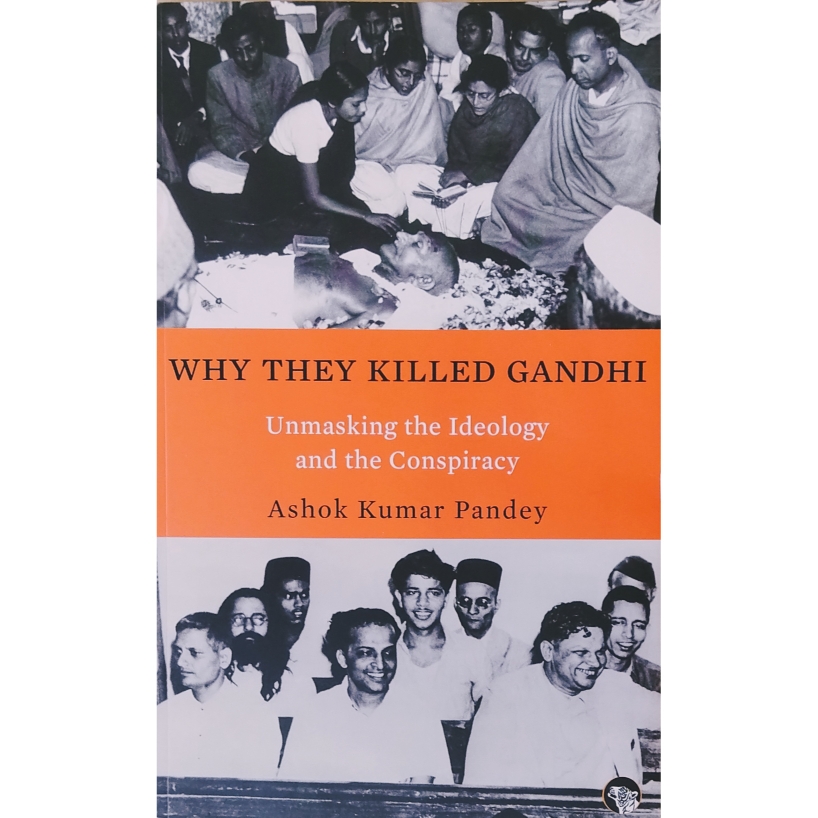 In an attempt towards addressing the deficiency of knowledge on the subject, Pandey painstakingly puts the facts in the correct perspective. According to him, since the conspiracy was not merely a criminal one but had an ideological dimension as well-something that portends greater danger in the long run-the events need to be understood.’

What this 250-page book tries to say and attempts is to remind us that Gandhi’s killing was ‘not a random act of a mindless killer.’ It was the culmination of a cold-blooded conspiracy. Pandey in this book has tried to dissect the ideology of religious extremism. What Pandey does in this book essentially is to present a narrative based on historical facts and research in ‘the so-called post-truth age’. He intends to rip to shreds the abhorrence emitted against the likes of Gandhi, Nehru and other makers of modern India.

The finest point about this book is its storytelling. The facts, incidents, and references have been woven in such a way that it doesn’t appear as a mere chatterbox. Neither is it loaded with only factoids. Other than mere facts and references, the book also throws light on the paradigm and tries to uncover the bluff which has been existing on the assassination of Gandhi.