From the Sambalpuri Patta to Maniabandha Ikat, Odisha has a rich history of handlooms and the weaves spawning the state are famous all over the world for their skill and dexterity. The weaving skills are steeped in pure craftsmanship and the lacing tradition goes beyond generations.

With an incredible variety of handlooms, they are a class in themselves. No other place in the Indian subcontinent enjoys such a profession of creative energy as the handlooms of Odisha.

‘Textiles Tales from Tribal Odisha’ by Raja Parija throws fresh light on the unique tradition of textiles from the tribal regions of Odisha. Odisha has the  sole distinction of housing more than sixty culturally vibrant tribal communities including a dozen vulnerable ones spread over fourteen  districts, which makes Odisha one of the fascinating ethnographic states of the country. 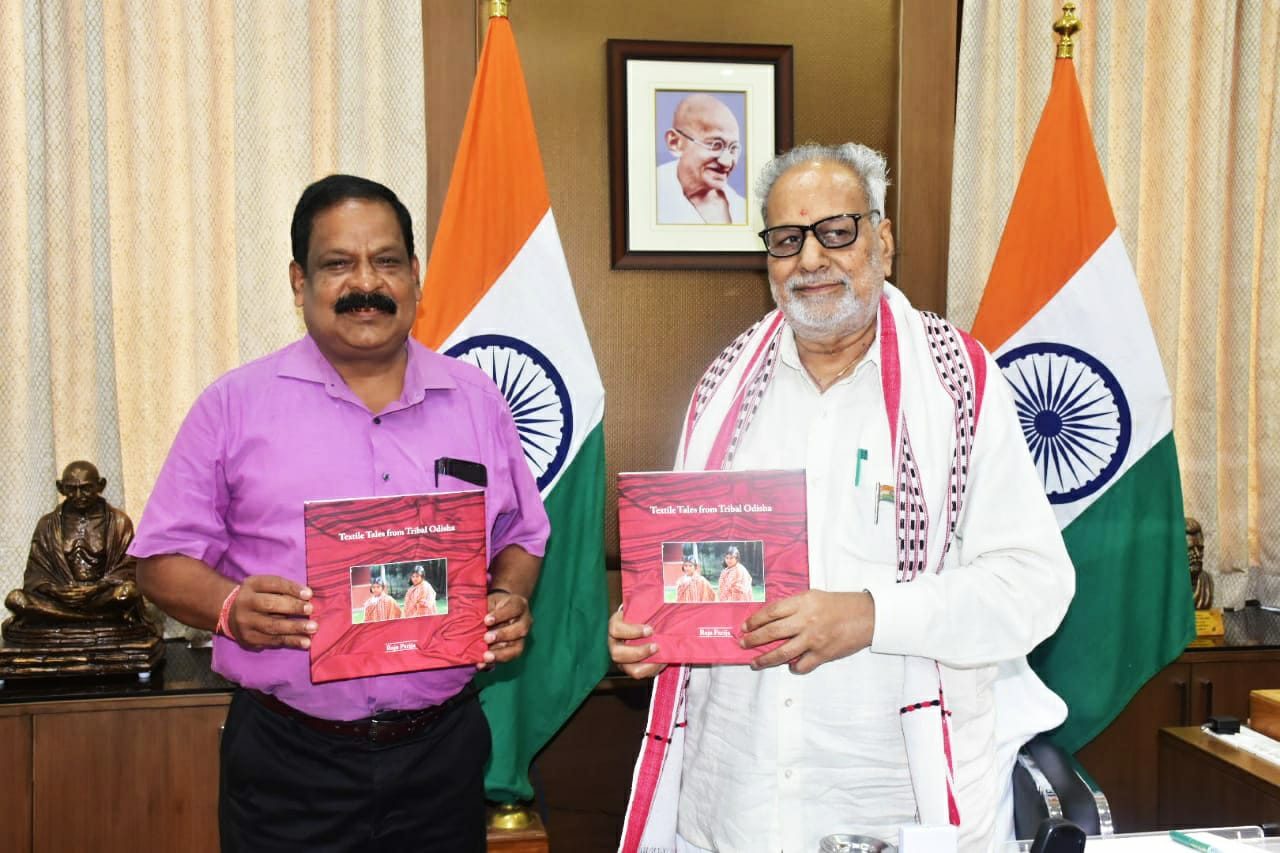 A former bureaucrat, Parija is an avid traveler, an independent researcher and an ace photographer. Passionate about the rich cultural heritage of the state, he has been on  a mission of his life to document the unexplored facets of Odisha. He has been bringing out spectacular books – the  earlier ones being on Cuttack’s filigree works, the birthplace of Netaji Subhash Chandra Bose ,Cuttack’s historic museums ,divine fabrics  and the royal palaces of Odisha.

This book talks about the tradition of six tribal fabrics :‘Ringa’,‘Phuta’,‘Kerang’, ‘Gatungkap’ and ‘Arsi Oliakana’,‘Kotpad’ and‘Kapdaganda’ which are today much sought after by fashion designers from across the globe.

A well–researched book on a hitherto unexplored subject so far, ‘Textile Tales from is anecdotal, rich with text and profusely illustrated. For instance, Dongria Kondhs of Rayagada still wear the beautiful Kapdaganda shawls,  use turmeric, wild flowers, bean leaves, roots and even soil to dye threads for these traditional shawls. Not really a coffee-table book, it has all the ingredients of subterranean study. 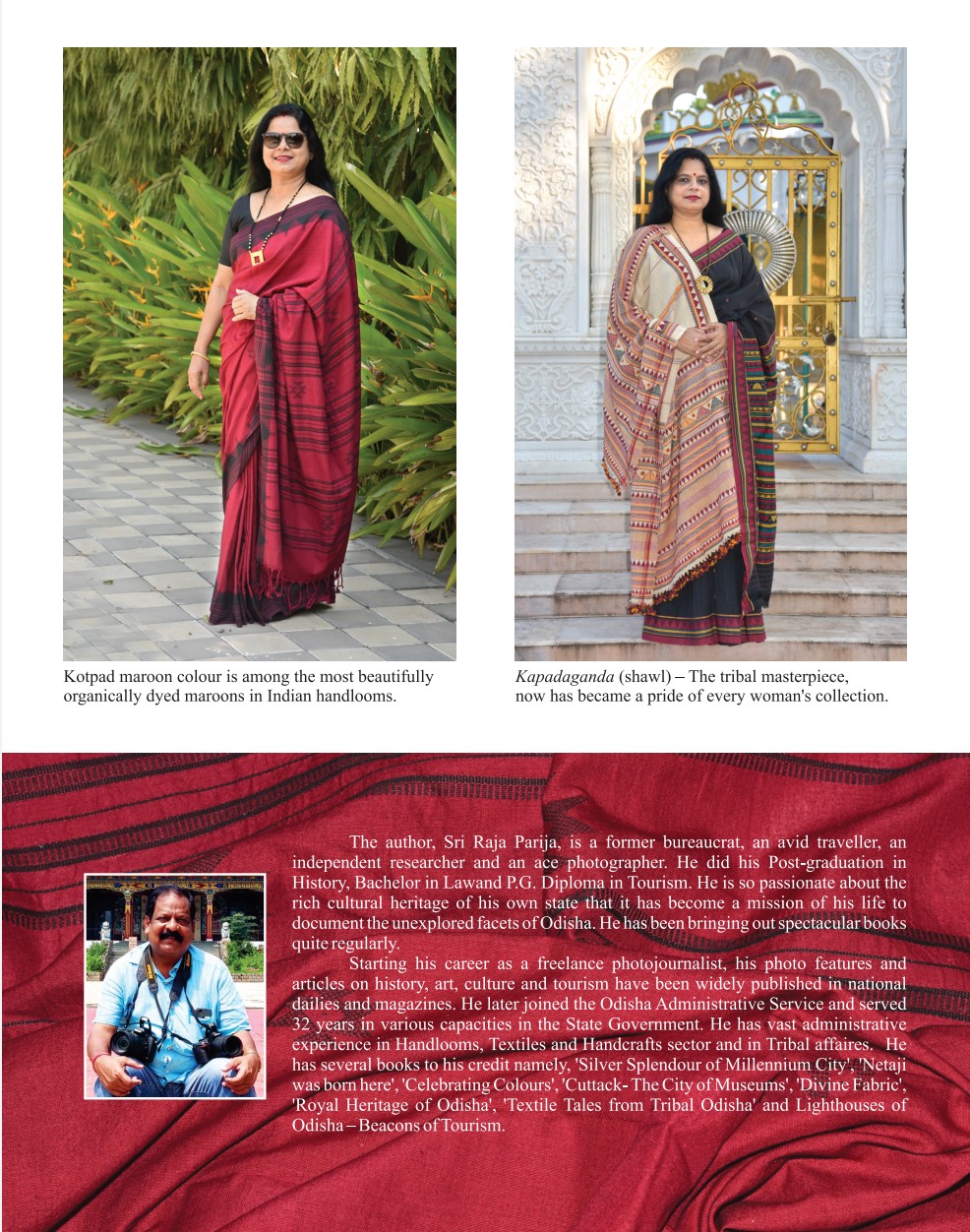 ‘The Kapadaganda symbolizes the rich heritage, culture and identity of Dongaria Kandhas. It has great cultural significance. As the Dongaria girls are well versed with the tradition of needle craft, they embroider this unique shawl with excellent craftsmanship. It is a way of life for the Dongrias. They find an emotional involvement in the pursuit of crafting the shawl. They knit the shawl in a definite design. It requires a keen sense of arithmetic and geometry to translate the design.

‘The design process has been passed from generation to generation and it is the duty of elder women to teach the young girls of their family to carry forward the same to the next generation. It is a tradition of the Dongaria Kandhas that, every grown-up girl is expected to weave a few numbers of embroidered shawls. 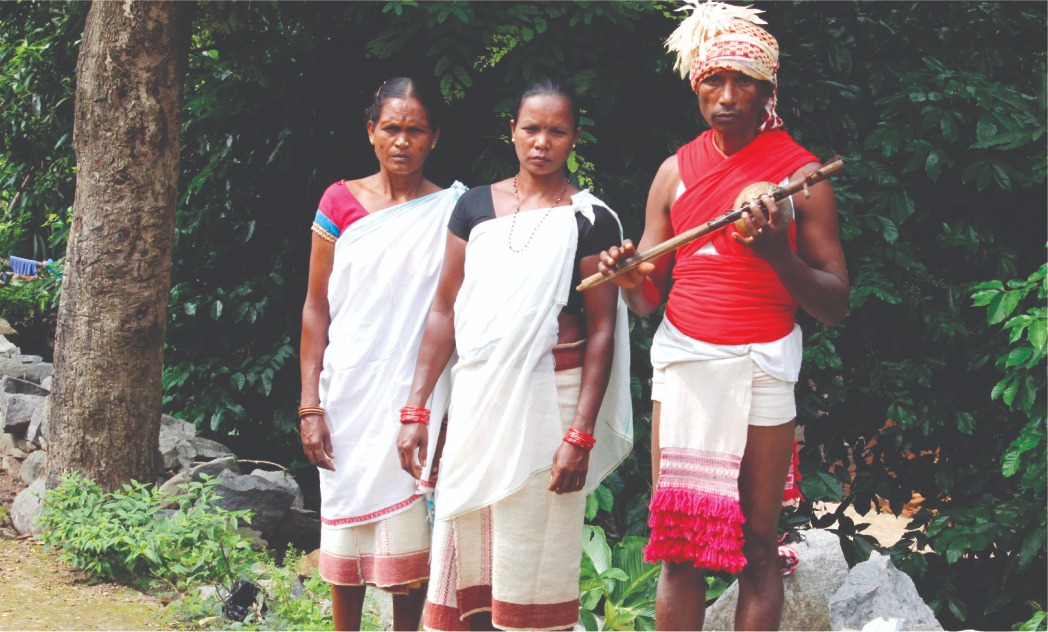 Writes Parija in his book: ‘Like Odisha handlooms, the ethnic textiles of tribals of Odisha are also of high quality .It depicts the cultural heritage of the respective communities and their traditional creatively. Unfortunately we are not able to discover all the hidden treasures of tribal textiles. Each tribe has definite artistic textile tradition, whose skill and expertise are yet to be documented, but have been silently passed down through generations.’

Also, the naturally-dyed handloom fabrics of tribal Odisha have captured the attention of fashion designers across the globe lately. Tribal motifs on hand-woven shawls and fabrics like Kotpad and Kapdaganda have been recognized for their beauty and nimbleness. But there is a concern which can’t be overlooked. While most of Odisha’s tribes have certain textile traditions, they used to knit for their own use. 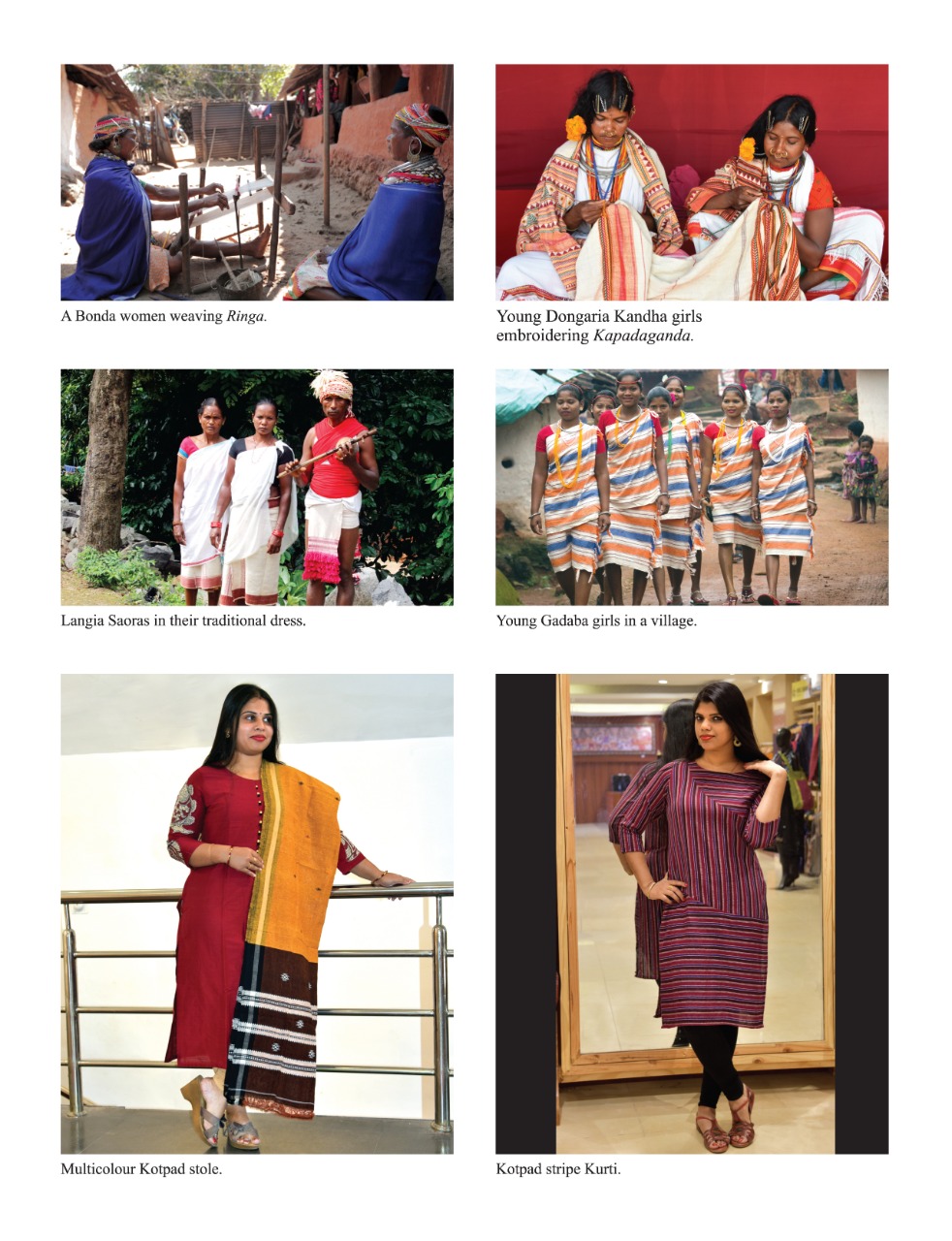 Nature is the main inspiration behind the textile tradition of the tribe. In fact, they live a life in tune with nature. Their textile is no-chemical, eco-friendly and high quality fast dying. It is a major source of creative and gainful engagement in the non-farm sector: We must encourage them with all support to preserve the oldest forms of tribal weaving arts.

The book has tried to capture in its frames the hand-woven textiles of Bondas, Santhals, Gadabas, Lanjia Souras, Mirigan and Dongria Kondhs. During his period of office as director of the tribal development department, Parija had closely worked together with the tribals of different regions and knew quite a bit about their art and crafts. 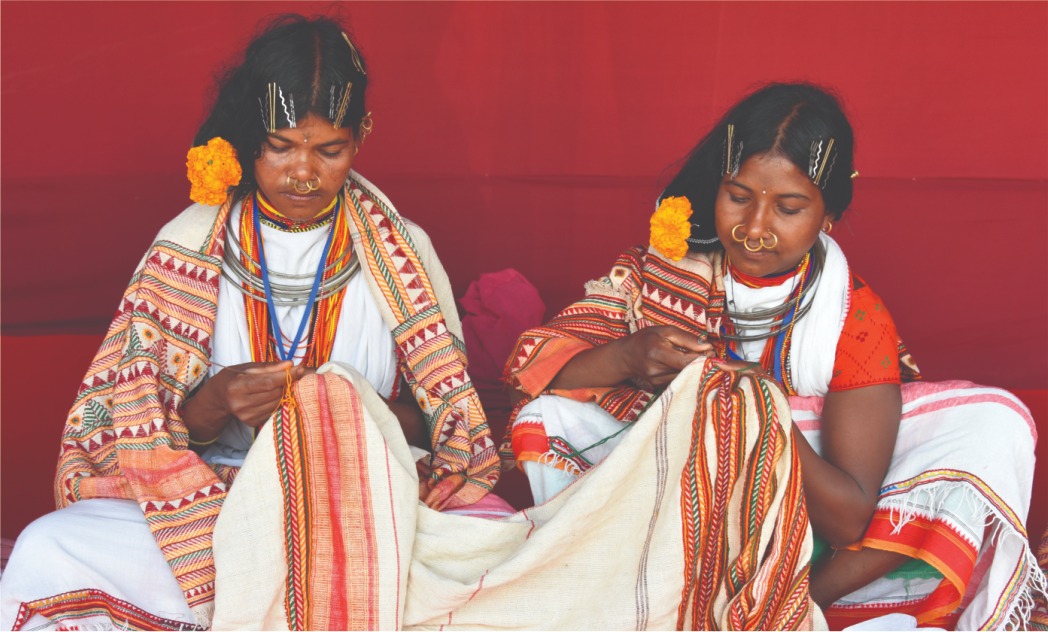 According to the author, in today’s fashion scenario, the handwoven fabric and usage of organic color play an important role. The natural-dyed handloom fabrics of tribal Odisha are yet to create a global brand. However, in the recent past, it captured the attention of those who matter. The fashion designers nowadays are more focused on hand-woven fabrics and sarees of Odisha tribes. Particularly, tribal motifs on the hand woven sarees and fabrics of Kotpad and Dongria Kondh shawls are much sought after.

The Kotpad natural-dyed fabric is the first variety of handlooms of Odisha that received the Geographical Indication of India tag in 2005. One of the master weavers of Kotpad has also been honored with the Padma Shri award for his contributions to enrich the textile traditions of India.

Dwelling on the economic viability of the textiles, Parija says Odisha has a huge potential in the creative economy because it is backed by the state’s rich cultural heritage.

The tribal textiles, like tribal crafts, should be conserved, integrated in its scope for income generation and tourism related activity. Since the tribal weavers lack professionalism, they should be the right motivation and aid so that they can establish their presence in the global fashion industry. Overseas markets should be explored as the tribal textile of Odisha stands apart from other categories of fashionable textiles.

Says the book: ‘Earlier, the weavers sold their products in the local Adivasi Hats of Koraput and Jagdalpur in Madhya Pradesh. But due to the intervention of State Government, the Kotpad products are now available in ‘Adisha’, the brand outlets of the tribal development corporation and in ‘Boyanıka’, the brand outlets of Odisha State Handloom Weavers’ Cooperative society. Kotpad products are also displayed in tribal craft melas. 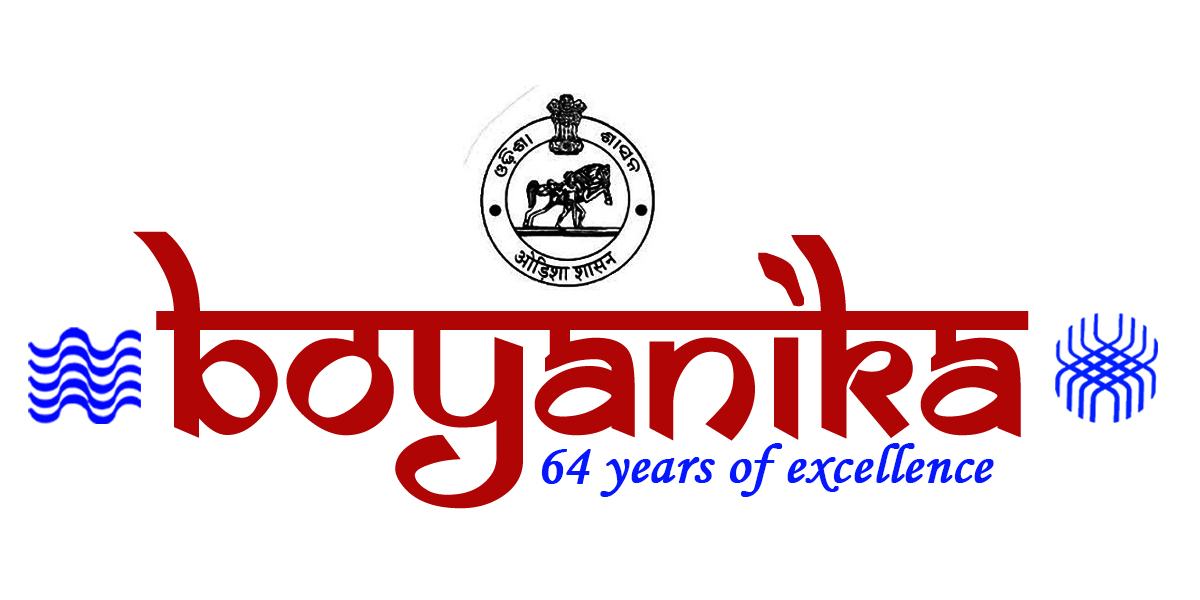 The book is aimed at documenting the exceptional tribal traditions, their sartorial preferences, and the interlinking livelihood patterns. At a time when the ethnic traditions  are on the verge of extinction owing to the onslaught of modernity, books such as this one are well-timed and make for essential writing.

By showcasing, promoting  and popularizing  the rich tribal textile heritage of Odisha, Raja Parija has done a yeoman’s’ service. The book   will be an invaluable guide for  fashion designers, tourists, students, art aficionadas  and even  general readers.