I sent a postcard letter way back in 1981 to Dr Bansidhar Panda , the first known industrialist of international fame from Odisha seeking an appointment. He was the first highest qualified Metallurgy Expert from Odisha.He was then Chairman, IMFA Group of Companies. I was not hoping for a reply as many such letters to many people remained unanswered by then.

A week later I got a reply from the then Manager, Public Relations of IMFA to come for a personal talk to IMFA office at Bomikhal, Bhubaneswar on a specified date and time. The letter was signed by none other than Dr Panda. 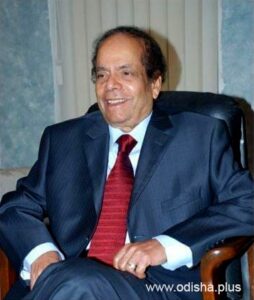 The date approached. I reached the IMFA office.

I was asked to sit in a room. Then, somebody came with a cup of tea.

After a few minutes I was asked to go to a specific room.It was the room of Manager, Public Relations.

He looked at me with affection and said, ‘You look to be very young. How old are you?’

By that time I understood that they were considering me for a job in IMFA.I gave him my CV.

Then he said,’ Your qualification is just graduation and you are under age. But I found from your CV that you will be 21 next month. We can then appoint you as a clerk in our PR Department.’

– Clerk? I am already an Editor in a Publishing House .

I bluntly refused and came back. Later I came to know that he wanted to appoint his brother-in-law there.

Dr Panda was in their plant site at Therubali. I came back. Since my post card was to appreciate him and not for a job , I was not disturbed at all.

Some days after I met Dr Panda in a meeting at Bhubaneswar.

Then I told him, ’Sir, please do something to promote Odia Literature and Culture.I wrote you a Postcard for that.’

In due course IMFA instituted an award for promotion of Odia Literature and nominated Dr Nityananda Satpathy as its Secretary. I joined Odisha Education Service and later NCERT from where I came to NBT.My uncle Sarat Chandra Mahapatra had edited a book and the first copy was to be presented to the then President of India Dr Shankar Dayal Sharma . A function at Rashtrapati Bhawan was organized for the purpose. I was sent by my uncle to invite Dr Panda who had a suite in Qutub Hotel to attend this programme.

He saw my card and looked at me with an affectionate eye.

– ‘You are the same boy.What are you doing in Delhi ?’ Dr Panda asked.

‘Our Manager, Public Relations has retired. Why don’t you join us ‘, Dr Panda said.

‘Thank you Sir. But, time has brought me to a great height. My father was an Editor and I always wanted to be that. It is not possible for me to accept your offer. Had it been in 1981 it could have been different ,’ I said politely.