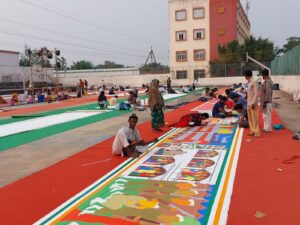 In the recently concluded Kala Kumbha in Bhubaneswar being organized by the National Gallery for Modern Arts (NGMA), New Delhi, the most conspicuous presence was the visual narratives of the Patua painting tradition. The Patua scroll paintings normally narrate stories in visuals with simple brush lines to depict various characters and their actions.

As the intended goal of NGMA to create a meta-narrative using visual vocabulary of the history of freedom movement, the story telling through Patua scroll paintings perhaps best suited for the purpose. The folk painting tradition of Patua is still in practice by the artists from Midinapur and Kalighat of West Bengal having their Hooghly and Birbhum, Bankura and Burdwan variants.

During the week-long event the Patua artisans painted the stories of unsung heroes of freedom struggle from West Bengal along with the story of renowned freedom fighter Subhas Bose using four canvases of 6 ft by 75 ft size. One canvas was totally devoted for visual biographical sketch of Subhas Bose which was really engrossing for one who witnesses the interesting anecdotes of his life and time with clean and smooth sketches for easy grasping.

They were about two-dozen artisans belonging to three families of Midinapur. It was really not an easy job to sketch such a huge canvas within only a week’s time for them. Besides, the difficult part of their sketching was to maintain the proportion of figures on a 6 ft high canvas as they practice to sketch on much smaller size canvases under normal circumstances. However, they could overcome the challenges within very less time and finish their job within the stipulated timeframe.

Patuas are an artisan community whose history of origin is traced back to 13th century. It is believed that they are Hindus but converted to Islam. Today, they practice customs that are both Hindu and Islamic in nature, however, the majority of them are impoverished Muslims who rely on patronage from mainly Hindus, but also increasingly from tourists who buy their scroll paintings. They mainly belong to West Bengal with some spilling over to Bihar, Jharkhand and Bangladesh. They move in villages from door to door and tell their stories displaying their painted scrolls and earn their livelihood.

As I witnessed their scrolls it struck me that their medium is story telling with visual juxtaposition like the earliest state of bioscope that used to induce speed to static pictures. For me Patua scroll paintings are very powerful medium for communication, even today, for the simple visual narratives the artisans implement in delineating the stories of the past and present, and sometimes imaginary as well.

[The writer is a Senior Journalist, Art Critic and National Award winning Filmmaker]