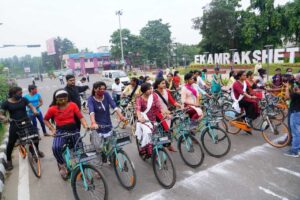 Bhubaneswar, October 31: In order to promote non-motorized transport and cycling across the Smart City, the Bhubaneswar Smart City Limited (BSCL) today organised an exclusive cyclothon of transgender between EkamraKshetra Plaza near Sishu Bhawan Square and Temple Plaza near Ram Mandir Square. This was perhaps the first of its kind all-transgender cyclothon in the city, organised for a cause.

Participated by more than 50 people from the transgender community, the event was sponsored by Khimji Foundation. Members of SAKHA, a community-based organisation of transgenders actively participated in the event with great enthusiasm under the leadership of Meera Parida. Well-known Odia TV actor and social worker Russy Patnaik also joined as a guest and encouraged the participants.

It can be mentioned here that Bhubaneswar, as part of its citizen-centric planning based on the Smart City Proposal, has developed a quality city-wide facility for cycles and pedestrian ways so that the emissions are less and citizens enjoy a healthy and lovable environment to breath in fresh air with minimal load of pollutants and particulate matters in the neighbourhood air. The city has relied on its NMT planning to make it more citizen-friendly. 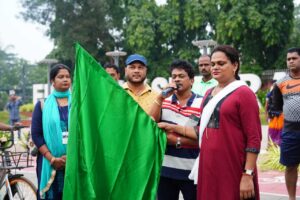 Managing Director and CEO of Bhubaneswar Smart City Limited Sri Sanjay Kumar Singh said “we always believe in inclusiveness and for a better city we include all communities into the mainstream. While the self-help groups (SHGs) of transgender communities are given the responsibilities of manning the parking spaces, their participation today in the cyclothon has again proved that we are going to include all socially disadvantageous groups in our citizen-centric activities and planning.’’

In July this year the Temple City bagged India Cycles4Change Challenge Stage-1 Award as it was adjudged among the top 11 Cycling Pioneers of the nation. All the 11 cities are going to receive an award of Rs 1 crore each to scaleup their cycling events in their respective cities.

Speaking on the occasion, leading transgender leader of Odisha and organizer Meera Parida said “In the past we have always participated in the pan-city events for the city administration. Under the Smart City mandates we want to have more activities in future and we are ready to participate in them. We had a memorable participation during the Patha Utsav days along the Janpath on every Sunday, promoting NMT philosophy.’’ 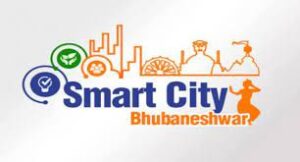 In fact, under the India Cycles4Change Challenge the Bhubaneswar Smart City has planned a series of activities in the coming days to promote cycling among all age groups and communities. This would, in a way could be a catalyst for change to make cycling a popular alternative and promote NMT to make the Capital city a clean and green city on every aspect.

This year Smart City Bhubaneswar had come as the fourth ranked city among the top 10 Liveable Capital Cities in India. Interestingly, the Temple City had topped in the Citizen Perception Survey with the highest score of 94.8 out of 100 as per the New Delhi-based Centre for Science and Environment (CSE’s) Ease of Living Index Report, 2020.