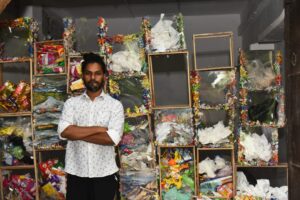 Delhi-based artist Manveer Singh, the winner for the “METIS Initiative on Plastics and Indo-Pacific Ocean 2021” Residency of city-based Utsha Foundation for Contemporary Art, started his work yesterday evening at the Utsha facility this evening. The art residency is being organised in collaboration with French Development Agency (AFD).

It can be mentioned here that Manveer’s entry was selected from 26 applicants. His project “From Plastic to Art” was selected by a two-tier jury comprising experts in the field of Art, Environment and Urban Development during September last.

The artist, while presenting his concept today, said “concerned with the increasing departure from mother Nature, and over use of plastic I have chosen the same as my material for the art work. My artistic journey initially entailed creating art inspired by Nature.”

He also added that his core values as a global citizen were creativity and sustainable development. As a result, during last three years, his life and works had been centered on how planet Earth was transforming into planet Plastic. The aim of the METIS-aided project is to do a series of public interventions in the city and the sea beach of Puri.

Through such engagements with public, Manveer feels, he aims to make the public sphere more attuned to the questions around sustainable development and to initiate a dialogue regarding the environment and one’s individual responsibility towards it. And the question is, why is this plastic unnecessarily and being served to us even though we do not seek it? 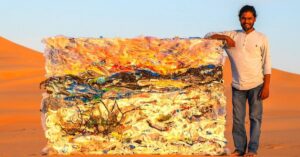 Manveer makes an effort to see that plastic doesn’t get enmeshed with Nature. For this, he collects plastic wrappers before it goes to the public dustbin. He is doing this since hard plastic gets collected for recycling, but it’s very tedious to collect wrappers for the same. For this now, he has been handling out boxes called “Habit Changer Boxes’’ to his neighbours in Delhi for them to dispose of their plastic wrappers. Through regular harvesting of plastic wrappers from the boxes, he collects plastic he needs for his art work. When he came to Bhubaneswar earlier and stayed for a week, he had distributed 40 such“Habit Changer Boxes’’.

As part of this METIS grant he will develop an artistic work on the endangered sea turtles on the concept of plastics and ocean survival in Odisha context. The artwork will be based on plastic waste to raise public awareness about recycling and the need to reduce consumption.

The METIS initiative is part of the French Development Agency (AFD) celebrating its 80th Anniversary on December 2, this year and for this the agency has planned events across the Indo-Pacific Region. AFD has decided to launch a global initiative METIS, to create a global public opinion on marine debris and pollution.

Under the initiative three nations are being added to celebrate the grand occasion, i.e. India, Mauritius and Indonesia. While this will encourage participation of artists in India to express their ideas relating to plastic waste production, management and its ill effects on the fragile coastal ecosystem, in Mauritius and Indonesia music and comics respectively would be used to create the public awareness. 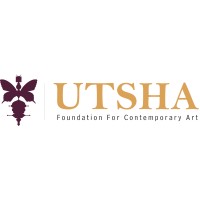 Currently, AFD is funding the City Investments to Innovate, Integrate and Sustain (CITIIS) Programme in Bhubaneswar and 11 other cities of India through the Smart City Mission. AFD is funding CITIIS Programme, supported by Ministry of Housing and Urban Affairs, European Union and National Institute of Urban Affairs, New Delhi.