Sundargarh district held a rousing reception for four hockey players from the district who were part of the Indian men’s and women’s hockey teams at the Tokyo Olympics 2020. The local heroes Deep Grace Ekka, Namita Toppo, Birendra Lakra and Amit Rohidas were given a traditional greeting with tribal folk dance with the sound of ‘Dulduli’, the popular drum of Western Odisha upon arrival at Veer Surendra Sai (VSS) Airport Jharsuguda. Later in the afternoon the players were felicitated at a grand function organised by the district administration Sundargarh. 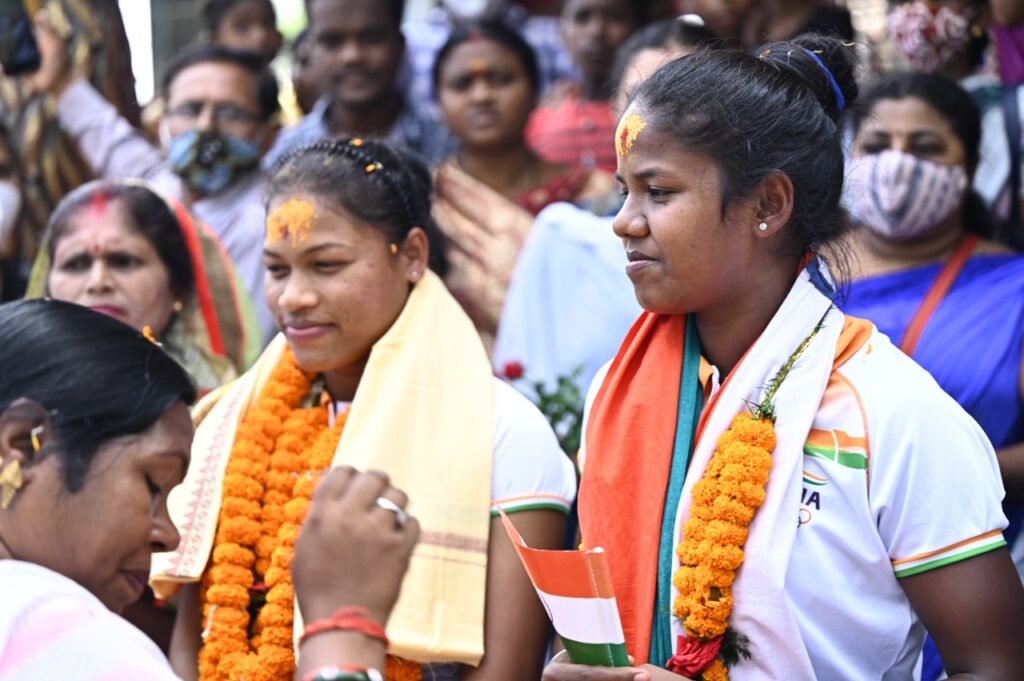 The four hockey stars from Sundargarh arrived at their hometown on Saturday after returning from the Tokyo Olympics. While the Men’s team ended a 41 year long drought by winning the Bronze, the Women’s team reached the semi-finals of the marquee sports event. These four players belong to the breeding ground of Indian hockey Sundargarh, which is going to co-host the Men’s Hockey World Cup 2023. 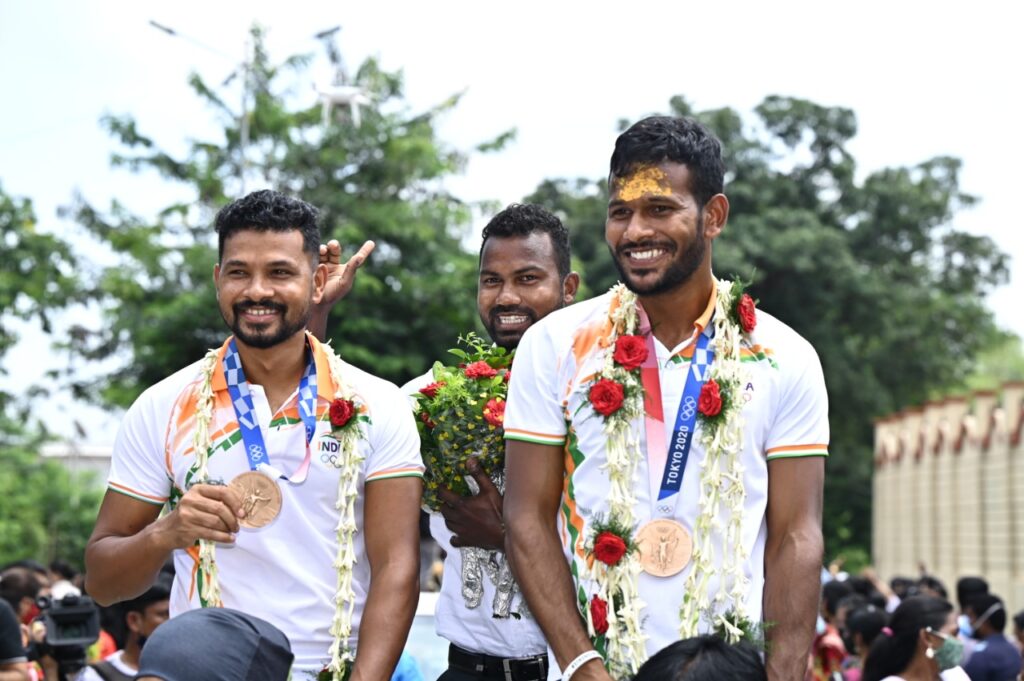 Upon their arrival at Veer Surendra Sai (VSS) Airport, Jharsuguda on Saturday morning, they were welcomed by a large crowd including their family members, sports fans and locals. On behalf of the Sundargarh district administration, Sub Collector Abhimanyu Behera greeted the players with a floral bouquet. The players were welcomed among cheers and slogans by hockey fans, the general public and various organisations. 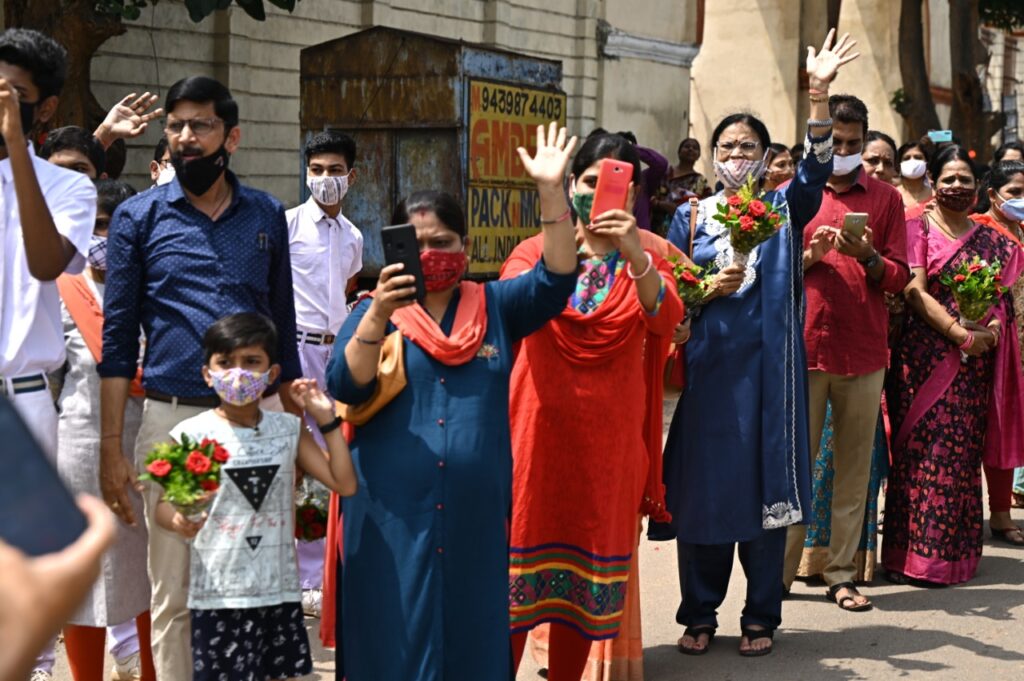 At Sundargarh, the hockey stars were taken in a procession in two open vehicles from Parijat Park to Circuit House going around the town. Hundreds of students, youths, women and the general public were present on the streets to cheer for them. People stood on either side of the road to congratulate the players. The Olympic medals on the Men’s hockey team mates shined as an ode to the pride of Sundargarh. 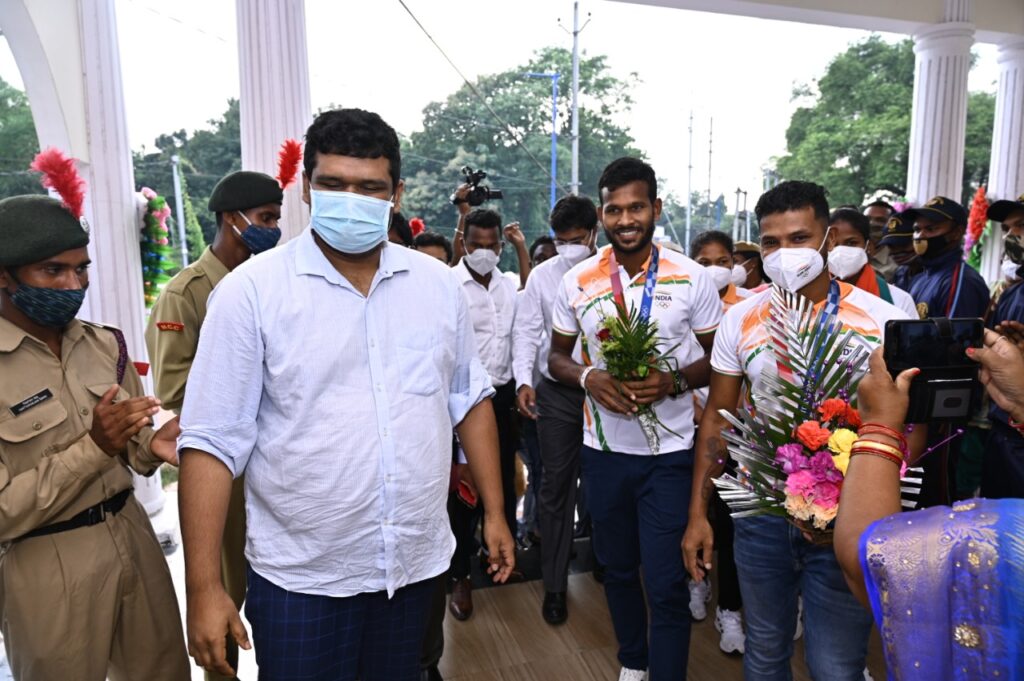 In the afternoon, a special felicitation ceremony was organized by the district administration at Vikash Bhawan in the Collectorate premises. “We welcome our champions back to their home soil. Entire Odisha and Sundargarh is proud of them. We hope that the hockey infrastructure in the district being developed by the state government will nurture more talents in the years to come. These players will inspire generations of sportspersons from Sundargarh who would hopefully make us proud again”, opined Collector Sundargarh Nikhil Pavan Kalyan. 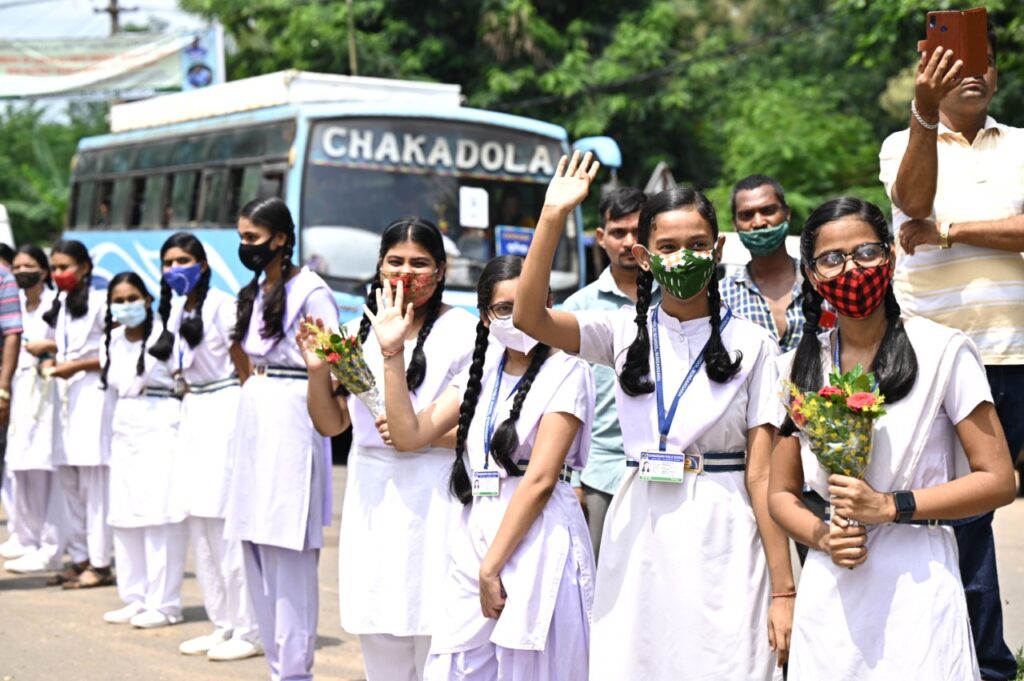 “The Indian hockey team has made our dreams come true by performing brilliantly at the Tokyo Olympics.  We are proud of the four athletes from our district who have competed at the Olympics. With the vision of Odisha Chief Minister Naveen Patnaik, the Indian hockey teams have taken flight. I hope the game will go further and better players will emerge from Odisha in the coming days,” said Padma Shri Dillip Tirkey, former captain of the Indian hockey team and present Chairperson Odisha Hockey Promotion Council. 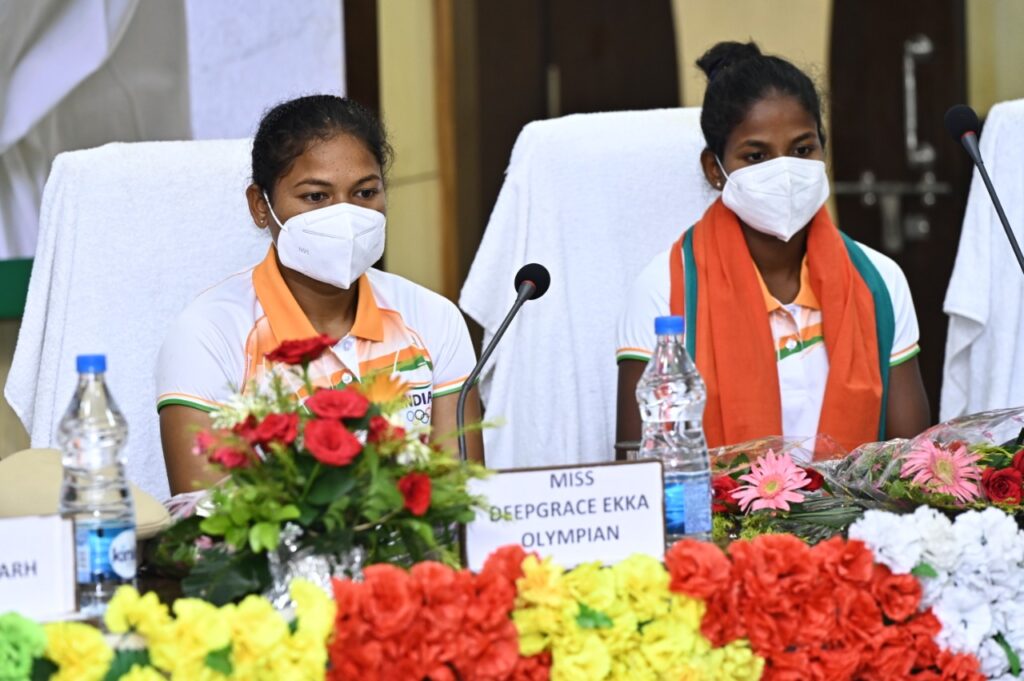 In response to the overwhelming reception at Sundargarh, Birendra Lakra the Vice Captain of Indian Hockey Men’s Team expressed his gratitude to the people of Sundargarh. “Odisha is going to have a great show in 2023 where Sundargarh will be an integral part of it as co-host. The state government is building the largest hockey stadium in Rourkela for the same. Moreover the Astro Turf fields being constructed across 17 blocks of the district will certainly be the breeding ground of the future hockey champions from India”, he said. 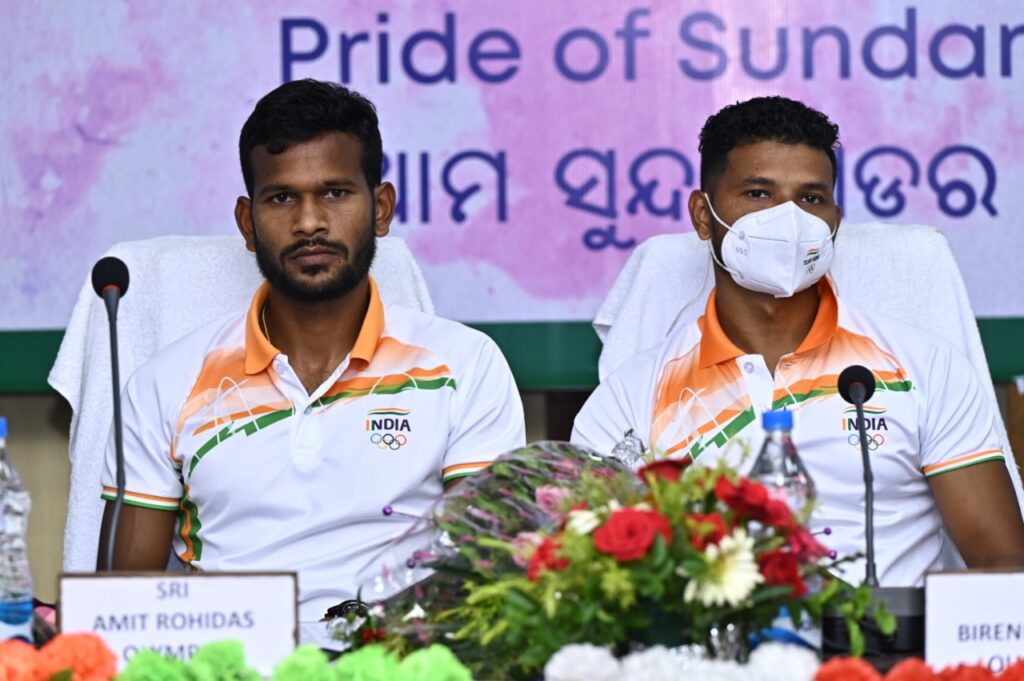 Deep Grace Ekka, the Vice Captain of Indian Women Hockey Team demonstrated the will power of the girls. “We played very well at Tokyo. Though we lost the game but we did not lose our spirit. We will practice even harder and bring home a medal at the 2024 edition of the games”, she said. 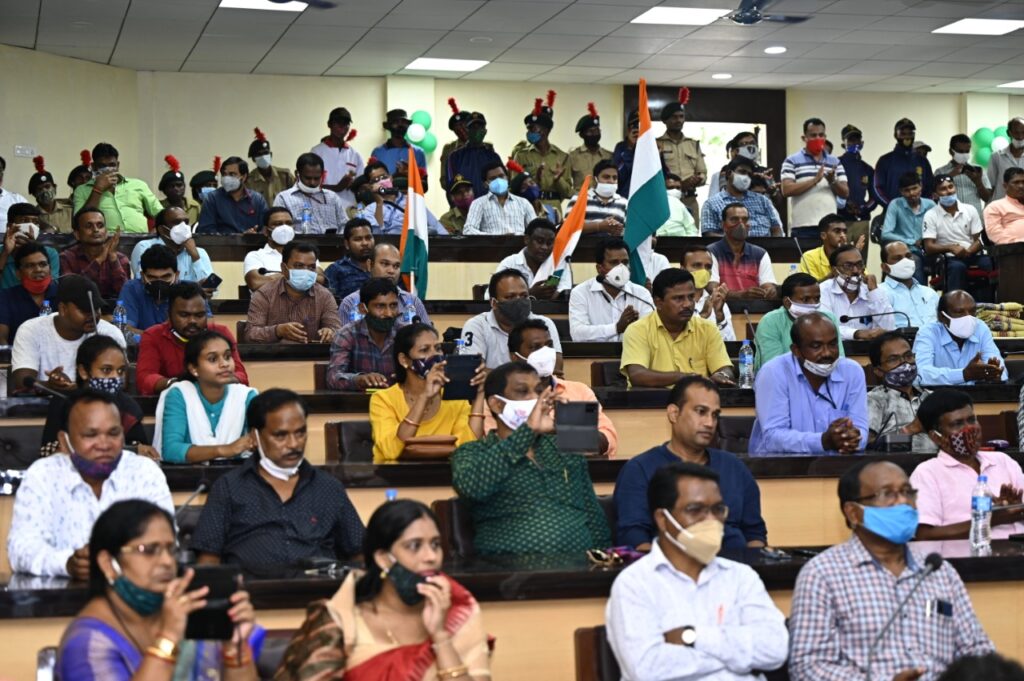 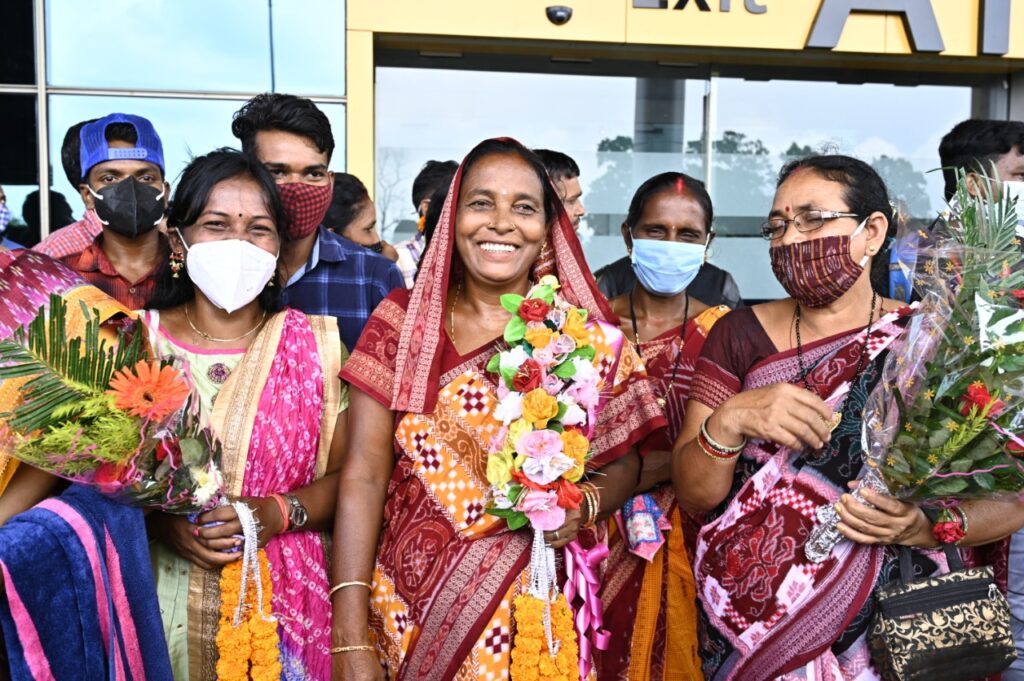 After the grand welcome and felicitation ceremony the players left for their native in Sundargarh. The players were away from their near and dear ones for many months working hard for Tokyo 2020.