“In times of any crisis, children and women are often the most vulnerable,” said Ghasiram Panda, National Manager for Prohibition of Child Marriage, ActionAid India, underlining the need for crisis response to incorporate children’s needs.

Giving his insights in the 12th episode of Kete Nua Bata, produced by OdishaLIVE and Swasthya Plus with support from UNICEF, Odisha, Ghasiram Panda focussed on the need to listen to children’s voices as we build back better after the COVID-19 crisis.

“It is vital for us to address the concerns of children, especially during a crisis like a pandemic. Children who are orphaned or live in difficult circumstances such as financially instability at their homes are particularly more vulnerable and need to be supported. Our actions supporting children should begin with hearing their voices about the challenges they face, and also empowering them with knowledge of their rights and support mechanisms they can reach out to.”

Support for children should also be aimed at strengthening their families to reduce the risk of their increased vulnerabilities in the future. The government and other organisations have set up several structures for the protection and welfare of children. There are child welfare committees at the district level for ensuring the protection of children. Child marriage prohibition officers have been deployed in various places. Similarly, there are many officers and institutions focussed on protecting children and upholding their rights. 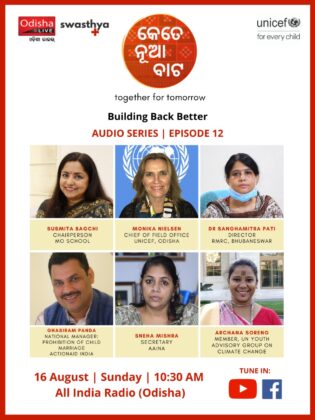 “We need to strengthen institutions that work for children and ensure that they reach the children in need. We should be able to build resilience among children to lead safe and happy lives in the face of crises,” believes Ghasiram Panda.

Each episode of the radio & digital series “Kete Nua Bata” contains new topics and the stories of COVID warriors. The 12th episode deals with ‘COVID-19: Building Back Tomorrow’. ‘Keta Nua Bata’, written and produced by Nilambar Rath, Founder & Editor-in-Chief, OdishaLIVE will have 13 episodes and shall go on air till August 23, 2020. As a part of the campaign, the media partners are carrying a series of stories across more than ten web and social channels. UNICEF’s popular animation and audio series, titled ‘Meena’, is also being disseminated under the ‘Kete Nua Bata’ campaign. 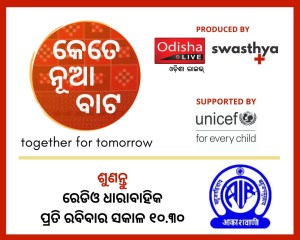