The Odia cultural space got a remarkable transformation in the colonial phase when parts of Odia-speaking areas remained with non-Odia speaking areas. This cultural space was sustained by Bhagabata Ghara in the rural areas, by the celebration of festive occasions like Jhulan, Melan, Chandan, Ratha Yatra, and Dasahara, by the performance of dance by Gotipuas and Maharis, Suanga and Rasa. 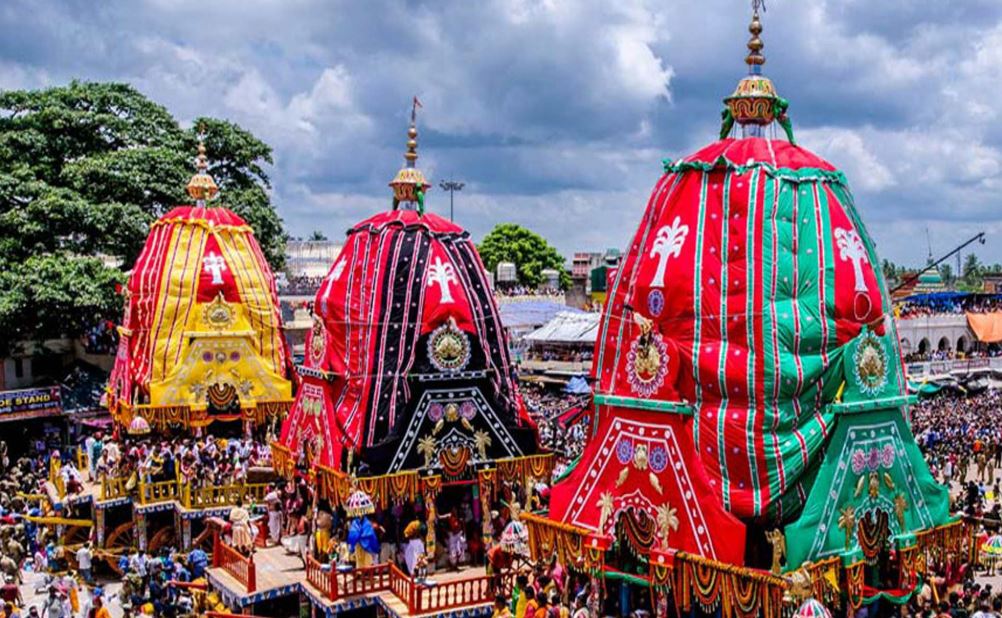 With the establishment of colonial administrative set up which demanded the interaction of several other races of India with the Odias, changes were marked in the cultural space. In the 20th century with the articulation of Odia identity, these elements of culture were freshly taken up and were accepted as its marker. (Dash 1978/1986:368-369, Mahapatra 1996:206-219) They used this cultural space for reconstructing Odian Odisha. Hence in this essay, our main emphasis is on the nature and programmes of Odia cultural space in the colonial phase in which despite the participation of other races some indices of Odia identity are clearly visible. 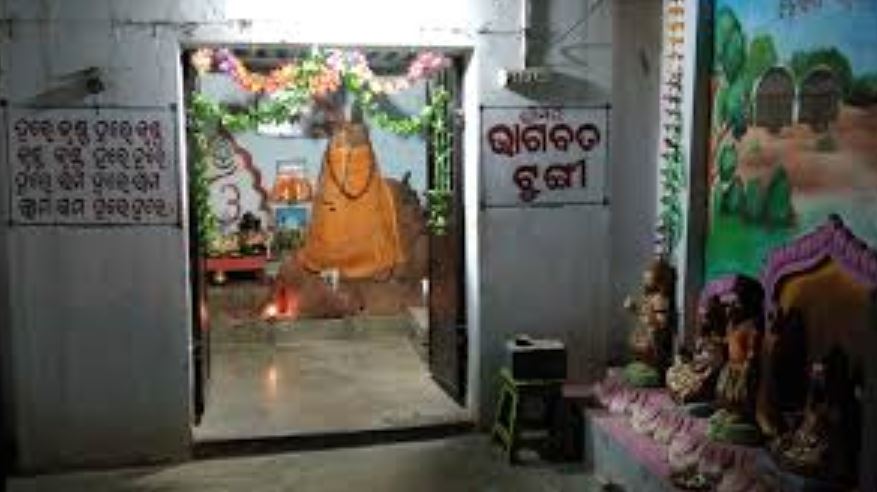 An important feature which had fostered popular Odia cultural space in medieval phase was the Bhagabata Ghara (Bhagabata Tungi). It had developed after the composition of Odia Bhagavata by Jagannath Das in the period of the Suryavamsi king Prataparudra Deva. (Mukherji 1953:142-145) A map prepared by H.von Stietencron on the distribution of Bhagabata Tungis in different parts of Odisha on the basis of information supplied by the Endowment Commissioner’s Office indicates that Bhagabata Tungis were more widespread all over the regions of lower and upper level of Mahanadi, (Dash 1996:37) The Bhagabata Tungis in Sambalpur are more numerous than that of Cuttack. In different parts of western Odisha (Bolangir, Khariar, Kalahandi, and Bamanda) there was great popularity of Jagannatha. Hence there might have some arrangement for the study of Bhagabata in the rural centres called Bhagabata Ghara. It not only imparted religious teachings but also moral teachings to the rural folk. (Sukla 1986:115-121) It served as a place of inspiration and guidance for the village community as to how to lead a civilized life. It had given opportunity in medieval phase as to how to build sound characters. (Singh 1959:148-149) Bhagabata Gharas had asserted the medieval rural Odia identity as it was the main centre of rural Odia culture. The Bhagabata Ghara which articulated multifarious cultural activities of the rural Odias became very attractive centre during the Dol and Melana festivals. The two festivals were very popular in medieval Odisha. A great marker of Odia cultural identity was the melan (congregation of gods)when Radha- Krishna images from different villages could gather at a particular central place which was the scene of various cultural activities. 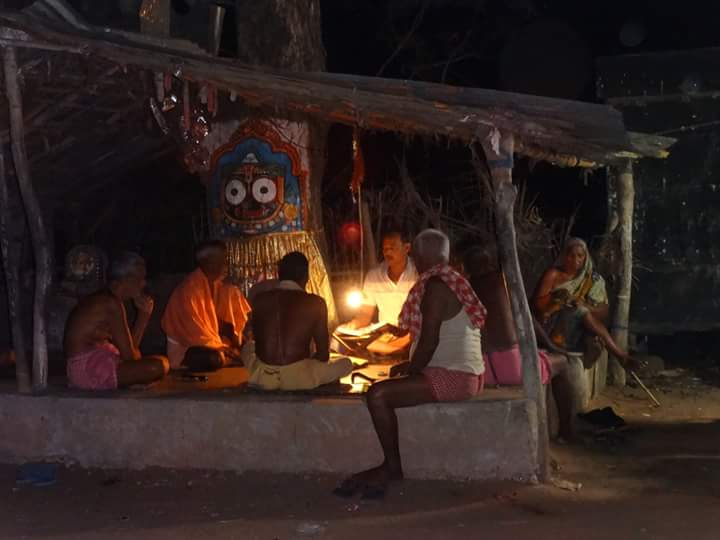 In the colonial period Bhagabata Gharas acted as libraries, night schools and places of religious discourse. (Asha,30th March 1914) Bhagabata vilas was an important part of the  Odia cultural space in rural areas which was due to the spread of Bhagabata Tungis in different parts. The Odias listened to Bhagabatas in the night in the Tungis and then started to recite Bhagabata versions in their homes. It is therefore interesting to know about the  process of Bhagabata recitation.(Mahapatra 1926) First of all the rural people set up a vimana or khatuli on a throne and they set up the image of patitapabana or Trimurtti (three images-Jagannatha, Balabhadra and Subhadra) in front of the Vimana. On the back side of the images the Bhagabata books (in palm leaves) in order to be used from the first to the seventh for reciting for seven days have to be kept with the arddhamatra of Chandan and Tulasi and other flowers on them.On the front of the images a sacrificial pit (Yajnakunda) is to be made by sand and muruja. In the north part of the kunda earthen pots are to be set up and in its north western side Brinda(planting Tulasi in Kodua) is to be set up. The Khatuli or vimana is to be beautifully decorated. There should be wide space in front of the images. Four singers and one priest are to be employed for the ritual. In the middle part between the images and the sacrificial pit Salagramachandra is to be present. The priest in a Sankirtana party should go and lift the Salagramachandra from the selected place and place it on a khatuli covered with a new cloth by the ritualistic process. He should place the khatuli(small cot) on his head and circumbulate on the sides of the gods in the throne and place the khatuli and pay reverence to it. Then again he is to proceed with khatuli. With the Sankirtana party they have to go to a selected place for bathing the Salagramachandra with Tulasi and flowers. Then the khatuli consisting of Salagrama is tobe placed before the images of the throne. First of all the deities are to be worshipped in the Kalasa. Then the images and Salagrama are to be worshipped. The place should be like Naimisaranya. Bhagabata versions are to be recited for seven days which is called Bhagabata Sapta. 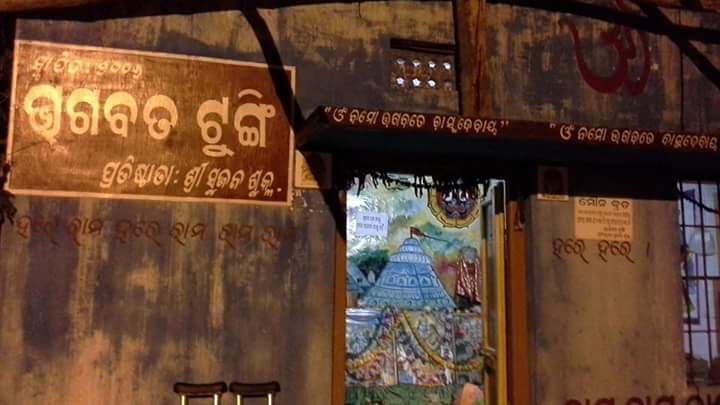 In the 1920s Bhagabata vilas was well known in several rural families. But Bhagabata Gharas remained inactive. (Asha, 30th March 1914) In an editorial note in Asha Gopabandhu Das, a famous  Odia nationalist, insisted on the revival of the activities of the Bhagabata Ghara which would assert Odia identity which was then fragmented. The Odia nationalists felt during that time that in order to make the mission of the Utkala Sammilani successful the  Bhagabata Gharas should be used as the centres to spread the Sammilani activities for mobilizing the Odias. They asserted that the Bhagabata Gharas were associated with the communitarian activities of the Odias in the medieval phase and they should be revived to articulate Odia identity.