NabakrushnaChoudhury (the younger son of GokulanandaChoudhury of Jagatsinghpur) was one of the most important makers of modern Odisha who had devoted fifty years of his active life to the political, social and economic progress of colonial and post-colonial Odisha. He came to the focus of politics at a crucial phase of Odisha-in-making. His active political career started in the fourth decade of the 20th century and it continued till his death. He was unforgettable for his socialistic ideas and experiments, participation in the peasant movement and the movement in the Princely States of Odisha, his constructive activities in the Gandhian phase of nationalism. 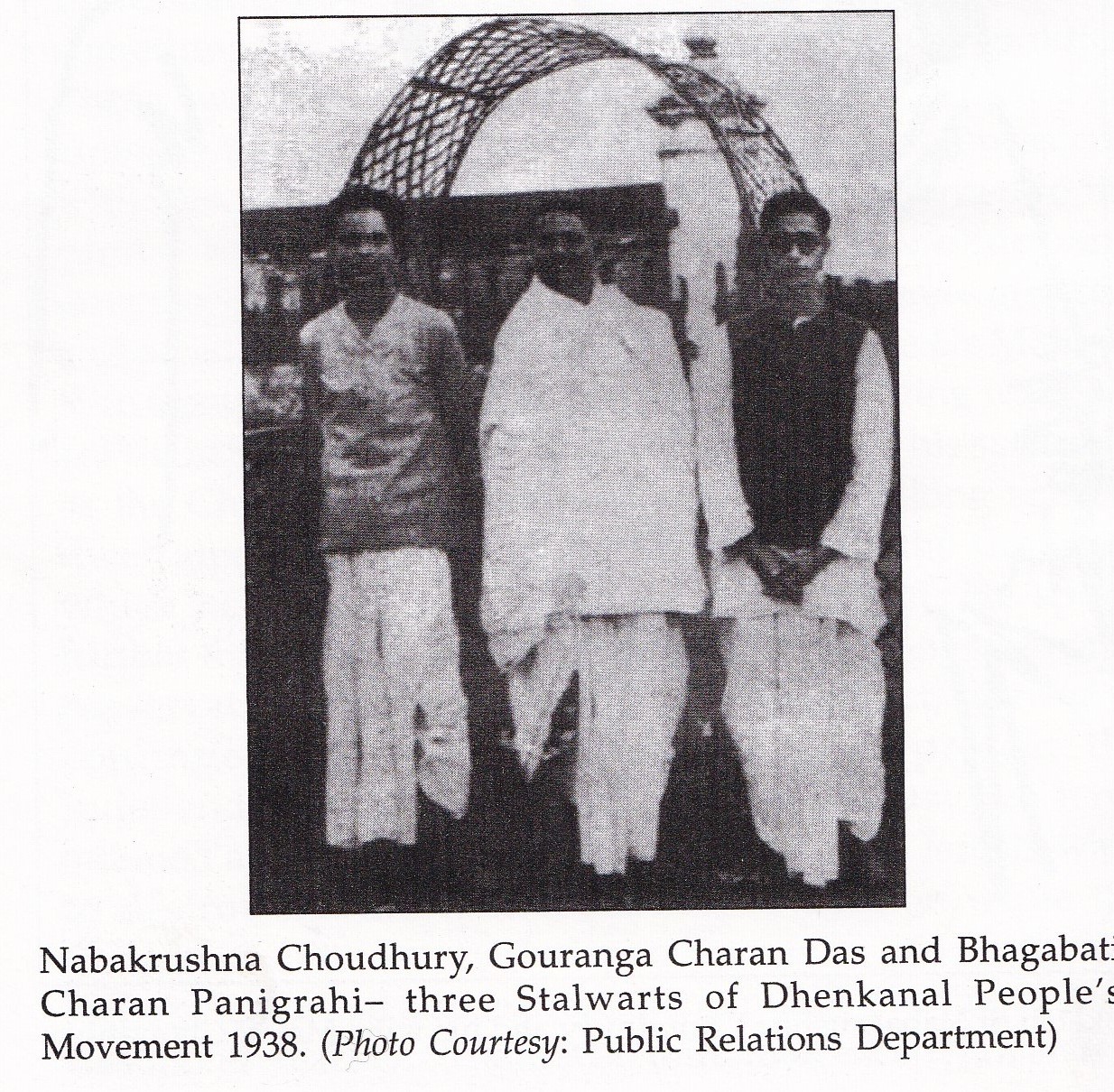 His revolutionary and constructive activities in the nationalist phase in Odisha have been appreciated and critically viewed by his friends and critics and it is difficult to give an opinion on the success and failure of his experiments. But his endeavour in the development of the socio-economic situation in colonial and post-colonial Odisha have been accepted by historians as a remarkable chapter of the history of modern Odisha.

The fourth decade of the 20th century witnessed the expansion of his socialistic ideas in Odisha under the leadership of Congress activists. An Association of socialists entitled SamyabadiKarmeeSangha was formed under his leadership in Jagatsinghpur in February 1934. It was reorganised by the principles adopted by the All India Congress Socialist Conference . Gangadhar Mishra, Gokul Mohan Raichudamani, Gaura Chandra Das, Gobinda Mishra, DibakarPattnaik, Malati Choudhury, SurendranathDwibedy, and many others were the members of the Association. Nabakrushna had a very important role in the organisation of the Association. He also on behalf of that SamyabadiKarmeeSangha edited a weekly paper called Sarathi  to express his socialistic ideas from March 1934. 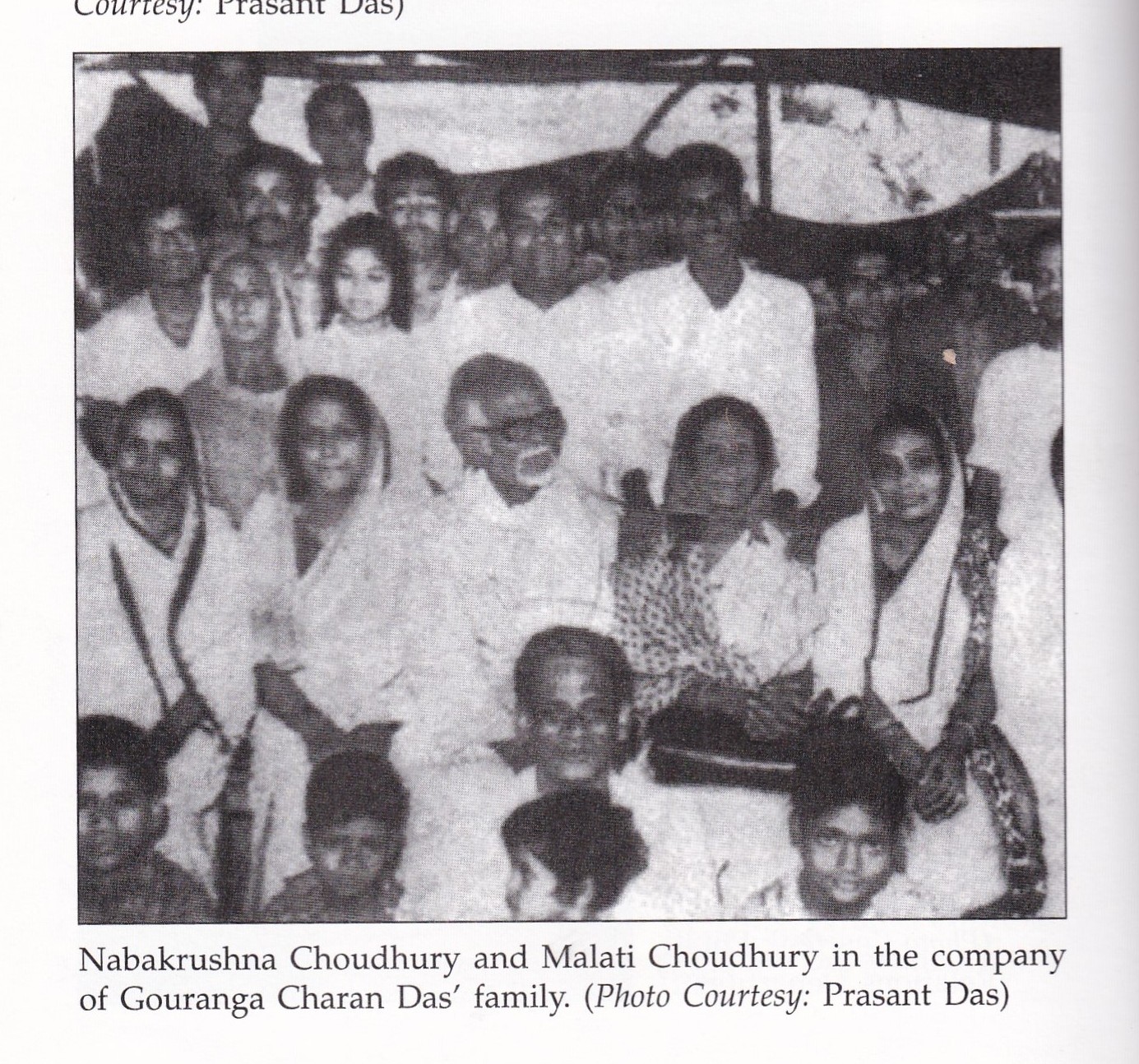 By 1936 his socialist thought was well known in Odisha as he had presented a thought provoking note on scientific socialism in Adhunika-the mouthpiece of NabayugaSahityaSansad- of July 1936. According to Choudhurysocialism (samyabada) is not one specific view-point, but a plurality of ways and methods to translate the ideas for a new social order. He had taken into consideration the historical materialism of Marx and his analysis was an indication of his extensive study of Marxist literature. While he was making an experiment of socialism in Odisha, his attention was actually drawn to the peasant problems. As the president of the peasants meeting at Khurda in September 1936, Choudhury stated that the future lies in the hands of the workers and peasants who can only establish a society of peace and plenty. There he exhorted the peasants to stand fearlessly by their rights and save their own class and country from ruin. He was a prominent member of the working committee of the Utkala Provincial KrushakSangha of 1936. As a prominent socialist leader Choudhury participated in the second session of the Utkal Provincial Kisan Conference which was held at Puri on the 15th November 1936 under the presidentship of Swami SahajanandaSaraswati of Bihar. In the conference, Choudhury urged on the fulfillment of some demands.

Let the peasants who are unable to pay tax be freed from taxation.

Due to the depression the prices of rice and similar other corns have increased leading to the deplorable condition of the peasants. Hence the taxation needs to be reduced.

Let the assessment of tax be so changed that the peasants whose income is more than Rs 250 a year only have to pay tax.

Let the canal revenue be reduced and arrangements be made to irrigate the lands where there is scarcity of water.

Let there be a commission to enquire into the debts of the peasants and the realisation of loans be stopped for five years.

For the benefit of the peasants let the bankruptcy law be introduced.

Let the names of the moneylenders be registered and arrangements be made to stop the seizure of bullock, ploughshare, living house and useful utensil.

Let the officer conducting the auction sale fix a minimum price of the land coming up for auction sale and  let there be no auction sale at less price than the price fixed by him.

The Zamindars should not be given the power of certificate.

Let such an Act be passed which will provide the payment of tax by moneylender and Zamindar- who do not accept it will not get the tax for the kisti for which the money was sent.

The illegal dues of the Zamindars should be stopped.

The tenants should be given the power to cultivate such lands which are lying waste.

Let there be arrangements for arranging free primary education.

Let there be law that hospitals and other such good works be done from the income of Debottar and Pirottar lands.

These demands were unanimously accepted by the participants in the conferfence. 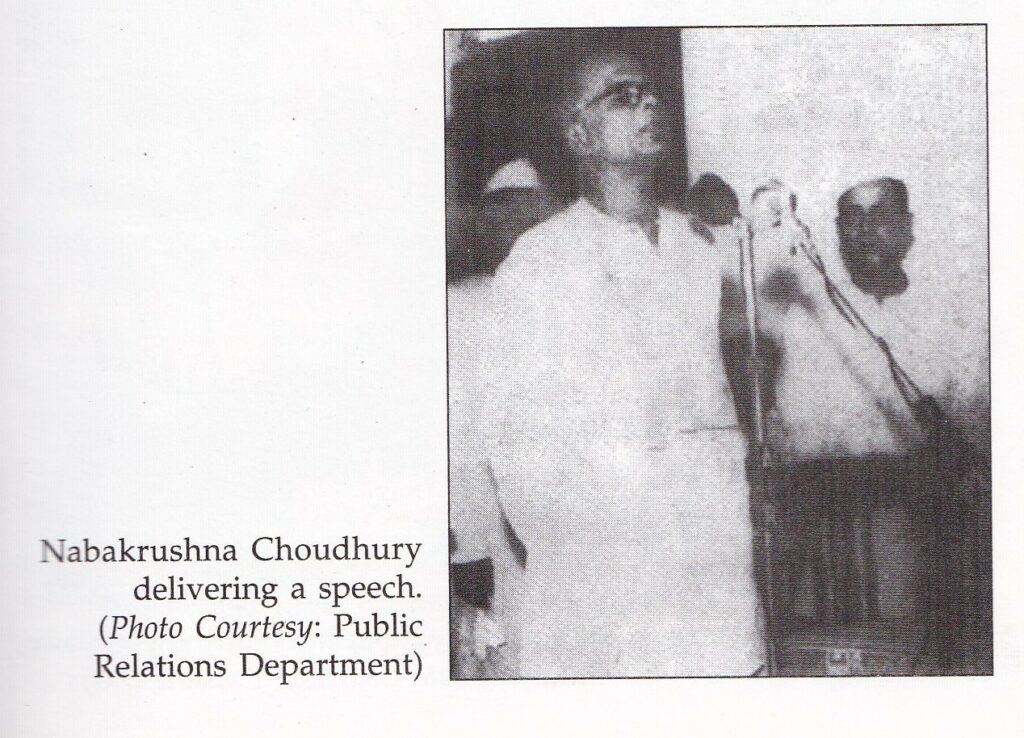 Choudhury`s interest in the affairs of the peasants began increasing from 1936. On November 29 1936 he had also attended the Peasants Conference in Calcutta and was one of the presidents of the session.The other members of his team in the presidential chair were BhagabatiPanigrahi, KrupasindhuKhuntia and NarendranathMajumdar. In his address Choudhury gave emphasis on the situation of the world and the future of it. He described that the plight of the workers and peasants was due to capitalism and imperialism and hinted at a world-wide revolution to strike them out. Choudhury`s struggle to establish socialism in Odisha began and he was instrumental in the formation of KrushakSanghas in the villages. In many meetings of this time he had articulated the sufferings of the peasants and demanded their ceaseless battle against the exploitative nature of the landlords.

When the peasant agitation was widespread in Odisha, the Princely States saw an awakening. Choudhury had a major role in shaping this situation. His centre of activities for the people`s movement was in Dhenkanal. The socialists of Odisha had decided to take up the Dhenkanal case in earnest under his leadership. Before that the Satyagraha movement in Dhenkanal and other states were taken up by the residents of the states at the instance of the Odisha Socialists. But in 1938 fearing that there were signs of setback in the movement the Odisha Socialists headed by Nabakrushna and MalatiChoudhury had resolved to go in batches inside the State to offer Satyagraha. They had followed the line of action of the Hyderabad agitation. Provisionally three batches had been fixed up. Nabakrushna with Malati and BhagavatiPanigrahi were in the first batch. The main reason of Nabakrushna`s launching the Satyagraha was to draw the attention of the High Commands of the Congress who had so long been expressing sympathy. The Socialists were also bound to come forward to launch the Satyagraha as they had already been a party to this movement and when there had been signs of despair among the people, the only alternative left to them was to lead the movement. He took up the political and social uplift of the Kisans by organising district and village Sabhas most of which were affiliated to the Provincial KrusakSabha. Although Nabakrushna faced challenges from the side of Nilakantha Das and H.K.Mahatab on the existence of independent KrushakSabha, he continued to fight for its existence. 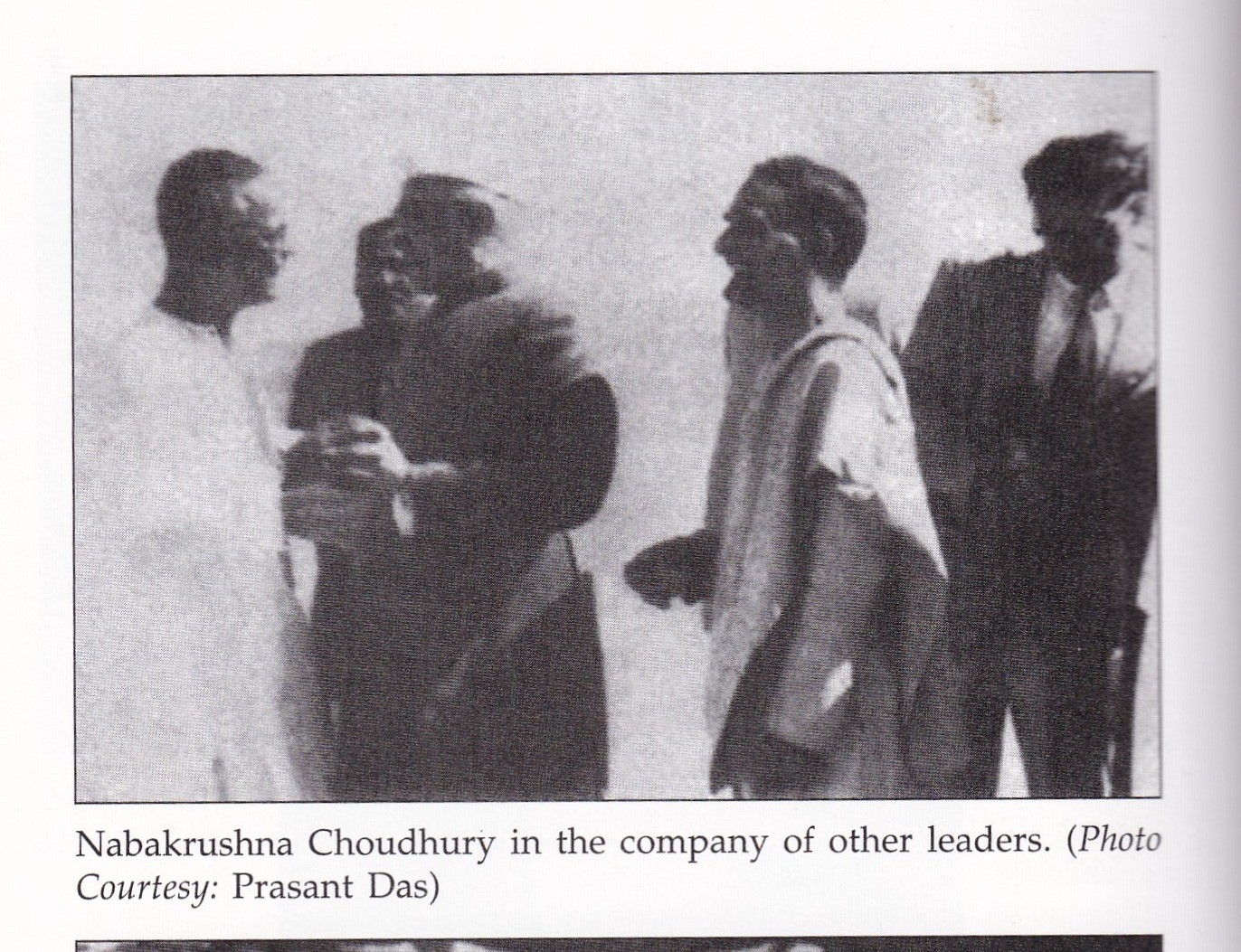 The most important event in the career of Nabakrushna during this phase of peasant unrest in Odisha was his long talk at the Peasants` Day Meeting on First September 1938 at Jenapur of undivided Cuttack. The speech formed a significant part of the socialist and political discourse of the colonial Odisha. He demanded the unity of the peasants and workers in his address. He classified the Rajas and Zamindarsas capitalists and denounced them. The anti-colonial nature of Nabakrushna was well-known during the course of the Second World War. He had delivered a lengthy speech on the international situation and the attitude of the Congress towards the War in a meeting on 3rd July 1940 at Tukuda. in 1942 at Salepur his anti-British speech was considered prejudicial by the Government. There he also demanded the unity of the peasants and workers. They would be able to suppress the tyranny of the Zamindars and the British master.

After the independence of the country he was the chief minister of Odisha after the resignation of Mahtab in the 1950s. But during his tenure the famous boundary expansion movement began and he had to face a critical situation. There was a great debate in the Odisha Legislative Assembly on the report of the States Reorganisation Commission on  26th and 28th November 1955. NabakrushnaChoudhury as the Chief Minister of Odisha had a prominent role in this debate in which Nilakantha Das, Godavarish Mishra, RadhanathRath, NishamaniKhuntia, PratapKeshariDeo, AchyutaMahanada and many others were the great participants. Choudhury had a clear idea despite the strong demand for the expansion of Odisha for the inclusion of all Odias. He was indeed not in favour of this movement as he stated in the end of the debate-“Today there are many other problems facing us, how equal opportunities will be available to all our people, how the poorer sections will not be oppressed, how the landless people will be given lands. These are according to us bigger problems and some of us are engaged in solving them. But we realise that unless these problems sink down to the minds of the common people, nothing can be achieved. A correct adjustment of boundaries is important only to the extent to which it contributes to the more important problems enumerated above. The problem of poverty, the problem of landless workers, the problems of inequalities of income are the main problems facing our new regime. The problem of rectification of boundaries is a minor problem and is important only to the extent to which it contributes to the bigger issues. If the Odias and Hos live together under Odisha we can solve the bigger issues much more easily. If we donot consider the whole aspect from this angle and simply are swayed by feudal sentiments that we are losing such and such territories , we will miss the main issue. I am afraid this feudal mentality is getting too much of a hold on our minds.”This is indeed a masterpiece of his socialism but in the midst of that tumultuous phase Nabakrushna resigned and devoted his later period for Sarvodaya activities. More interesting was his concern for the official recognition of Odia language though he could not agree to the boundary expansion for the inclusion of all Odia-speaking areas.