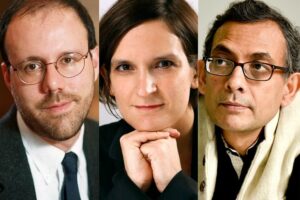 Prof. Abhijit Banerjee, Prof. Esther Duflo and Prof. Michael Kremer who have been awarded Nobel Prize for Economics this year (2019), strongly believe that global poverty alleviation is stymied by three Is: Ideology, Ignorance and Inertia.

Busting the myth that poverty can be eliminated through Aid (Jeffrey Sachs) or Free Market Model (William Easterly), the three recipients strongly believe that the fight against poverty has to be based on scientific evidence, Using random control trials and most importantly speaking to the poor.

Providing free textbooks will not help without better and more tailored teaching. Five million children in Kenya benefitted from remedial teaching. We need to abandon the habit of reducing the poor to cartoon characters and take time to understand their lives in their complexity and richness. 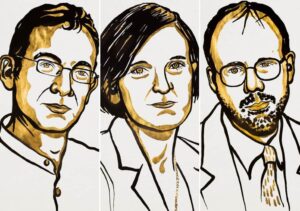 Both Prof. Banerjee and Prof. Duflo believe that big changes are not the result of big levers or big push as Prof. Paul Rosenstein Rodan contended, but small changes like providing mosquito net or bleaching powder or medicines to cure earth worms in poor children.

Prof. Duflo writes that a bottle of chlorine costs 18 cents and can reduce diarrhoea by 45 per cent. Yet only 10 per cent of population actually use bleach to treat their water. Similar predicament is faced by poor people who have low demand for bed nets. They believe that these small interventions by the state which cost very little can be most effective than a free aid ideology model.

Prof. Kremer did this experiment in Kenya in mid-90’s and Prof. Banerjee and Prof. Duflo in Mumbai and Vadodara which have helped poor people immensely. Prof. Duflo is the second woman to win the Nobel Prize in Economics.

When asked to comment on this she said ‘it will hopefully inspire more women to take up research and more men to respect the work of women’. For these economists, “we cannot helicopter people out of poverty”. 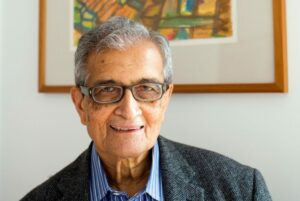 Prof. Amartya Sen got Nobel Prize in Economics in 1998 for developing human development index (HDI), which brought to the forefront the importance of spending more on education and health.

However, for Prof. Banerjee and Prof. Duflo, the intervention for the poor should be based on evidence and not on ideology. Doles to the poor will not work. .India can profit immensely from such a refreshing approach to public policy.

Prof. Abhijit Vinayak Banerjee was educated at the University of Calcutta, Jawaharlal Nehru University and Harvard University, where he received his Ph.D in 1988. He is currently the Ford Foundation International Professor of Economics at the Massachusetts Institute of Technology. 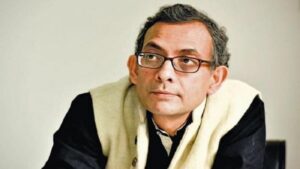 In 2003 he founded the Abdul Latif Jameel Poverty Action Lab (J-PAL), along with Esther Duflo and Sendhil Mullainathan, and he remains one of the lab’s directors. Banerjee is a past president of the Bureau for the Research in the Economic Analysis of Development, a Research Associate of the NBER, a CEPR research fellow, International Research Fellow of the Kiel Institute, a fellow of the American Academy of Arts and Sciences and the Econometric Society, and has been a Guggenheim Fellow and an Alfred P. Sloan Fellow and a winner of the Infosys prize.

He is the author of a large number of articles and four books, including Poor Economics, which won the Goldman Sachs Business Book of the Year. He is the editor of three more books and has directed two documentary films. He also served on the U.N. Secretary-General’s High-level Panel of Eminent Persons on the Post-2015 Development Agenda.

Prof. Esther Duflo is the Abdul Latif Jameel Professor of Poverty Alleviation and Development Economics in the Department of Economics at the Massachusetts Institute of Technology and a co-founder and co-director of the Abdul Latif Jameel Poverty Action Lab (J-PAL). In her research, she seeks to understand the economic lives of the poor, with the aim to help design and evaluate social policies. She has worked on health, education, financial inclusion, environment and governance.

Prof. Esther Duflo’s first degrees were in history and economics from Ecole Normale Superieure, Paris. She subsequently received a Ph.D. in Economics from MIT in 1999. Duflo is the Editor of the American Economic Review, a member of the National Academy of Sciences and a Corresponding Fellow of the British Academy. 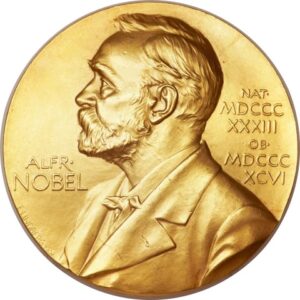 Duflo has received numerous academic honors and prizes including the Princess of Asturias Award for Social Sciences (2015), the A.SK Social Science Award (2015), Infosys Prize (2014), the David N. Kershaw Award (2011), a John Bates Clark Medal (2010), and a MacArthur “Genius Grant” Fellowship (2009).  With Abhijit Banerjee, she wrote Poor Economics: A Radical Rethinking of the Way to Fight Global Poverty, which won the Financial Times and Goldman Sachs Business Book of the Year Award in 2011 and has been translated into more than 17 languages.

Prof. Michael Kremer is the Gates Professor of Developing Societies in the Department of Economics at Harvard University. He is a Fellow of the American Academy of Arts and Sciences, a recipient of a MacArthur Fellowship and a Presidential Faculty Fellowship, and was named a Young Global Leader by the World Economic Forum.

Kremer’s recent research examines education, health, water, and agriculture in developing countries.  He has been named as one of Scientific American’s 50 researchers of the year, and has won awards for his work on health economics, agricultural economics, and on Latin America.

He helped develop the advance market commitment (AMC) for vaccines to stimulate private investment in vaccine research and the distribution of vaccines for diseases in the developing world.  In the fall of 2010 he became the founding Scientific Director of Development Innovation Ventures (DIV) at USAID. Dr. Kremer received his PhD in Economics from Harvard University. He is a member of the board of Precision Agriculture for Development.